I sleep in. And by “sleep in”, I mean “purposely roll back over when my alarm goes off”. Twice. We’ve already crossed Evolution, all matte in the morning’s shadows, so there’s no rush to get out. I’m aiming for a 7a leave time, and I hit the nail firmly on the head.

I have a lot of down to do, then a lot of up, and finally some more down to accomplish. So it’s down along Evolution, who shows me why it’s so important not to slip at the crossing: 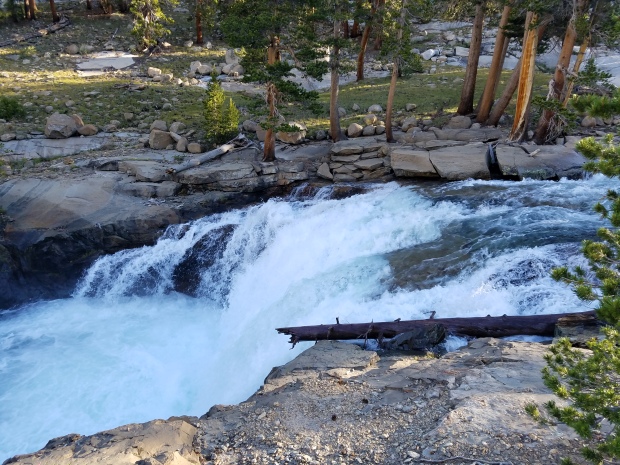 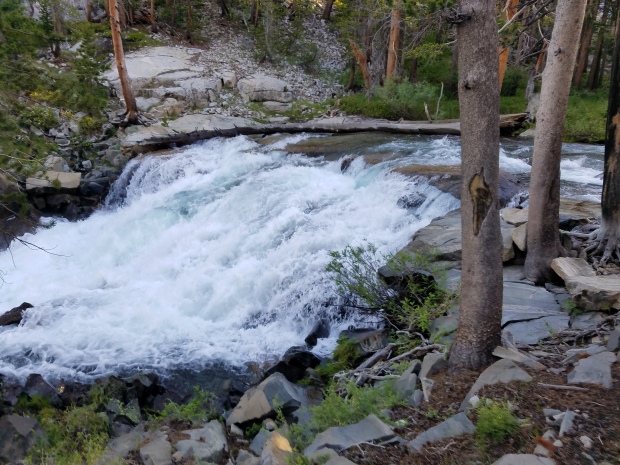 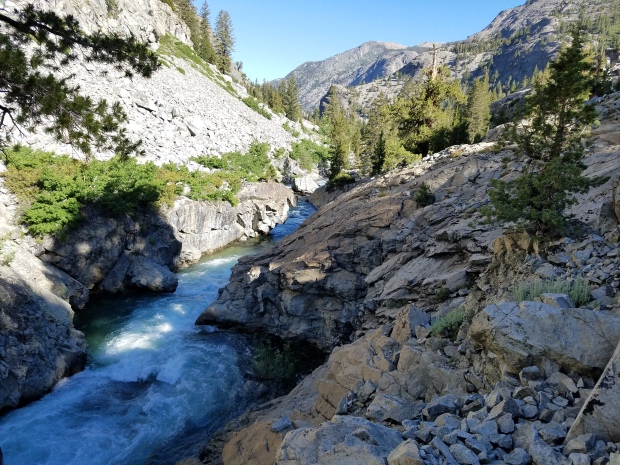 Anyway. It’s a nice enough down, I suppose. Tree-lined and not too tricky, but tricky enough that I have to pay attention. Which I am, intently, because there aren’t any places to dig a cathole.

When I finally find a space, something loud and breathy is nearby. All I need is to get surprised by a bear while pooping. That’ll teach me to… Something. Poop faster? But the thing never comes and the breathing sounds like maybe a bird, so I guess I got lucky. 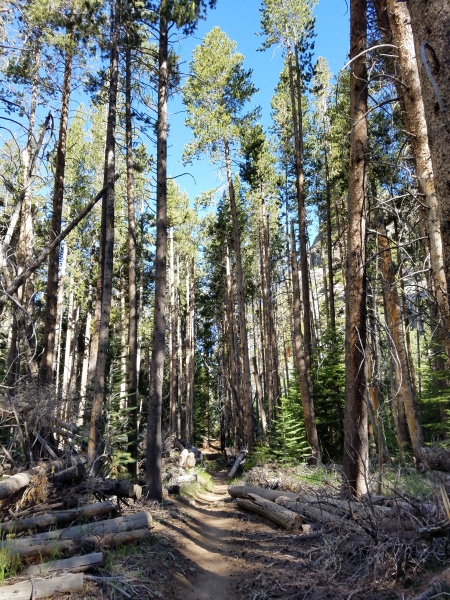 More down, and not really a view to be had, so I pop in my earbuds for more podcasts. Eventually, Stuff You Should Know leads me to a bridge, and just like that I’m out of Kings Canyon National Park.

I meet some day hikers just after the bridge who tell me to try Muir Trail Ranch’s hiker box, so it’s down and then down some more, extra mileage to MTR.

I ask if I can add the HEET and the Nalgene bottle I found to their hiker box; I’m told I can put whatever in and take whatever out. Groovy. There’s not much there, but a lovely couple shortening their JMT section gives me their extra, and I supplement with the stuff newly hiker boxed by another group grabbing their boxes. After some sorting and some postcard sending, I’m on my way.

Kind of. I have some intestinal distress, and things get a little weird for a bit, but then it’s up, up some extra from MTR to some ungodly switchbacks on the way up Selden Pass. Moar podcasts to distract me! 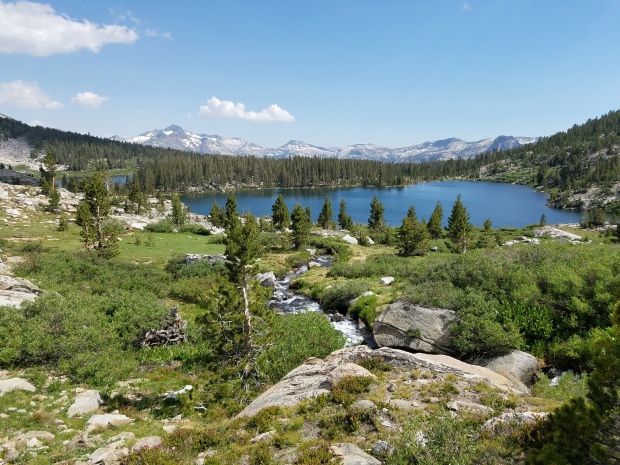 Eventually, the climb chills out, leads up to a number of lakes in meadows and rocky streams that are nice, but I’m kind of pressed for time.

So, the pass! And holy hell, the other side! 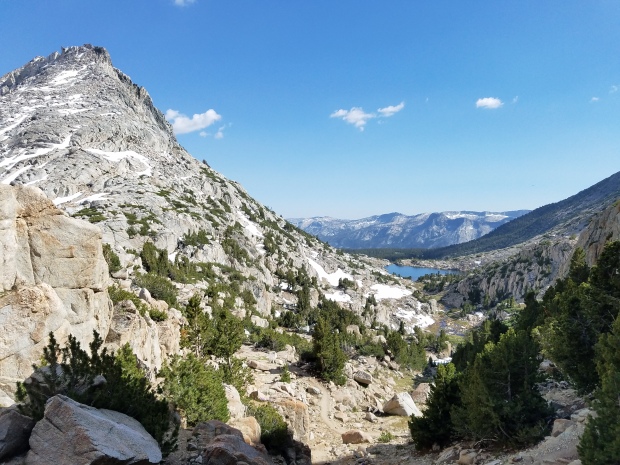 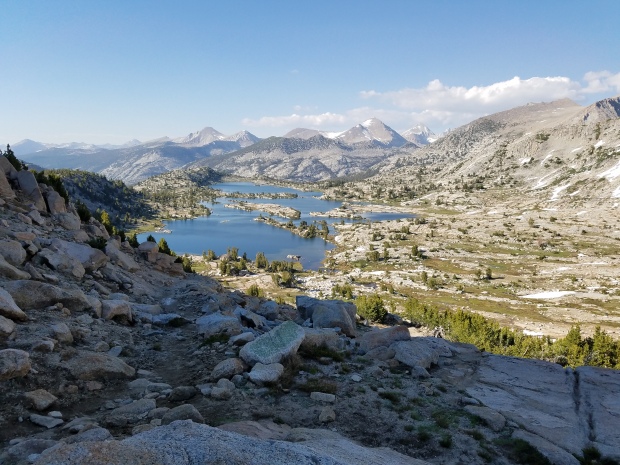 There’s a father and two sons from Cleveland taking pictures for their JMT slideshow, and I fall into conversation with one of the sons. He’s clearly interested in the PCT; I hope he hikes it one day. I meet Moonshadow going Southbound after flipping to mile 1500; she’s going to mile 800, and then it’s back north for her again. Dang. I wish her well; she’s so close! And then she’ll be at mile 1500. Such numbers seem out of my reach for now.

Just as I’m finishing dinner, Cool Beans pulls up, chats for a bit. Then it’s down the hill to Bear Creek, to meet Yoda. 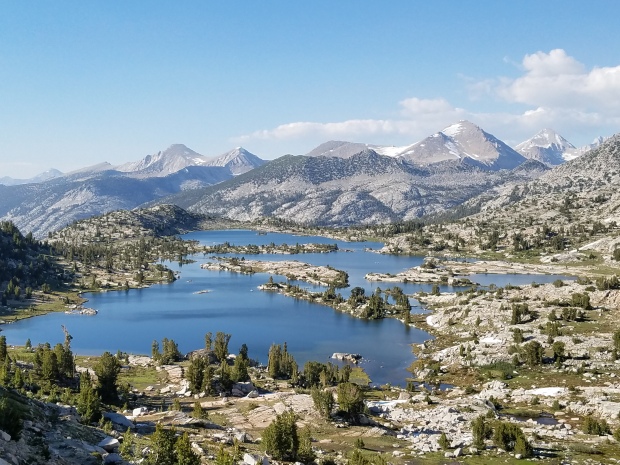 Marie Lake is beautiful, stunning, sublime, and I almost camp there – it’s everything my heart desires, but I know I’m supposed to meet Yoda and I know I’m already super late. I take a moment, and hope I can make it back here sometime in my life. Even if it’s just to camp. Even if it means I have to do all these passes again. Just beautiful. 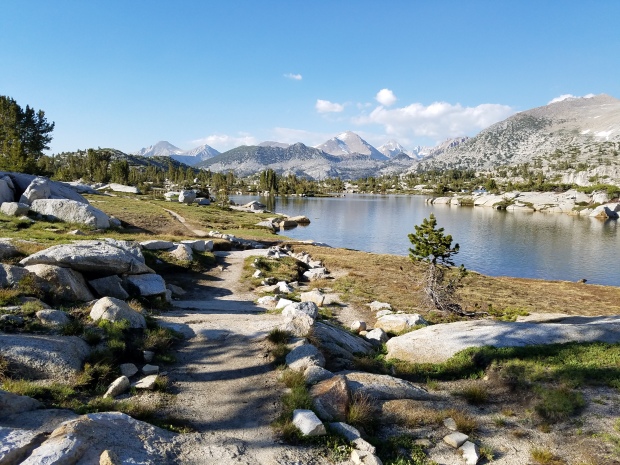 Winding down, down, the sun threatening to go behind the mountains – it’s later than I’d like, but I dallied with Marie, so I have to pay the price. 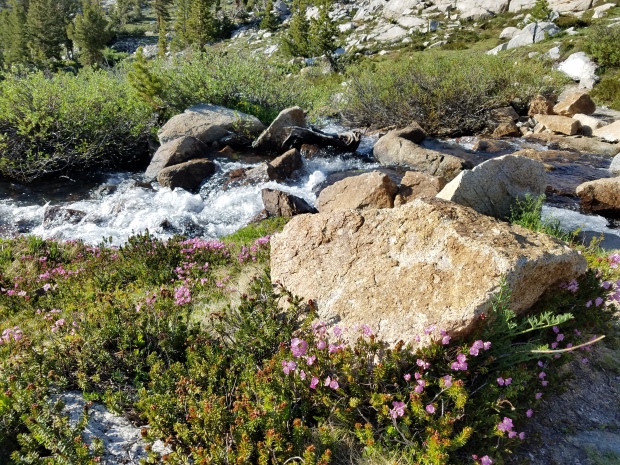 Ive never been walking when this has happened thus far, but holy shit. I stop for water and they’re all over me; I stop to check the mileage and they’re all over me; I’m walking, actually moving, and I can feel them brushing my bare legs trying to land. I should be more concerned about Bear Creek when I come to the crossing, but I practically fly across the damn thing – with Cool Beans right behind me – in a futile effort to escape the mosquitos.

On the other side, there’s only one meh spot, and it’s covered in mosquitos; if only I walk some more, maybe I will escape. So I go another mile – past who is maybe Yoda? But if so, she’s camping on the grass, and nah, and also she went past our meeting point so she prolly wanted to be alone – until there’s a flat spot big enough for two, and I invite Cool Beans to stay, too. Misery loves company.

I understand what Spesh meant when he talked about being driven mad by mosquitos. And I could’ve stayed with Marie tonight – which, at the time, was mosquito-free. Womp womp. I won’t make the mistake of not-listening to my gut on such things again.

Still, I’m within 9 miles of the Vermilion Valley Ranch side trail, and I’m gonna have a celebratory afternoon tomorrow, I’ve decided. Maybe I’ll even make it over to Mono Hot Springs 6.5 miles away, WHO KNOWS. I forget about the mosquitos for a second and chase the possibilities into dreams.