I awake to three mosquitoes still hanging out on the mesh of my tent. Apparently, it didn’t get cold enough to drive them away. Which means more are waiting outside for me. Ugh. I aim for a 7am walkout time, and, despite the vampiric distractions, manage to get my stuff together in time.

Yoda stops by while I’m finishing up – that was indeed her in the previous site – and I apologize to her for skipping out on her. She’s not worried about it, hauling on to VVR, where I’ll meet her this afternoon.

The first stream crossing is both closer than I thought and hoLY SHIT COLDER THAN I THOUGHT. I’m in up to my calves and everything south of them is on fire, angry freezing fire that makes it hard to think. And then there’s another crossing up to my calves, directly after the first one, and I’m holding back tears of pain as I limp feeling back into my feet. Luckily, I’m able to dodge most of the other streams through various problem-solving and acrobatic skills1, so the pain eventually subsides.

And then it’s up again, switchbacks that seem harder than they should be – probably because I’ve sworn off podcasts this morning in an effort to be more centered, more present. They’re nice and all, but I don’t want to get hooked on them for hiking, even if I am feeling a bit technologically deprived. 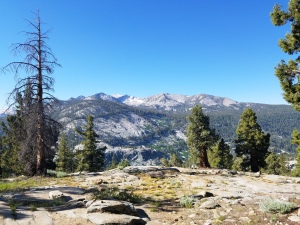 I pass a gent on the last of the ups, and he catches me at the first trail junction for Vermillion Valley Resort. One look at the elevation profile of the Bear Ridge Trail, and I know I’m not climbing back up it. So it’s running after the gent, passing him again, and falling into easy conversation.

I lose him about halfway down – so much down! How do Southbound JMTers do so much up? – and I’m alone with my thoughts, which are mostly of what I’m going to eat when I get to VVR and being impatient that I’m not there already.

But soon enough, the bridge over Mono Creek, and the trail junction for the ferry. 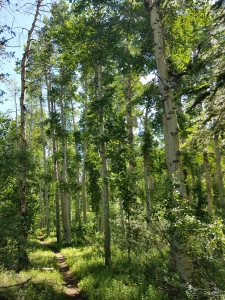 It’s a nice walk to the ferrying place, equal amounts up and down; I arrive at the ferry location at 11, a francophone couple behind me, Jeff and his friend behind them. The ferry apparently leaves at 9:45, and then again at 4:45. Whoops. But it’s a beautiful day by a beautiful lake, and I don’t mind enjoying myself til then.

Jeff’s friend, who I dub Honey Badger, takes a liking to me, and I to her, so we spend the afternoon in conversation, alternating between sun and shade, feet in and feet out of the lake, close to and far from the actual pickup point. As time goes on, more and more JMT and dayhikers arrive, and start basically saying they’re going to cut us, since we’re stupid enough to not be sitting in the alpine sun for five hours not be in line already, but fuck that. First come, first serve, and I make it known as we approach the amalgamation of people that we’ve been there forever. One of the other dayhikers backs me up, and I’m assured a place on the first boat.

Or I would be, if these two people hadn’t cut at the last second. Dicks. No one wants to make a scene in front of the boatman, so we let it slide; I’m about to stay behind since only 6 can go at a time when Jeff offers to stay. I take the opportunity, offer him a beer in return. 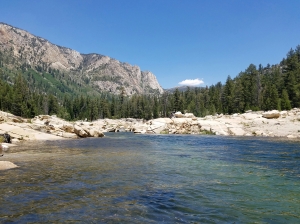 Boat boat boat! Skipping across the waves through the sunshine, grinning like a fool, watching the trees whip by. I look at the landscape and am glad I didn’t walk, am glad I hung around – not only for the company, but for the hills I would’ve had to climb otherwise. It’s all nicer from the boat. 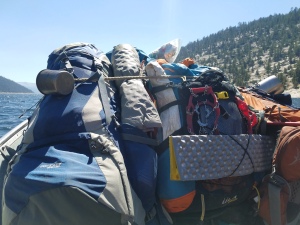 Soon enough, I’m back on dry land and amidst a million other hikers. It’s almost overwhelming, but everyone’s just so animated and excited and and and. I set up, find Yoda and the newly-arrived Outro, and take a gander at the mostly empty store – I’m glad I stopped by MTR yesterday.

I spend the evening floating around, spend a lot of time with Roadrunner and Hammer and Shaka. We all eat absurdly expensive/delicious hamburgers and have a few beers and chat with the locals when they come out to play. One local-ish, Rob, who’s been guiding in the Sierra for a number of years, tells me all about Mono Hot Springs and a lake that I shouldn’t miss later in the Sierra – after hearing about the hot springs first from Spesh, and then from him, I’m planning on heading there tomorrow.

People are still singing around a fire in the darkness when my exhaustion gets the better of me; my earplugs are my besties, dulling me to the outside world as the muted carousing lulls me to sleep.

[1] “Oh hey, there’s a crossing. Oh hey, it looks like a bunch of people have gone this way. Oh hey, this leads to a log [of varying degrees of sketchiness]. Oh hey, I’mma walk across it [with varying but mostly high degrees of success].”