Everyone’s already packed up by the time I roll out of bed this morning – I think about packing, but Pineapple tells me she had a dream about me, namely that my box didn’t come. Great. I stare balefully at my tent, decide not to pack yet – I’ll have to figure out how to pack everything differently once I get the bear can anyway.

I head out to the front of the store for breakfast with everyone – the restaurant’s closed, so we’re on our own for the morning. Everyone’s cooking – I think about going back to get the last poptart package I’ve got, but I want to soak in the love of my friends. It might be the last time I see them.

They try to speculate how far I’ll get today, since they’re looking to do 14. My best guess is 10 – it’s kind of a number pulled out of my ass and kind of a best case scenario; if the package gets here at noon, I can probably be gone by 2, 2:30, and 10 miles would be totally doable. If the package is already here and they just missed it, then so much the better; I can get in at 9 and start the process from there. We’ll just have to see how it goes.

Then it’s goodbye, one by one, in the order in which they are accustomed: Outro first, then Wolf disappears, then Yoda then Evan then Homegrown and Sprinkles. U-Turn isn’t in any rush – he’s leisurely about his mornings – where Pineapple is trying to figure out whether or not to go, given the state of her stomach.

I dart into the store as soon as it opens, put my name on the box list again to no avail. I sneak back there, ask if I can have a look – but while Toggle and Still Alive had luck with this method, I’m SOL. Nothing there. Ugh.

I bother the hell out of the store staff, asking every hour whether or not the mail has been delivered; Toggle gives me some mac and cheese that U-Turn gave her and a stove on which to cook it; it’s full of dehydrated green chilies and dehydrated cheese and omfg it’s so good. I don’t initially think I’m going to finish it, but I inhale it without a second thought.

Pineapple is judging me for not having taken a shower since we’ve been here – I don’t quite see the point, given that I’m just going to sweat through all my clothing in this heat wave, whether or not I end up hiking out. Still, I give into peer pressure, and while it’s nice, I don’t feel amazing afterwards. I’m that anxious to be gone, apparently.

When I get done with my shower, she’s gone, and U-Turn’s ordered a burger – the last order of business for him before he leaves. He eats with relish, and I watch and envy his ability to just pick up and go after.

And then no more Wolfpack. Just a lone wolf, unsure she’ll catch up as time keeps ticking by.

I’m in the store every hour, making sure I haven’t missed the mail coming. The Health Inspector comes, supposedly after having been called – I mean, I guess it’s valid, what with all the people getting sick, but that’s a dick move if it was a hiker who did it. I’m talking with Moses and Zane and Blackout and MAGA – Moses tries to force a conversation between me and the last, for funsies, I imagine, but neither MAGA nor I have the energy. It’ll be interesting if it happens, though.

And then, the mail! And then, praises be, my bear can!

I abscond back to my tent with the goods, and find Spesh has not only packed the bear can so there’s still room in it, he’s gotten me some goodies I wasn’t expecting, in the form of jerky, tiny salami. Everything I expect to be in there is inside – microspikes, new socks, food – except dinners. There’s a Mountain House lasagna, some Textured Vegetable Protein, and some Spanish Rice. That’s it.

I’m on struggle street when it comes to repacking the bear can so all the food fits – how the hell did Spesh do this; I took stuff out for chrisesakes! – but eventually I manage. Mostly.

Then I put the bear can in first and kinda squish everything else in around it. It works – well enough, at least – and then it’s a rush to mail stuff home and close my tab and and and.

I’m grabbing some supplementary snickers, bagels, and chips from the store when Molasses walks in! I didn’t know she was still at Tom’s place, but I should’ve known to check. Damn. It’s too hot at Tom’s, so she came to the store for ice and ice cream and also to sit in the AC of the truck for a second. We catch up quickly; I’d come hang out if I weren’t trying to catch my friends. She gives me a ride to the trailhead to increase my odds, and I’m back on trail at 4:30.

It has zero business being this damn hot at this damn hour. It’s supposed to be cooling off, but I’ll be damned if it doesn’t feel like it’s heating up. How, I don’t know, but at least there are trees soon.

And then, Kennedy Meadows Campground! And the South Sierra Wilderness!

…And two guys sitting there?

…And two more guys with a camera. Ah.

This is the Korean TV show that’s being filmed. The first two guys are the subject. Okay. Well, I have to pee, sooooo I hope they stay well back there.

I get to the water source, and they’re there. Okay, whatever. The dudes are in the river, camera folk blocking the easiest collection point. Okay. I walk to the other side of the bridge, prep my Aqua Mira. The dudes are now bathing upstream of both convenient collection points. Srsly? I manage to find another one, but I’m pretty sure I’m in a shot, maybe messing it up. I don’t even care anymore. 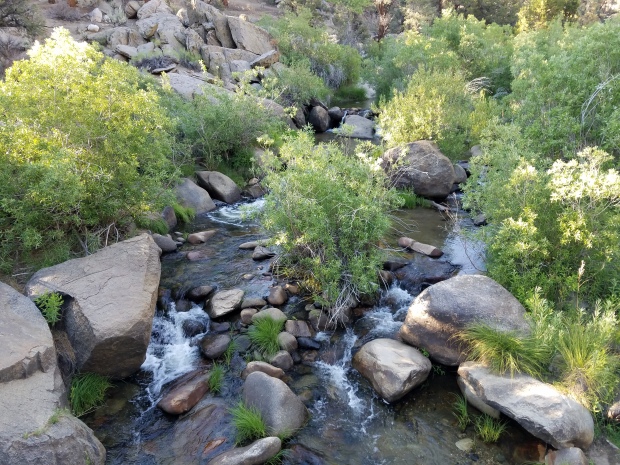 Then it’s up uppity up, as the sun slips behind the mountains.

I think about going to 10, but that’s more up, so I stop at 7 miles and 7:30, set up, put my bear can out, even if there’s still food on the outside. Two more days to eat it before Cottonwood Pass, no worries.

As I’m finishing up, the hikers and film crew pull into the site I’m in. Asdfghjkl. They film mundane things like the hikers cooking and setting up, before it gets dark and they set up by white-light headlamp1 and party until 11pm. Eventually, I wise up and put my earplugs in, which at least deadens the noise. I swear I’ll be up early to have my vengeance by tearing down loudly in the morning get the hell out of their path tomorrow before I sleep.

Start: 702.2 • End: 709.5 • Day: 7.3
Notable Accomplishments: Bear can to trail in two hours • Managed to screw myself over from the past • Seem to have managed to escape Kennedy Meadows without getting sick? Maybe?

[1] The white light is annoying after dark, because it gets everywhere – it bleeds through tents and ruins night vision and makes it hard to sleep with its flashing. Most folks are more than capable of setting up by red light.