I wake early today, go back to sleep annoyed – why get up when there’s no walking to be done? But I can’t stay asleep for long with the sun shining merrily down on my tent, and I flee the bright for the relative chill of the outside world.

Turns out, Pineapple and Homegrown are ill – they’ve both been doing a lot of throwing up, which sucks. It’s not the water here, like Wolf was afraid of, or at least, this incidence isn’t related – waterborne illnesses take a lot longer to set in – but we’re not sure what it is, and everyone gets paranoid that they’re next. That does mean, though, that more of the group is zeroing today. I’ll have a much better chance of catching up if a bunch of people are behind.

It’s off to GrumpyBear’s for food and WiFi – or food, anyway, $10 for bacon eggs potatoes, and all you can eat pancakes bigger than your skull. The WiFi bit is a bit of an overstatement, but I manage to do a favor for a friend, even if I can get literally nothing done for myself. Oh well.

There’s a bit of fun on the way back in the form of avoiding Fish and Wildlife officials, and then it’s a zero’s worth of conversation and writing. I abstain from another burger, but eat another pint of ice cream. Eventually Homegrown and Pineapple emerge from their tent cocoons, not-quite-new-made hiker butterflies. Still, it seems the worst is over.

Blackout, whose package went to Kennedy Meadows North, engages me in another fun round of political conversation, which I enjoy maybe a little too much. More and more people roll in, and I start to feel the itch in my own feet.

I watch the Wolfpack pack their packs, feel the weight, the awkward way a bear can presses into your spine. I’m excited-not-excited for tomorrow, when mine comes – if mine comes – no, when mine comes. Positive thoughts. I’ll have to do all this on the double if I want to catch them.

When I head back to the store’s porch, someone’s put the last game of the NBA finals on. Normally, I don’t care about basketball – and I still don’t, at least not through the first two quarters – but the last two are good, really good, and I sit with a fellow Ohioan to cheer the Cavs on to victory. In the middle of it, I find I’m quite done with Kennedy Meadows – it was awesome to get here, awesome to get to rest, but I’m ready, mentally ready like I haven’t been in a week, to move on down the trail. It’s a reassuring feeling, even if I’m gonna be forced to stay another half-day at least.

Right beside me, a gentleman has overheard that I hiked the Colorado Trail last year. He said he thought he recognized me; it’s Tim, who I sheltered with during/after that crazy windstorm a couple days into my CT thruhike!He’s impressed I remembered his name, but he and his son did me a good turn that night, and it meant a lot. Small world. Smaller hiking world. So cool to see him here!

And then the sunset is telling me it’s bedtime, so I wander back to camp, where folks are talking about tomorrow. Most are leaving in the morning, but Pineapple is still feeling pretty terrible, so she’s thinking she’ll leave in the afternoon with me. The group wants to make 14 miles – I think that’s pushing it for me, since the mail is delivered between 12 and 2, and I have to wait for it then go through it to make sure I have enough to get to Kearsarge Pass and Bishop then send home the stuff I don’t need and close my tab and Pineapple is sick and and and. But I promise to try. 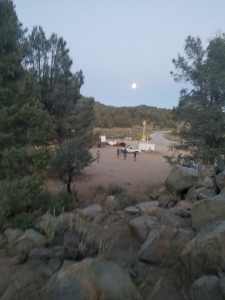 And then people drift off to their evenings – mostly to bed, but some off for a last hurrah. I’m one of the former, even though I hear the wild noises from the store and feel bad. I feel like I’m missing out on… something, but I don’t have the energy for people. It’s warm tonight, so my sleeping bag’s just curled around me, my faithful companion on the road to sleepytown. I’m trying to find a good name for it, but I find unconsciousness instead.