My whole night is spent being paranoid that I’m going to roll over on top of Pineapple. I’m surprised that there’s as much room as there is in this Mountain Hardware Ghost UL 2 tent, but I put myself on the slope, and I’m afraid I’m going to crush her with my tall frame in the night. We manage to make it through though – and then some. When the alarm goes off, Pineapple doesn’t move. I take that as my cue to sleep in, although when 5:40 rolls around, both of us are ready to start the day.

It never really got cool last night – putting a long-sleeved shirt on after sleeping in my sportsbra seems like a travesty, but if I fall on the lava rock that’s everywhere right now, I’d much rather have a layer between the rocks and my porous, delicate skin. It’s like playing Tetris trying to get out this morning – there’s a lot of shifting things around to make sure they fit into nice neat rows, pack down into our packs just right1. Still, we manage to hit the trail by 6:40.

Then it’s fun with igneous rock and Mount McLoughlin and the morning light: 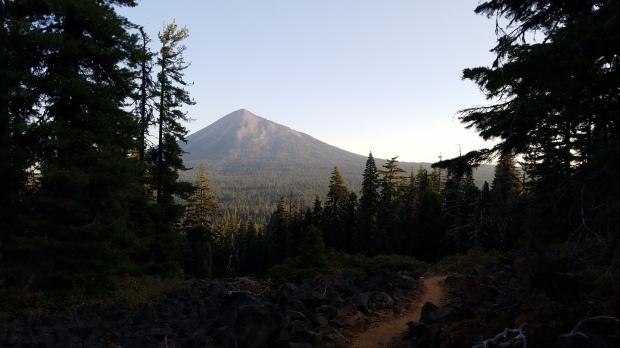 I’ve been kept blissfully ignorant, for the most part, of how many spiders there are on trail until this morning – apparently, spiders like rocky trail, and like to build webs across it, and before I know it, I’m wearing full-length leggings made entirely of spider webbing. Using my trekking poles to quest ahead and try to remove them before I walk through them is only marginally successful, and while I don’t freak out, I do get the heebie-jeebies every time I walk through them. Still, they force me to look down a lot, to take note of the trail that’s been built and maintained here with care.

I’m nearing Highway 140 when I look up and see a furry brown face staring at me from on top of a log. It looks like a cross between a ferret and a kitten, and my brain screeches the words “PINE MARTEN,” “PANTALAIMON,” and “LYRA BELAQUA” at me. Slowly, ever so slowly, I move towards my phone for a picture, but as most rarely-spotted animals are wont to do, it scampers off once I’m ready to snap the photo. Damn.

I’ve always wanted to take a picture like this. It was more anxiety-inducing than I expected.

It’s not even a quarter-mile to a footbridge over a creek, where Pineapple catches me, and we sit and have a break probably too early in the day. Still, we rinse our socks, have breakfast, chill out for a bit.

Then it’s up up up we go. The grade’s not bad, but it feels… long. I didn’t quite know before hiking that not being able to see the forest for the trees is a quite literal saying. Walking in the woods is pretty, but monotonous. It’s hard to tell if you’re getting anywhere, even though you know you’re putting trail behind you. Seeing all the dayhikers makes me feel better, though – they’re clean, so clean, and they stand out. They’re my mile markers today, and apparently it’s a weekend, because there are many of them.

Pineapple catches me at Christi’s Spring – it’s barely flowing, so there are no mosquitos like I’ve come to expect, but there are wood chips in the water. Gotta get that fiber. Two southbounders are there, too, and they talk about the blowdowns that are just ahead. Miles and miles of blowdowns, all within a 15-mile water carry. Ugh. And I’ll be camping before the next source, which means I need to carry a stupid amount of water for the blowdowns. Double-ugh. But there’s nothing for it but to move it on along, and hope that the old “take SoBos with a grain of salt” adage is true in this case.

It is not true in this case.

Every 50 to 100 feet, a new puzzle awaits: do I go around? If not, where’s the best place to climb over? In any case, where the hell’s the trail?

Eventually, I just learn to trust the tiny side trails that those that’ve come before me have worn down. It’s not exactly Leave No Trace friendly, but it does help to avoid injury.

The whole thing is particularly hurtful because the land’s mostly flat through here. I could be rolling. Instead, I’m spending hours and hours trying to navigate the puzzletrail. I laugh so hard at the situation I almost cry.

Finally, FINALLY, it’s up a hill and mostly free of the blowdowns.

At this point, though, I don’t know how many more miles I have left in me. I’m moving slow, and everything that is normally sore is doubly sore. Blowdowns really take it out of you.

I run into more southbounders – Matt and Happy Feet – and we talk campsites ahead and Crater Lake and such. Pineapple passes us while we’re talking, and I can see she’s about as over the blowdowns as I am. There’s one last solid campsite before we’re SOL for the evening, the gents tell me, and I thank them before heading out on my way.

At said campsite, there’s no Pineapple, so I keep walking, too. I’m vaguely concerned that there won’t be any sites for miles after this one – and the sun’s going down – but I don’t want to abandon her.

My concern seems more and more valid as I enter a burn area, and continue through a burn area all the way to the Snow Lakes junction, where Pineapple is talking about needing to trudge down the ridge to get water. It being a ridge, and it also being full of burned trees, I’m concerned that if we camp here, we’re going to get crushed in the night, what with the wind – just a breeze now – that is common to ridges. So when she goes for water, I leave my pack to go see if there are safer sites a little further on.

I run into Broken Toe and Needmore about a tenth of a mile into my hunt; they’re SoBos who say there’s a site just about a mile ahead, just out of the burn. Pineapple comes upon us, mean-mugging me, and when I tell her about the site ahead she’s not happy, but also not willing to become a pancake in the night. I run back for my things, catch her just as she finds the place, about a tenth of a mile from where the SoBos said a mile more. Take SoBos with a grain of salt, I guess.

It’s not a great site, but it’s passable, and there should be no squishage in the night. I set up, cook, eat – this is getting easier, I guess. At least dinner’s not so watery tonight. I roll into bed, looking forward to an early morning and Crater Lake National Park tomorrow night. 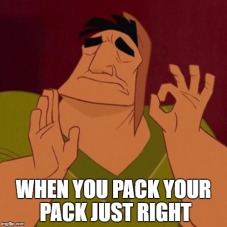