I struggle to stay warm all night, even with my leggings on, even with my wool Buff as a hat and my normal Buff as a scarf and my sleep shirt on. I probably need to wash my sleeping bag soon, I think, as I’m up for far too long in the middle of the night. When my alarm finally goes off at 4:45, it’s hateful to me, and I hit the snooze button and reset things until 6, when I finally rouse myself. I’m not looking forward to more mornings like this.

Pineapple has roused herself early for me, heads out at 6:30. So impatient, but I get it. The urge to walk is strong with this one, and also I’m running late. So she heads out while I’m packing up, has to come back when she realizes she’s forgotten her socks drying on a tree. So she’s only actually 10-15 minutes ahead of me by the time I get myself together and set out.

But oh, what a difference those 10-15 minutes make.

One of the first things I do is dodge a runner, and then another, and then a dayhiker, none of whom seem to know or care about yielding to the uphill hiker. Combine that with a sharper climb than we’ve had in a while, and I’m already on struggle street.

Even the nice down and the podcast I’m listening to1 don’t seem to help, particularly since I only seem to have to dodge people while I’m headed uphill, once that happens again. I lose so, so much momentum and so, so much time. 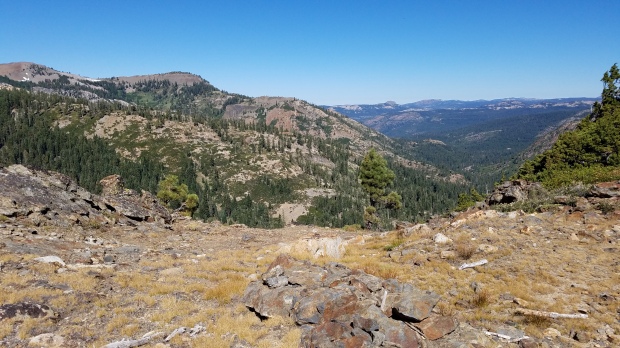 I finally tap out for lunch, sit and consume calories like it’s my job, which, it kind of is. Many dogs and humans go by, drink the water, pee nearby. The dogs, not the humans. I’m glad I’ve already grabbed what I need for the next stretch – supposedly 12 miles without water, although there’s been lots of bonus water. Then it’s off again, and up – the last climb before the down.

I want to throw something by the time I reach Tinker’s Knob – I’ve figured out it’s Saturday, and also Let Your Dog Off Leash day, which often forces me to yield to the dog even if I don’t want to yield to its humans. But at least the ridgewalk is pretty.

Over and rolling along the ridge, down then up to where Pineapple is collecting from some snowmelt. How has it only been 15 miles? How has this day been so hard, and so long? And we’re still 2.5 miles from Donner Pass, and 10 miles from where we’re wanting to sleep tonight. Woof. Supposedly, though, there’s free pie and beer at Donner Ski Ranch for hikers near the pass, so there’s at least incentive to move.

We make it down to Donner Pass trailhead, where there’s a portapotty and I don’t have to dig a cathole. Then, the highway, where we scooch the quarter of a mile west to the Ski Ranch. 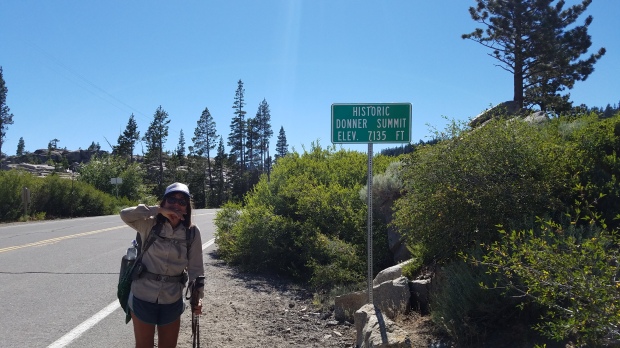 There isn’t free pie, but there’s free beer – the bartender hands Pineapple and I an Anchor Saison and a Bud Light, and I take one for the team. Meer and Six are there too, enjoying a beverage and getting rehydrated simultaneously. I eat a basket of fries and, after some prodding, so does Pineapple. Soon enough, we can tarry no longer, and we make our way back to the trail.

The trail skirts the highway for quite some time, kisses a trailhead parking lot where there are cars and bathrooms, but that I try to ignore. Gotta walk. I get stopped soon enough by a dayhiker, who asks if I’m a thru; when I answer in the affirmative, she asks me if I want a beer. The If Then Yes rule comes into play, and I walk off with recompense for my earlier sacrifice.

Pineapple catches me on the last up, and we decide, collectively, to stop at the nearby hut, one of the few shelters on the PCT. Folk are pretty happy about it on Guthook, and it seems to be open, so why not stay a while?

The Peter Grubb Hut, when we arrive, is pretty awesome, with solar lights and a loft to sleep in. Meer and Six pull in while we’re exploring the grounds, trying to decide if we’re better off in the dusty and potentially mousy loft or outside, in the chill. Meer opts outside and heads to sleep pretty quickly; she’s out before I come back from grabbing water from the trickle in the nearby field. Pineapple and I set up upstairs, where Jazzus joins us, but then head downstairs for social hour with Six and a weekender, who was aiming for the hut. The electricity makes us more awake this close to dark than we’re used to, and we chat until it’s well past hiker midnight. We hang our food in baskets dangling from the ceiling and leave Six and a lovely lovely section hiker to sleep on the tables, hopefully away from the mice. I hope my tyvek barrier will protect me from the dust and any potential hantavirus therein as I curl up in my sleeping bag and sleep.

[1] It’s Myths and Legends, which I’m back and forth about. He protests that he respects these myths and legends, and to some extent I enjoy his snark, but I think he takes it too far in expecting the stories to be realistic in basically every episode. It’s called Myths and Legends, ffs. Still, it’s cool to hear about the Norse pantheon while walking under a ski lift.