I feel not at all rested in the morning, still kind of drained by the previous evening. I loiter in the hostel until it’s time to scoot, and then Outro and I get invited over to the condo the others are staying at.

I head over, but find it hard to eat the burrito they hand me, or be invested in watching Gangs of New York on TV. It’s just as well they have to check out soon and everyone’s starting to move – I excuse myself and get on the bus to go back to the trail.

It’s two buses this morning, and a line for the second one – I’m the only thruhiker in sight, and it’s nice to be anonymous-ish. I chat with the people in line with me, feeling better the farther I get from town.

Finally, I make it back to Red’s, back to the trail – if only for a moment, anyway. Devil’s Postpile National Monument is barely off trail just a little ways up, and I veer off to go check out the geological anomaly.

It’s a little more down than I expect, but worth it – so rad what nature can do! Also, what humans have wrought – I’m hungry and have service here, so I download Pokémon Go and catch a Bulbasaur while having a snack. I feel kind of bad about it, thinking WWJMD1, but that guy had neither internet nor pocket monster-related nostalgia, sooo I give myself a bit of a pass.

But there’s not a lot there, so I tear myself away, head back to the trail, and pretty quickly find myself where the JMT and the PCT split for about 14 miles.

I’ve been debating which route to take for the past couple days. Sure, the PCT goes higher up but is flat, giving one arguably better views and a nice walking experience, but the JMT takes you right by some nice lakes – something we’re going to get fewer and fewer of as time goes by. I stand at the crossing anxiously, as it feels like the biggest decision I’ve made in a long time and I’m alone and pretty indecisive generally – wat do wat do wat do? Maybe JMT? Probably?

I’m making a way bigger deal of this than I should, which is what Spesh tells me when I call him. Since they’re basically the same distance – 14.1 on the JMT versus 13.9 on the PCT – and basically the same amount of gain and loss, and the JMT is considered an acceptable alternate, why the hell not. Might as well get a two-for-one on long distance trails while I’m out here. Also, there are lakes. For sticking your feet in. For getting cozy with. Yes. Why was this so hard?

It’s initially a lot more climbing and a lot fewer lakes than I think it will be, dodging JMT hikers and crossing creeks over wooden bridges, feeling less loved as a PCT hiker who wouldn’t normally be able to keep her feet dry. It’s a little confusing too, as a couple of side trails – maybe to campsites? – aren’t particularly well-marked, so it’s a lot of trying to hope the GPS on Guthook is accurate and finally deciding to go by Halfmile’s topo. I’m a little more successful in this, finally making my way to a point where there are no side trails, only the JMT. 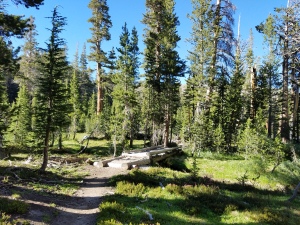 Yeeeep. A bridge. Over that. 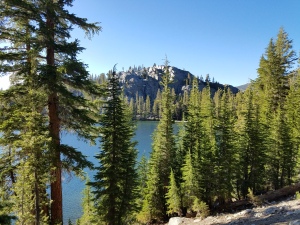 There are tons of folks camped out here, most of whom ID me as a PCT hiker, even though I’m not trying to broadcast the fact2. 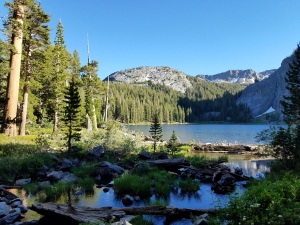 I grab some water and move on – I’m trying to make Shadow Lake tonight, which’ll get me a little over halfway through the detour. I’m trying to reach Tuolumne Meadows two days from now – Sprinkles’s family will be coming to do trail magic, and as they own a Mexican restaurant, I’m told the food will be superb.

It’s a gentle climb out of Rosalie and a “fun” forever descent down to Shadow, with all of the switchbacks between me and sleepytime. I consider camping lakeside, but decide to go to the outlet for better water access.

At the outlet, which actually seems to be more of an inlet, there are a ton of dead trees – and a no camping sign. Really. Ugh. I hunt around for a passable spot anyway, set up, feel bad, and tear down, head off further up trail to try to find something.

There’s nothing after the short climb but the trail moving on further upwards and a faint trail leading up the hill between me and the lake. Following the faint trail leads me to a great, if terribly windy, flat spot overlooking the lake. I might not be supposed to camp here either, but there are no signs, it’s getting dark, and I’m far enough away from the water to be comfortable LNT-wise. So I throw up my tent, throw some dinner down my gullet, and realize, in settling in, that it’s my first night alone in quite some time.

Despite my usual trepidation about such things, I feel safe up here in my perch, happy to be on my JMT side quest for the time being. I’m in a rush to make the lakes of tomorrow come sooner as I fall asleep.

[1] What Would John Muir Do

[2] Definitely was digging the secret agent vibe, but apparently I’m not so good at the secret part. Guess that’s what you get as a northbounder amongst a lot of southbound JMT hikers.