I’m feeling well rested, but still rolling over to go back to sleep when I catch a glimpse of the time: 5:06. Damn. I meant to be up well before now, since apparently I can’t get my shit together of a morning unless it takes a million years. But I go at it doubletime, and it all comes together by 6:11. Not bad after two hours yesterday.

It’s about 5 miles to Mather Pass, most of them chill – at least, right up to the pass itself. Yoda’s out first, then I’m not far behind her. Not that I’m looking to catch her at all, it’s just that the others are bound to catch me. Might as well get a headstart.

We play a game of stream crossings for a while. I’ll get to one, figure a way across, then Outro will show up and I’ll show her the way. I’ll strike out ahead again; she’ll stay and tell Sprinkles and Homegrown about it, then come and catch me again. It feels like a productive morning, but it also feels like Outro is chafing at the bit.

One of my times ahead, I run across a deer that scooches just off-trail so I can pass, then follows me down the trail for 90 seconds. I am vaguely concerned I have turned into a giant salt lick, but eventually it leaves off.

We come to a crossing where Snooze Button is packing up, ask him to point the way, and Outro’s gone. Damn, I admire that. I wish I had that in me somewhere, but all I can manage is my own plodding pace. It does give me time to take in the scenery, though.

Mather is hiding in plain sight; at first, it doesn’t seem like there’s any way up it, but looking a little closer tells a different story. 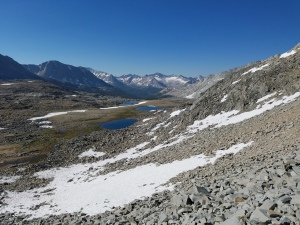 The switchbacks, when I reach them, are brutal, but that’s the price I pay for such a relaxed morning. I beat my own spread, make it to the top just before 9am.

Yoda’s gone by the time I arrive; Outro gets more and more antsy until she goes, too. Not many breaks for them. I decide to wait for Homegrown and Sprinkles, and right around 10, here they come – or Homegrown, anyway. Sprinkles isn’t feeling well, and he drops pack and runs back down the slope to grab hers. Up she comes, stepping gingerly, most of her weight on her trekking poles. Uh-oh. I pass along some ginger chews, and they shoo me onwards – though I feel a bit bad for leaving. 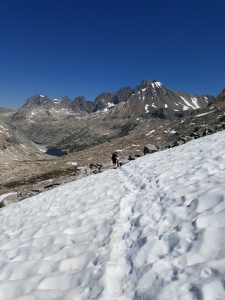 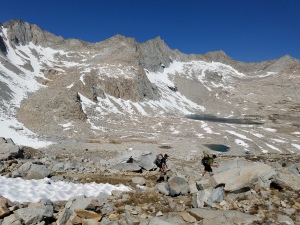 The north side of the pass is still a bit of an ice cube, but I see Cowboy, 360, and Snooze Button glissading and I think I can do it, too. It’s too early – so it’s sketchy as hell – but I do it, even if it leaves gaping holes in my ass new, wonderfully warm Montbell leggings. Le sigh. At least the holes are under my Mountain Hardwear skirt, and at least the skirt itself isn’t yet showing all my tender bits1. 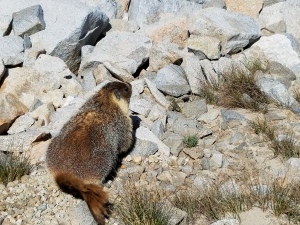 Down the pass, it gets gorgeous, showing off alpine lakes and clear, clear water in style. I’m jamming out to Once On This Island, enjoying the story like never before, though I’ll admit it’s a bit different in an alpine setting. Not bad. Just different.

I get to the bottom and sit with the boys – Cowboy, Lapsang, Woodsmoke, 360, and Snooze Button. They’ve just been swimming, and while I’m uninterested I sit to eat with them. It’s strange – I only think I’ve been outnumbered by dudes a handful of times on this trip, and I can definitely tell they’re doing dudetalk. Not that it’s unwelcoming, just different. I chime in occasionally, but mostly I’m just happy to prep my rice and beans, go stick my feet in the crystalline lake. I still have 12.5 miles to go, though, so I shoo myself out and down. 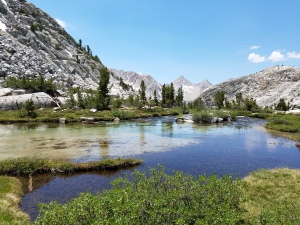 Outro is just a bit further along the trail, and we catch up for a moment before she’s off again. I think she had the better spot – there are fish dancing below the surface of her shallow water, I could’ve gone wading with them! But I’ve chosen, and now it’s time to make miles. 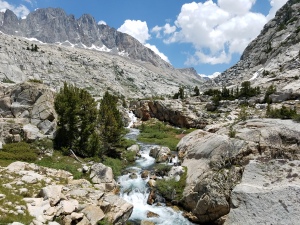 Down, down by a raging river that’s always in earshot but hidden from sight. A million switchbacks; goodness gracious me, the JMTers have to climb this?! I can’t even imagine – can’t, because my brain is forbidding it; I’m nearly in pain going down as it is. Stupid knees with your stupid tendons and the stupid steps on the trail.

Down, down, past an amazingly enthusiastic old man who’s sO EXCITED I’m doing the PCT. He’s brown – Japanese, Outro tells me later – and his enthusiasm for being outside and that I’m outside is contagious. He asks a lot of questions, and I give a lot of answers. The interaction leaves me stoked about finishing this hill.

Closer, ever closer to the trees, and now I can see the roaring water that’s crashing down the hill.

Pine trees and blowdowns and maybe there was a fire here? And ferns, straight out of Jurassic Park, which I’m now humming again, pretending Speshul is going to pop out of the woods doing his best velociraptor impression.

I stop to wreck my rice and beans, and after I do I run into a guy who swears he gave me a ride up to Onion Valley. I got a ride up from Donna Saufley, and a ride down from Michael, who this is most certainly not, sooooo maybe he’s thinking of Hammer or Roadrunner? But I’m on autopilot, and not swift enough to correct him, but it bothers me for another half mile.

I turn on Code Switch, the new NPR podcast that’s supposedly right up my alley, and it is! I’m squeeing over the first episode 2 so much that I roll into the second and the third, hardly notice the miles going by. The scenery is great, though.

When I get through the third and last one I have, I’m forced to switch to Wait Wait, Don’t Tell Me, which is fine but less fun than Code Switch for me. One last hill and I roll into camp, with quite a few folks already seated and eating.

I grouch about JMT hikers almost immediately – taking up the nice shade spots, leaving two quarter-bottles of Heet on a fencepost with no note or anything and making me feel obligated to pack it out – but also I’m super impressed with the climb a lot of them did today. So impressed.

I’m also kind of impressed I smoked the boys – I didn’t think I was moving that fast, but slow and steady wins the race, I guess. They roll in and we chat about football, Britain’s EU Referendum, and many other things before the alpenglow gives us a light show and the mosquitoes start coming in clouds and it’s bedtime.

It’s cold outside, but writing in my sleeping bag warms it up, and snuggling in feels so nice. I might even be ready for another pass, another 18 mile day tomorrow. At least, I hope.

[1] The skirt is holding up remarkably well for 800+ miles on a clumsy oaf like me. It is entirely too big for me now, though.

[2] I’m definitely interested in seeing where the series goes, so if you’re not already listening to Code Switch, and you like this blog and its sometimes topics, I’d check it out.