I’m up at 3:30, take my time about getting packed and I’m still ready to go by 4:05. It’s still super dark, darker than it was when I went to bed, or so it seems, but that’s the fun of pre-dawn “light”, or so I’m told. It’s always darkest before the dawn, or whatnot.

So I shake it up and I’m off, winding my way down past other folks packing up camp and then up, an up I did not want to do in the heat, in the imperceptibly growing light. 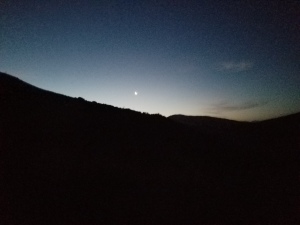 I’m a little worried about mountain lions when I stop to shed layers because of the already-hot breeze; it’s almost light enough to see by, but also too dark to navigate the uneven terrain without a headlamp. Prime kitty time. But I don’t have any problems as the sun makes its way over the horizon.

Quickly now, with feeling, up this up before everything gets sweltering and you feel like you want to lay down and do nothing. Like that person at the end of a switchback, still abed. Cozy. Comfy. Horizontal. Mmmm. NO STAY STRONG. Finish the up. Do eet.

There’s some confusion after my success as to where the trail actually goes – up a hill or around said hill. I check Guthook and it says up, but coming down the hill the signage says around. Oh well. Guess I just took my first alternate1.

Then it’s Bear Spring, the last water til Green Valley Ranger Station, 15-ish miles on. I take 4.5 liters, convince another guy to do the same – it’s supposed to be sweltering today, so I’ll have some extra if anyone needs some extra. Then it’s off and walking.

Down to Bouquet Canyon Road, then up. So much up. I watch the guy I convinced about the water disappear into the distance ahead of me.

It’s 9am, and already the heat is nearly overwhelming.

At 10am, I can’t take it anymore, and when I get to a campsite under some powerlines where a bush is providing a marginal amount of shade, I slide myself into it and sleep. I wake occasionally, to rearrange limbs head torso in the shade.

A woman walks up, joins me in a different shady spot; Stork drinks some of her water and laments setting her pack down on her hydration bladder’s bite valve. She’s got half a liter left for the next ten miles. I agree to give her a half liter at least, but advise her to stay until the heat of the day’s over. We sit and chat until the sun’s overhead and there’s no hiding any longer in our current spots; I nestle under a plant that sheds nearly all its pollen on me, until I’m covered. Ugh. At least it’s shady.

We talk about life and reasons for hiking and we nap on and off until 2, when her still-dwindling water makes her nervous enough to leave. I’m worried about her – and I think I have enough – so I follow suit, start packing. Big Spoon comes by, also has very little water. Well. This should be fun.

It is hot and dry and good goddamn this was a mistake. I remember signage at the Grand Canyon, the ones telling you to stay the hell put if you’re low on water – which is the exact opposite of what we’re doing. This seems crazy, but every time I think to stop I settle into a groove and tell myself just a little further.

Things get familiar again – it’s the Oasis Cache, or it used to be; I helped fill it one time, when Spesh and I came to visit before Kickoff. Gone are the umbrellas, water jugs, lawn chairs, coolers of soda, what with caches generally being frowned upon. MAGA lies in the shade of his tyvek with the ghosts of the cache-that-was, reading. I stop to chat, almost stop to rest, but I’m pretty close to Green Valley, and I know that I am awaited by taco salad, if only I can make it to the Anderson’s. So I continue on.

I’m leapfrogging with Stork, Big Spoon, and Heidi as my water dwindles, dwindles; I’m practically running from shadow to shadow, thinking about how Dungeons & Dragons’ Shadowdancer prestige class would come in reeeeally handy right about now2. The shadows are lengthening, the breeze, when it comes, is a godsend, and we live for those moments. When it stops, or there is no shade, we’re thrown back into the fiery clutches of the unrelenting sun. 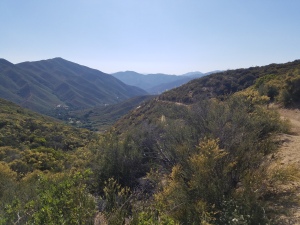 Big Spoon runs out first, then Stork, then Heidi, then, a mile from the road, me. I was the one I should have saved that water for. I pull ahead of the other three in something like desperation. But it’s only a mile, and while I miss the half-mile mark I draw a 0.4 for the others in the sand.

Then, a human, the register, and the road!

I haul the two tenths of a mile, smile at Tim, who’s carting hikers directly to Hikertown and who strikes up a conversation. I’m subtly looking all around for the supposed spigot, and am as polite as I can be for as long as I can be before I ask where it is. He tells me, and tells me to call him for a ride if I need one. I’m thankful to have a Sawyer Mini as I drink greedily, immediately, from my bottle.

I hold out the bottle to the others as they approach, where they, too, drink greedily and then go get more for themselves. I head over to hitch into Green Valley, where slowly, the others join me in my thumbing.

I think my exuberant dancing does the trick, and pretty quickly; Michael is a neighbor of the Andersons, and happy to give us a ride to their driveway, full of hikers in Hawaiian shirts. We thank our ride, and I feel like I’ve come home.

One of the first things we’re made to do is dance for our Class of 2016 bandanas; as Terrie’s passing them out, she scrutinizes me:

“I know you.”
“I’m Speshul’s girl,” I say, knowing she knows him even if she doesn’t remember me from past visits. I’ve only been here twice, for a day each time, and while we’ve hung out at Kickoff she meets thousands and thousands of hikers every year.
“No,” she replies, “you’re Amanda.”
THE FEELS. Also THE HUGS.

And then there’s the group photo and the mandatory Hawaiian shirt donning and no fewer than 2.5 plates of taco salad. Molasses and Jackass, two folks who hiked with Spesh and who I met at Kickoff, are also here, helping out. I’m so talkative and excited for my long-awaited Casa de Luna zero tomorrow that I can hardly sleep, but sleeping will get it here faster, so I’m out like a light.

[1] …That was not a detour or otherwise “mandated”.

[2] Not that I think Bards can take Shadowdancer as a prestige class, but a girl can dream.

(Yes, I’m a Bard. The most useless of all the classes in D&D, but not the worst one for life generally.)