Sasha and I are some of the first ones up; Spaceman, set up near my feet, is gazing blankly up at the sky. Well, it is early, I think. The heat’s going to get rough today – it’s warm out already – so the sooner we get going, the sooner we get to the North Fork Ranger Station, where we’ll take our siesta. 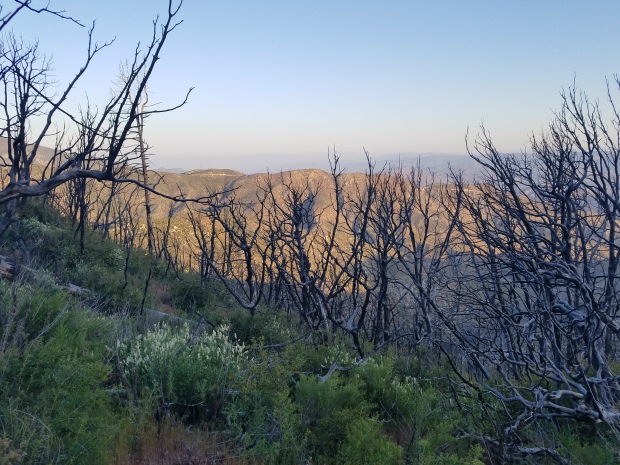 As we go, I take one last glance at the road – last chance to change our minds – and head down the trail, not knowing what we’ll find. It should be fine, though. The Trail Gorillas told us it was fine. 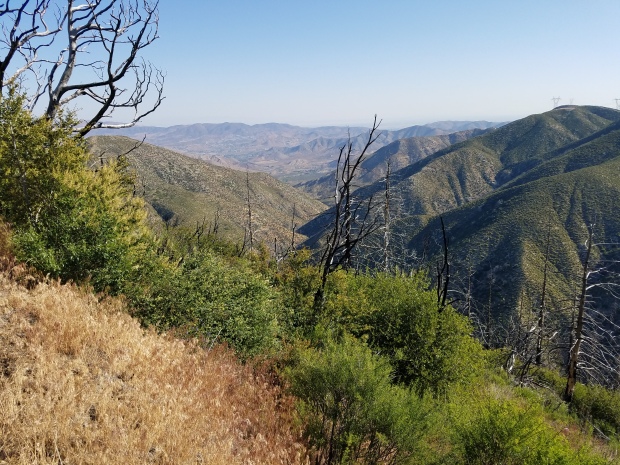 If by “fine” they meant “covered in PDB in many places,” then they were correct.

It’s not all on-trail – in fact, the PDB situation is significantly worse off-trail – but there are plenty of plants to avoid, including baby ninja plants that are just begging to rub up against an ankle. PDB also has a nasty habit of growing inside other plants, and this part of the trail is mostly overgrown, so it’s slow going as I spot check every plant, point out every bit of PDB I see. It’s mentally exhausting, and physically sometimes requires some gymnastics – at one point, I take my pack off and basically limbo under two plants, one on each side of the trail, that want a piece of me. 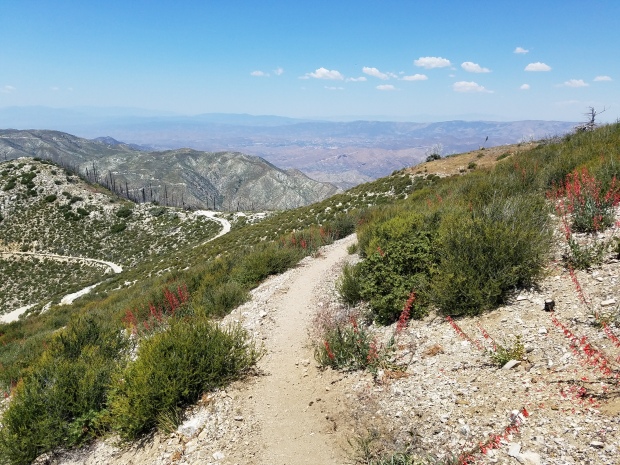 Sometimes it was clear, though.

I stop for an urgent poo break in the middle, and find we’re about 50 feet away from the road. One last chance to bail on this section – do we take it? 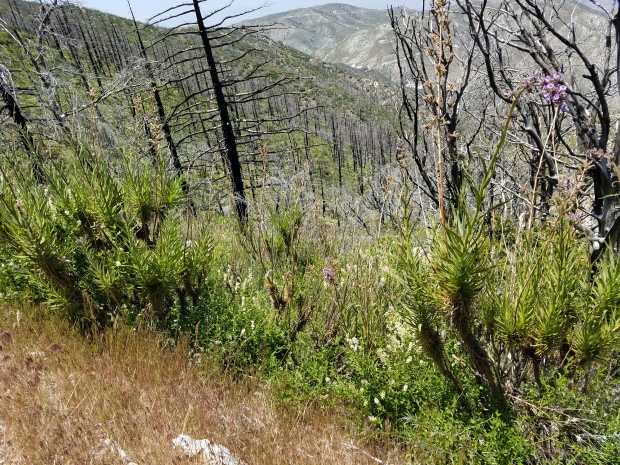 We, of course, basically crawl out of the detour, and into an extra long break near the Messenger Flats Campground. Then it’s down, down, down towards the North Fork Ranger Station.

Sasha belatedly tells me there’s supposed to be cold sodas and frozen snickers bars for sale at the Station. WITHHOLDING INFORMATION. NOT COOL. It’s a bit more motivation as the sun gets hotter and the trail takes us over talus and– wait is that poison oak? Seriously?

All I can do is laugh about it, though – and start lyric-swapping to make a more appropriate version of My “Favorite” Things1 to make the walk go by a little faster.

Sasha checks the GPS distance – still another 0.8 left to go, and we’re dragging. Morale is low. And then from around the corner, Spaceman comes running down the trail, blasting Pour Some Sugar On Me – his shuffle fortuitously started playing it when he first saw us. When we stop cackling, he’s in front of us, and we run to catch up with him and hear the chorus, yell “POUR SOME CHEETOS ON MEEEE” at the top of our lungs. It makes the distance go by, and then, the Ranger Station!

Sasha wasn’t fooling around – there’s ice, actual frozen water, in the cooler, and while I don’t splurge for a snickers they’re there, too. We lounge away the hottest part of the day in the shade with cool drinks – it’d seem like a normal summer afternoon, except we’re covered in grime and laying about in the yard of a ranger station like turtles who’ve shed their packable shells. We move about that fast, too, when pressed to get up to get more soda or water, which the Rangers have so kindly provided.

After watching a Frenchman have an intense phone conversation and having a fun conversation with Spesh while staring down a lizard that does way better push-ups than I do,  it’s back to the trail, pressing on towards the Acton KOA for the evening.

Except it’s not evening yet – or, at least, the heat doesn’t make it seem like it. Still, we get some of the best views of the day on our walk.

And the best conversation, too – Sasha and I talk Trump and feminism and selfie culture and and and, meandering our way down and way, way more up than I expect. We also talk about the pizza we want to order when we arrive at the campground – it’s definitely a factor in pushing all the way.

Near the end, I’m lagging, where Sasha turns on the turbo, powering through those last few miles. My feet are starting to feel the mileage – I’ve been ambitious today – and so it’s plod plod plod in the coming dusk. 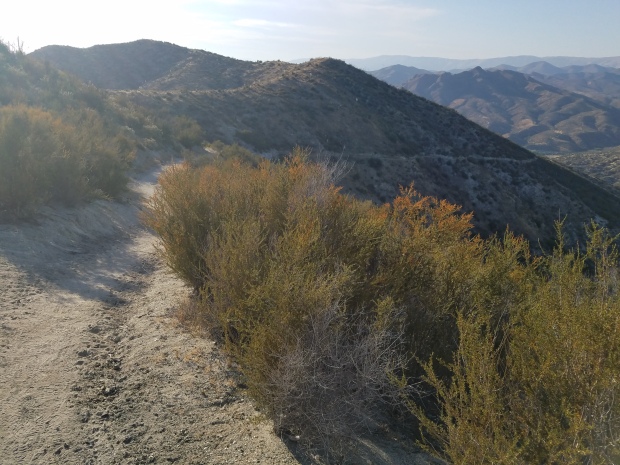 Finally, FINALLY, the road, a bit of confusion as to where the trail goes, then a road crossing and an RV graveyard before I arrive at the Acton KOA.

I hear the hikers before I smell see them, a raucous group that’s taken over the gazebo and strewn pizza boxes and beers both full and empty everywhere. It’s a little overwhelming after the relative solitude of the day, and it takes me a while to warm up. There’s no pizza left, and while we try to order they quote us $50 for one pizza. Neeewp.

After some vaguely disappointing trail food, it’s all a little easier to handle, especially when I spot some folks playing Euchre. I hover until a seat opens up across from someone learning to play; we get to 8 points before we get our asses kicked. Womp womp.

It’s past hiker midnight, and the gazebo is still bumping, so Sasha and I make our way to the other side of the KOA where a bunch of hikers are circled up. They invite us to join, but there’s no room; we settle down nearby and are regaled with several people’s first memories. It feels private, like eavesdropping – and then a train comes by, shrieking through the dark, and I put in my earplugs and am out like a light.

We’re working on the next verses. They involve butt-chafe. Exciting.