I feel marginally better in the morning, but I’m not taking any chances. I take 800mg of ibuprofen – anything else doesn’t even take the edge off – and pray I don’t have any incidents. Soon enough, Sasha and I are off and on our way.

Turns out, there were a ton of places to camp nearby. Not that I would have made it to any of them, but they were nearby. And soon enough, mile 400! 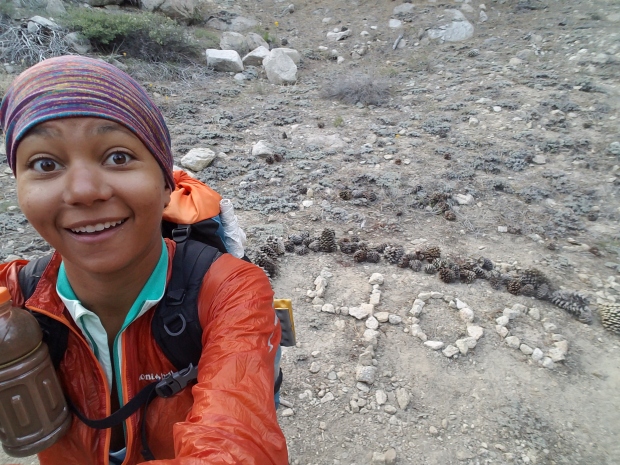 And shortly after, Camp Glenwood!

It’s a boy scout camp with a privy and water; the caretaker even offers us the filtered kind, but I have enough to make it to the next source. It’s his birthday, though, so I wish him happy birthday in between chatting with Hawkeye, Spaceman, U-Turn, and Lipstick.

At the next road crossing, we see what we think is trail magic or day hikers, but seems to be a mother-daughter pair getting back on trail. Fun times. Then it’s getting along, little doggies, down through a burned area with poodle dog bush towards Sulfur Springs.

After the turnoff, we pass the mother-daughter pair, pass another hiker in some amazing shade – a rare thing in this area – and, at a saddle, a whole passel of what have to be day hikers or overnighters or something. They’re too clean to be anything else.

Shortly after they let us by, we run into Nightcrawler, stop to chat, they pass us again. Then we pass them with their heavy packs exploded – baaasically right on top of some poodle dog bush. If the wind moves, or someone trips, either a stuff sack or a leg is going right into the plant, but when I warn them, they seem unfazed. I don’t know how – I’m still freaked out about it. So many warnings leaves one freaked out.

Dodging the Notorious PDB, we reach the Fountainhead Spring – which I’m sure was worthy of the name at one time; now it’s barely a trickle. I don’t see any PDB, so I climb up to see if it gets any better – no such luck, though. Sasha’s down at the bottom using a leaf to funnel into one of her bottles, and while I flail around at first, it works for me, too. Belatedly, I notice the dead PDB in the way-ish of my climb – did I brush it? Does dead PDB work the same as live PDB? Welp, hope I don’t have to find out.

Sasha and I decide to do lunch at a campsite a ways uphill; when we arrive, Odin, Bourbon, and Banshee are already there munching away. We use a pine tree as a backrest while Bourbon and I chat about his namesake. They all ask about the mother-daughter duo – they’ll probably catch up soon.

They leave before we do, but we’re off as soon as we’re finished – no lollygagging as we finish this climb much sooner than we think we will. Then it’s down, down into the Mill Creek Ranger Station.

The – Ranger? Fire? Both? – Station is full of hikers, some of whom I haven’t seen in a while, a number of whom I’ve never seen before. We’re a lively bunch, and I pass the time by eating dinner, treating water, doing laundry, trying to ignore Odin and his lady Freya’s reunion banter. Spaceman, U-Turn, and Hawkeye show up; I find Evac, Outro, and Yoda in the register from earlier today. So many people who’ve been through – I feel like I’ve fallen so far behind! – and I sign my name to make my presence here official.

Sasha and I decide to push on for a little longer, get to the split where the PDB detour starts, so it’s off for one last up – and this time, the view’s much prettier.

Spaceman and U-Turn both pass me, and suddenly we’re in this strange forested land, an oasis for the eyes. It feels quite magical.

We arrive to a Guthook-called “tentsite” that isn’t even flat, and then get to a parking lot for the closed road from below. Looks like this is it for the night. But what a front porch!

A ton of hikers roll in, and it’s suddenly a party in the setting sun, complete with requisite dirt jokes.

Since the Trail Gorillas said the trail was mostly clear of PDB, we’ll take the trail tomorrow; for tonight, it’s shushing a latecomer as he sets up and settling in, with creaks and groans, to sleep.