The train is my alarm in the morning – the earplugs do nothing to block against its screeching, and while I try to go back to sleep, my alarm is having none of it. Most people are still asleep – a lot of folks are taking a zero at the KOA to use the pool and generally let loose while not under the auspices of a trail angel – but Sasha and I are trying to beat the heat for the last 10 miles into Agua Dulce. So it’s up and filling water bottles and enjoying another trip to the flush toilet before heading out the way I came in and hitting the trail once more.

We cross the railroad tracks and immediately hit a small monument. It doesn’t really stick out, but it’s pretty cool nonetheless.

Then it’s on to our gorgeous morning climb out of Acton.

It’s always super gratifying to me to be able to see the terrain I crossed yesterday or the day before from today’s vantage point, and we get that in spades this morning. 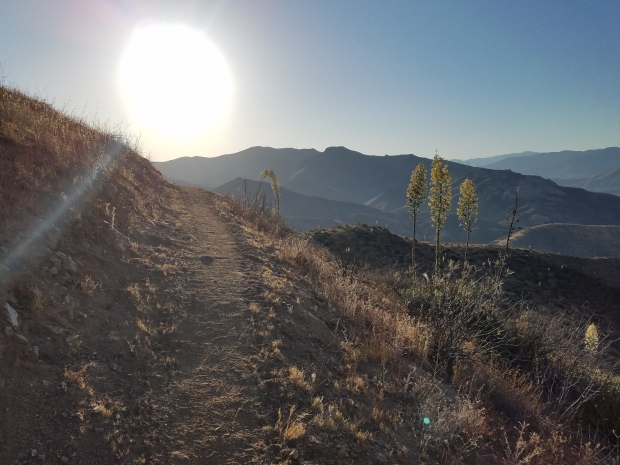 It’s 7am and it’s getting warm already – how is it this warm already? – and we come across a gentleman having breakfast in the middle of the trail. I mean, sure, it’s shady right there, but maybe there are better places to stop? Just spitballing.

Finally, we’re over the hump, and Sasha Turbo turns on the speed and sails on down the downhill. Byeeeee. My knees won’t allow for such, but I’m still enjoying the down and eventually the flat, once we get close to the highway and the long dark of the underpass tunnel.

The end of the tunnel is a tiny little speck of light when I enter, that slowly grows larger and larger, dumping me into a bright green world that must’ve had water at some point.

Plants and rocks and stuff start to be labeled, and soon I’m walking in this awesome canyon that would’ve made sUCH AN AWESOME CAMPSITE but it’s pretty cool during the day, too, despite the heat. 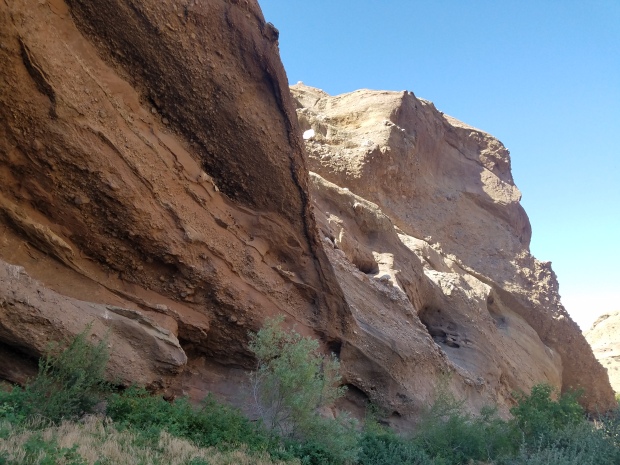 I pass a blue-haired hiker on the uphill, crest the hill to find a sign marking the location of a fire in 2007. There’s not too much sign of it now but the sign itself.

The whole area is a day-use area, and I run into a runner who tells me there’s only a mile and a half left to town. I’ve actually just checked – there are like three – but I’m still super pumped about his enthusiasm.

It is a day-use area, though, so there are a million trails leading all sorts of everywhere – it’s hard to tell where the actual trail goes, and like an idiot I just follow the hiker ahead of me down the wrong path. The Altras tell the tale – once those very distinct tracks disappear, or start primarily heading the other direction, you’re going the wrong way – so I scramble back up a hill and am back on the path. 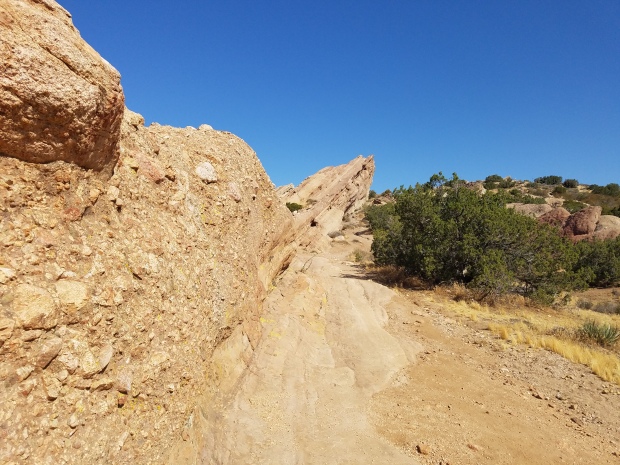 The whole area is like this, even though I’m being careful; plus, after a parking and picnic area the trail heads up a tiny, relatively steep gully that looks absolutely nothing like the PCT. Still, we get to see more cool rock formations, counting down to what I imagine is the road.

And then, the road1!

There’s a nice shoulder, and Fearless is ahead of me, walking on the other side of the road. She passes the turn into town – she’s too far away for me to yell out – but a nice driver stops and points her back in the right direction. As she backtracks, I catch her, and we chat lightly as we cruise through the shade into Agua Dulce.

It’s a super centralized town – just a few buildings with a grocery store, a hardware store, and some restaurants, one with a $5.99 cheeseburger and fries special today – which is all a thruhiker really needs anyway. When I arrive, the “shuttle” to Hiker Heaven is close at hand, so when it comes I pile in Donna Saufley’s truck bed with the other waiting hikers. One of the folks hiking out tells me that the first thing I do should be to sign up for a shower because the line is super long, and I thank them just before we speed away from town.

Hiker Heaven is a mile and a bit down the road, and as we all pile out of the truck and through the gate, it’s Donna – L-Rod – herself that gives us the rundown. There’s laundry service available, with loaner clothes and bags for our gaiters and camp shoes for those of us who don’t have any. In the garage is the laundry drop-off, and a board with all the information we could need – menus doctors water reports – and a shipping center besides. Behind us are the internet tent (with laptops!) and the shipping tent (with sodas and sewing supplies!), and around the house there’s a trailer that’s ours with a kitchen and a fridge and a TV with internet and the shower that I need to sign up for. There are hiker boxes and a grill and WiFi allll over the property. Out by the horse corral there are portapotties – the only rule is no catholes in the yard. In said yard is a sea of tents – hikers, hikers everywhere! It’s all very overwhelming, but I manage to put my name on the shower list and hang my condensation-damp gear out to dry before sitting in an attempt to process it all.

My package hasn’t arrived yet, so I pick out loaner clothes and shoes – there’s a tank top, so my shoulders can breathe! And capri leggings to relax in! I develop a rapport with Doug, who’s the volunteer in charge of the laundry, and chat with Big Salad Puma and some of the others getting ready to leave when my name is called for the shower. Inside are all the amenities a hiker could want – razors brushes shampoo conditioner lotion – and the shower is everything a hiker dreams about on sweaty, 100F days like this.

Afterwards, I submit my laundry for washing, go stake a claim out near the horse corral as far from the fire ring as possible to avoid this evening’s inevitable festivities.

I don’t know what’s in the resupply box Momma’s sent me, so I can’t supplement said resupply properly, but I do decide I want some alfredo sauce. I do internet chores until the next shuttle, which is just me, so I get to talk a bit more intimately with Donna, talk to her about Spesh – they know each other well – and we talk about him all the way to town. At the store, I grab all the milk parmesan cheese for my pasta and some hot sausages to grill besides. Pizzabeans shares his ice cream while we wait for the shuttle back, but I bail on it for one of those cheeseburger specials – or I try to, but they’re closed from 3 to 5. I manage to catch the shuttle back in time, and throw the sausages on the grill. I eat four, give one to Pizzabeans in repayment for ice cream, and one to Steffen, since I haven’t seen him in forever.

My laundry is done, but these loaner clothes are comfortable, soft against my skin, so I keep them on. I go through my package when the mail arrives – it’s a treasure trove of healthy food, and I feast my eyes on the card as much as the contents.

Afterwards, I think it’s Game of Thrones time, but we can’t figure out a way to get it on the TV, and the WiFi is going in and out, so I get halfway through on my phone before I give up and join the others in a rousing watch of Zoolander.

I’m stubborn, though, and as we all break off for the fires or for bed I curl up in my sleeping bag to watch the rest of episode five on my phone. I make it work, and the laughs and merriment of the folks around the fire follow me through Westeros and into sleep.

[1] It’s strange to me, after seeing the monument dedicating the “completion” of the “trail”, that not 10 miles away there’s more roadwalking. I mean, I get it – and it’s nice to literally walk into a town – but still, strange.