Crankster and I wake at our accustomed hour, aren’t outside for more than a minute before a biker rides up from Durango-way, asking about water. Lucky man, water’s less than five miles from here for you. Us, we’ve got about fifteen-ish miles to the next source. He thanks us and rides on, and I fret about my water situation. As the idiot who ate an entire package of jerky last night, I also drank an entire liter of water to rehydrate said jerky in my stomach, so I have two liters and a full Gatorade bottle to make it fifteen miles. Should be fine. Should be.

We’re trying for another twenty miles today, and today’s our last big-ish up, going from ~10,800 feet to ~12,250 feet – we’ll never be as high up on the trail again as we will be today. It’s a sobering thought, and we don’t really talk about it. This feels like it’s the last real day, since tomorrow it’s down down down, all the way to the outskirts of Durango. Today, we’ll still have big skies, be perched over wide open spaces, see the trail how it’s meant to be. The weather’s supposed to be obliging, and we spend some time on our “porch” just soaking in the morning view, with hardly a cloud in the sky.

Then, there’s no more time to dawdle: there are miles to be made today, and they aren’t gonna make themselves.

I spend a lot of time taking photos behind us this morning, looking back at what we’ve already traveled, how far we’ve come. I’m trying not to get all sentimental, but its difficult: the word “last” keeps echoing in my head – last ups last views last last last – and I find it hard to get that voice to shut up so I can appreciate the walk.

Crank saves me with conversation, and we chat chat chat and I suddenly pull up short. Off to the left of the trail, there’s a fallen tree with the word “WATER” and a couple of arrows pointing behind it. It’d have been easy to miss as a Northbounder – which is, we’re pretty sure, why no one’s told us of its existence, even with all of our asking. Sure enough, there’s water back there, albeit sluggishly moving, so we sit and dry our things and lament having carried this much water this far. We chuckle our complaints away with the wind as we camel up, refill – better safe than sorry.

We’ve practically just started walking again when we see a sign for a side trail with a viewpoint. We almost pass it, but this is almost our last day to see such things – there’s that “last” again, hovering over everything. It twists my arm, so I drop my pack to go see what’s what and suddenly, I’m light and free, skipping down the short path, leaping over logs to stretch my legs. Crankster, pack still on, chuckles at me, though she agrees when we arrive that the view was worth it.

We return to the trail where it begins its climb in earnest, but our talking eases the way – talk of social wrongs and womens’ rights, how to be a good ally on the internet. It’s nice to listen, and to talk, but also to actually be heard, considered, thoughtfully responded to. My heart is full to bursting – I’m so, so glowing-glad Crankster and I ran into each other at Monarch Pass. What would my hike’ve been like without her?

We see signs for Kennebec Pass, which’ll be the beginning of our long down into Durango. And the views, oh, the views!

We drink them in greedily, take more breaks than we necessarily need, just stop and stare and sort through not only what we see but what we’ve seen, what we’ve done.

I get a little obsessed with the panorama feature on my cell phone camera, but tomorrow, we’ll be headed under treeline, and the weather’s perfect and the mountains are beautiful and I’ll be damned if I’m going to leave this vastness, this heartbreak, out of my memory stash. 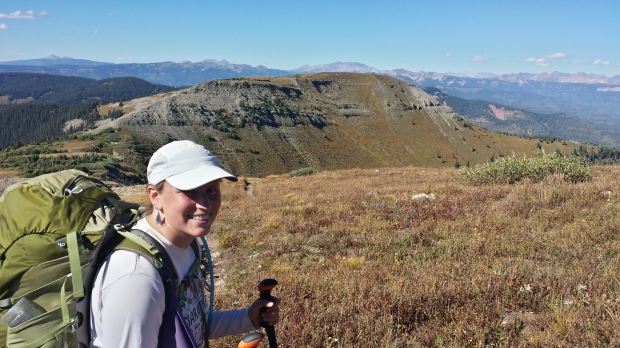 We’re nearing the top, sidle along beside some rock piles when, perhaps for the last time, we hear my favorite sound in the world. 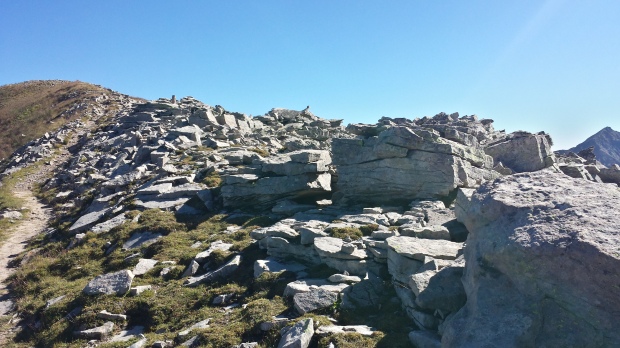 There’s a pika perched on a rock, looking regal as fuck, screaming its lungs out at the heavens. The Lion King running through my head, I grin, get closer, take pictures.  Scream on, you adorable floof, you. 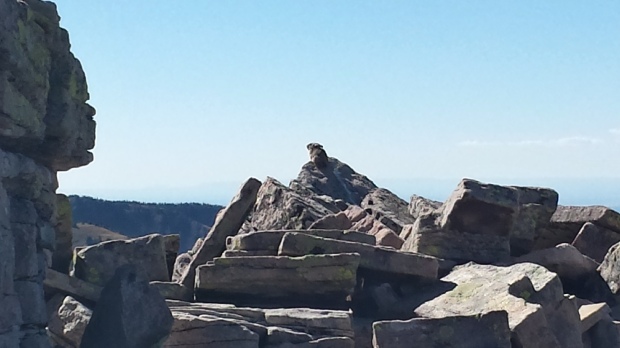 I feel a lot like that pika in this moment, finally strong, finally proud of my accomplishments, wanting to screech my presence and make a mark, quickly fleeting, mark on the mountains. I’d say that’s freedom, but I know it’s just a different kind of being. 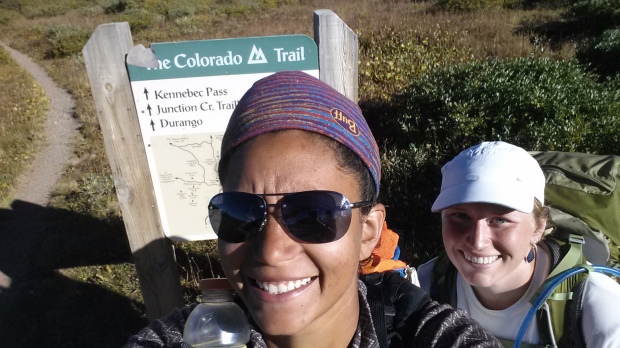 Kennebec Pass is our last pass and our next-to-last up ever, and it’s about as underwhelming as Kenosha was nearly 400(!!!) miles ago. We’ve come a long way, baby. 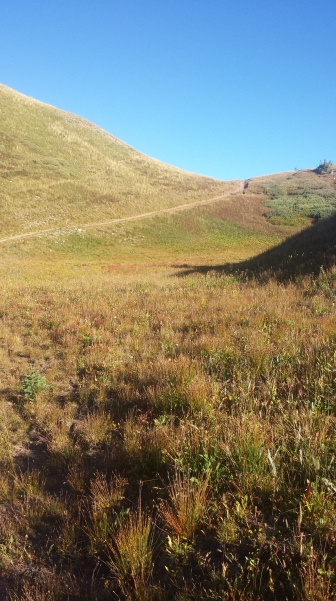 Fifty-eight feet of up, however will we manage?!

On the other side of the pass, there are houses perched on the pass’s edge. How do they get down in the winter? How do they get their mail? I imagine the trail-buffest mailman I can think of, delivering the mail in rain and snow and sleet and hail. I pretend my pack is full of mail and I start to swagger down the trail, anything to keep my mind off the ending that is close at hand.

The guidebook describes the next hiccup of trail as a “Sliderock talus slope” that hikers should “use care” crossing. I try to follow the given edict, but my still-cranky foot makes it difficult, and while I’m watching where I’m stepping the trail is stabbity-stabbing it over and over, finding the sensitive spots every time. 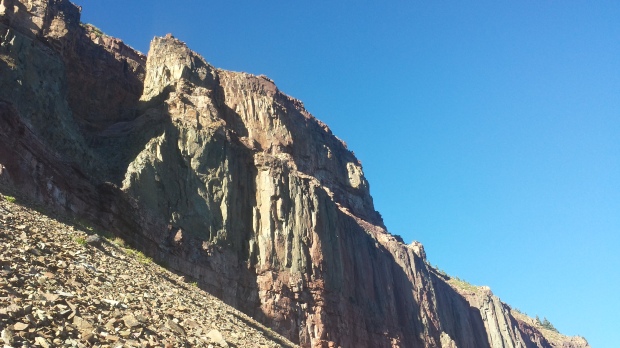 It’s talus, talus all the way down. (Also ouchies.)

The talus ends but the pain doesn’t – I’m actually limping all the way down to Champion Venture Mine Road. There are campspots along the road, and we’ve pretty much made the 20 miles that we were looking to make, but it’s only 5:35, and there are ostensibly campsites just down the trail off the road. Still, both Crank and I are worried about maybe getting run over in the night, so she offers to run ahead and check for possible sites further down along the trail. I feel like an ass as she runs once, twice; she found a spot the second time that was trashed. Better we maybe get run over than maybe cut our gear, ourselves, with shards of broken glass.

We can talk about it now – the end, that is, the prohibition lifted now that we’re less than 24 hours from being done – and we do, and it’s strange and odd and not exactly pleasant. I grumble about the amount of food left in my pack; Crank prays her car’s still at the trailhead. I don’t think i’m going to be able to sleep, so many ponderous thoughts about tomorrow flooding my brain, but it’s dark, and after all this time, my body knows what to do.