It’s the first of our three twenty-mile-a-day attempts to get us to Durango, and we’re rearing to go. I’ve gone and shocked myself by actually looking forward to it, wanting to see what a month of walking can do for my ability to walk a lot in a little bit of time. So we’re up and out early, carpe diem-ing and all that.

We’re glad when we hit Cascade Creek that we didn’t continue on; Fire Hazard and Schwinn are packing up in the spot we were hoping to stay in. They’re northbounders, and we trade trail names and pleasantries and forget to poll them about the upcoming waterless stretch before moving on. 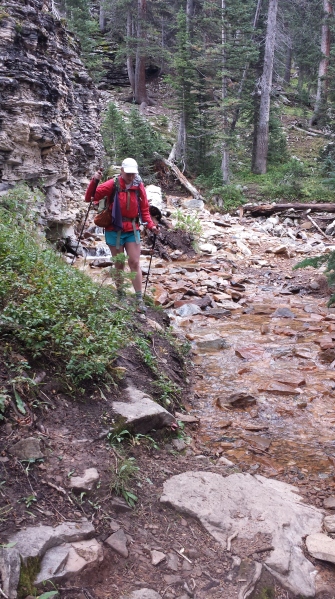 The clouds are hanging low, but that doesn’t make our views of Cascade Creek any less beautiful.

A little more washed out for the camera, maybe. 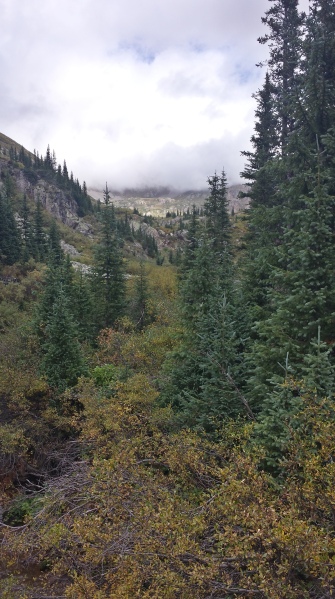 Then we leave the creek behind to climb up up up and I take a short break to deal with my rebelling bowels. We meet another Northbound thruhiker on our way up who says the waterless stretch in Segments 26 and 27 is, in fact, waterless. Womp womp. I’m not looking forward to carrying 4 liters over 22 miles, but a hiker’s gotta do what a hiker’s gotta do.

Finally, we hit the saddle, take some pictures before the downhill to Celebration Lake and Bolam Pass Road.

The Forest Service Road between thither and yon is basically one giant puddle, multiple feet deep at certain points, that we feel bad about skirting but do anyway. It’s enough to make you wish repeatedly that the Forest Service had more funding that didn’t come from logging.

Once our soles are thoroughly caked in mud, we reach Celebration Lake and the end of Segment 25. 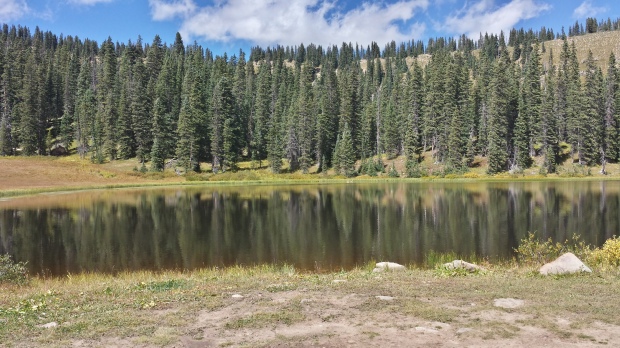 A gentleman thru with a large black pack stops us in the last 20 feet to the lake to chat, says he’s been doing 5 mile days from Durango, even through the waterless stretch – he again confirms for us that it’s a thing. He’s pretty happy to be continuing onward, to get the water weight off his back. At five miles a day, that’s a minimum of 4 days without a water source, and I’m a little scared to know how much water he’d been carrying, how much his pack weighed. Mine’s still too heavy, but I pledge to cook and eat something for lunch while our things are drying.

We lounge for a while while I do so – it takes so long! – and I remember why I hate cooking on-trail. Crank and I talk cook systems; she’s got a JetBoil and loves it, and I’m considering switching to either that or a stoveless cook/rehydrate system for future backpacking trips. I’m briefly appalled at myself that I’m thinking of future backpacks with 70-odd miles left, but also kind of pleased.

Then we’re up and off, into the wilds of Segment 26.

This segment’s supposed to be flat, and I’m more than a little resentful when it’s not, all hills and dales and rassum frassum stupid ups. Still, the scenery is pretty alright.

We cross paths with a hiker from LA, who started the trail in Durango recently. Most people, from sea level or no, start in Denver, mostly because the trail quickly jumps from the 9000-foot Durango start to 12,000-ish feet, and then stays there for a significant portion of the trail beyond. I wouldn’t want to acclimate to altitude that way, but he seems to be in good spirits, telling us to watch for his sister somewhere behind us. We see her about a quarter of a mile behind him, clearly on struggle street. I wonder if she’s having a good time. I wonder if I looked like that earlier on the trail. 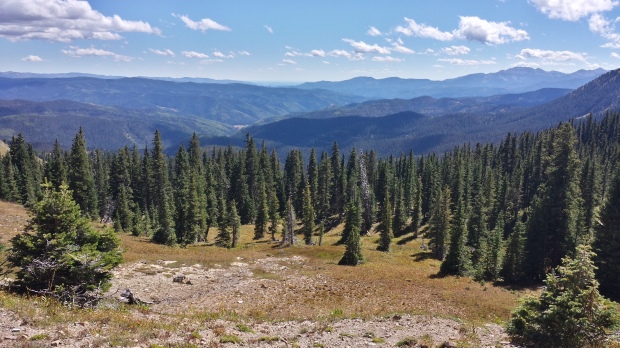 I’m still feeling strong as we wind our way up and around – I attribute much of that to my beloved Honey Stingers, distraction and sugar combined1.

Blackhawk Pass is one of the more distinctive passes we’ve approached, all striated in red and grey. I’m sure Spesh would have something to say about what the hell happened to make such an interesting pattern of rocks, and I miss him terribly in that moment.

But then, the top!

It’s the first time I’ve beaten Crankster up a pass, and I marvel at how good I feel. We take a break up top, and the 36-hour ban gets invoked more than once – we’ve made a pact not to talk about the end of the trail until we’re 24 hours from the finish, a day and a half from now. We want to enjoy as much of the trail as we can, now that we’re nearly off it.

Then it’s down off the pass to Straight Creek – nearly overflowing its banks, it’s the last water source for 22 miles, and we both camel up2 and fill up to four liters each, to the aching of our collective joints. And then there’s wAY MORE UP THAN WE EXPECT coming out of Segment 26 onto Hotel Draw Road.

Then it’s up a road grade for a while, dodging ATVs and crossing many much roads as we weave in and out of an apparently well-used hunting area. We’re on our way to our last up of the day, and I’m happy to eventually leave the road and all the hunters behind, getting back onto a proper trail.

The last up is killer, and I’ve got Fun. on blast in my head – I don’t have the breath to be able to sing it properly, but I’m impressed that after not listening to music for practically a month, I remember as many lyrics as I do. I’ve pulled ahead of Crank again; she’s clearly hurting. I offer to stop a little early, but she wants to push through. She’s strong, so strong, but I want to do what I can to help her.

Finally, we reach the Corral Draw Trail junction, after which there are supposed to be campsites. By now, I know the guidebook well enough to know that means we’ve got about another quarter of a mile to go. We go two-tenths and find some passable spots, but something tells me to check a bit ahead, so I wander off while Crank rests; tadaaaa, there’s a fantastic spot with a fantastic front porch and 4G cell service all dolled up and waiting for us.

We set up and I huddle into myself, munching rye chips and Snickers bars and generally admitting that this whole cooking thing isn’t really working for me. All the water I’m carrying combined with all the food I’m not eating is making for a terribly heavy pack. So heavy, I discover, that I’ve torn a small hole in the bottom of my pack.

I’m devastated, but texting Spesh leads me to believe I can fix it once I get home. I eat an entire pack of jerky to drown my sorrows – hey, at least I’m hungry now, even if there are only two more days left.

Two days left. I break the rules and think about the end of the hike, and all I’ve got for the thought is just a void inside, a vast emptiness that I’m not interested in investigating further. I snuggle up to Crank – this whole tent-sharing thing is pretty nice, especially when it’s cold – and conspicuously don’t think about it until I fall asleep.

[1] I swear to god I’m not an advertiser in disguise. I actually just love these things.

[2] When you chug what water you’ve got left at a water source to make sure you’re hydrated before you leave, that’s camel-ing up.