My alarm goes off early, 5-something. I wanted to get up early, but my sleep-addled brain thinks the moose will hear, and I shut it off since it’s still dark outside and there may be moose lurking out there. I’m actually awake at 6, out of camp by 6:30. Never have I been motivated to move so fast.

It’s an early climb to Georgia Pass today, and hitting mile 80, I get the first of my morning views. 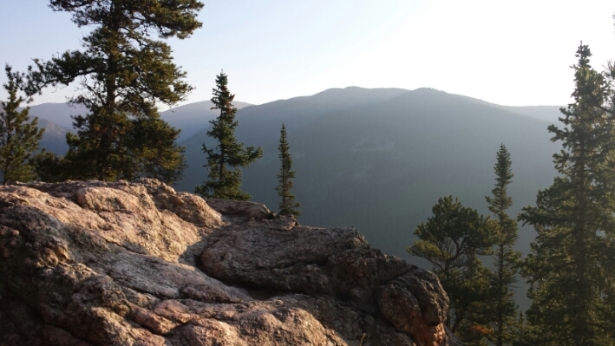 At mile 81 there’s a nice forested campsite on the climb, occupied, but useful for another time. The trail’s pretty well graded, better than I thought it’d be, but it’s supposed to get rougher past treeline. I’m moving quickly this morning, even with the moose forgotten, and pretty soon, I start to break out of the trees.

I’m huffing and puffing a little more – the pass is at 11,874 feet, the first time I’ve been up this high on the trek/ever? – but it’s nice to have a view while I catch my breath.

The Jefferson Creek Trail comes out near the top just before the pass, and there are some ladies camped up there. I want to say hi, but they seem busy breaking camp, so I walk on by.

And then, the pass!

It’s windy, but the sun’s warm, and I eat a celebratory snickers while I’m waiting for my SPOTs to send. The two ladies – Jane and Sarah, I learn, a mother-daughter combo out for a 100-mile trek to celebrate Jane’s 67th birthday – stop to say hello, and I’m glad for their momentary company. They pass on by, and I wonder if I’ll see them again.

The Colorado Trail joins up with the Continental Divide Trail for the next 314 miles after the pass, and I’m happy when I see my first CDT sign.

I catch up to Sarah and Jane a time later, and we chat about my hike, Sarah’s time on the Colorado Trail ten years ago, her Pacific Crest Trail adventures, her experiences guiding teenage girls in Wyoming, my Youth Corps summer experiences, her art. We arrive at my intended campsite around 1; we’re chatting, and I talk about how bored I’m going to be the next couple of days – I intend to do low mileage to roll into Breckenridge to meet M on Saturday. I eat an entire salami. Just… by itself. The whole thing. Sarah and I are both impressed with me. It’s probably not because of my impressive gastronomic feat, but both Sarah and Jane enthusiastically offer to share their motel room with me on Friday. It being Thursday and all… well, I’m motivated to make a few more miles with them, even though I’ve already done 13.

So I start my second climb for the day, up a section “maintained” by the Summit Fat Tire Society. Clearly, they are a mountain biking group, and clearly, this section was made for them. I count, on the way up, a grand total of two switchbacks. Two. It’s like they were acknowledging that switchbacks exist, but decided “nah, these aren’t great for mountain bikers, so we’ll just leave those out.” Sarah, and even Jane, at 67, leave me in the dust, and I curse the mountain bikers all the way up that hill, in colorful and melodic epithets1.

Of course, on the other side, there are switchbacks, and the way is steep and narrow. I catch back up with Jane and Sarah, and we make our way carefully down the hill. Jane falls once – a once-a-day occurrence, but how not, with the steepness – but we manage to make our way to mile 97.1, a campsite that’s supposed to – but doesn’t – have water. We decide to stay anyway rather than face another climb, eating snacks instead of cooking. I don’t have much in the way of  snacks that look appetizing, though I do have so, so much food; I munch what I can and put everything away early.

We’re relatively in the open, and I manage to catch my first sunset on the trail.

It’s hazy and dreamy and perfect, a warming end to another nearly 19-mile day. I crawl into my tent and actually get some writing done for the first time in a while before drifting off.

[1] The words “smarmy” and “bastards” came up in relation to each other a number of times. I, of course, didn’t have the heart to say any of this to the innocent, kind biker who showed enthusiasm towards my endeavor near the top.