I spend a cold night in what I discover to be my u-shaped tent spot. Not wet; I’ve got a pretty baller shelter, but cold nonetheless. It’s hard to hear because of the rain and the nearby stream, but I wake up to a rat’s silhouette clinging to the outside of my tent. Twice. Good to know that my Tarptent is marginally rat claw-proof.

In the morning, though, it’s all smiles as Nancy, Terri and I muse about the night before; they’d had some rodent troubles, too, clabbering on the outside to get in. We have a bit of breakfast and I ask them if they know of any camping below Georgia Pass, which I’d like to approach first thing tomorrow morning – they say the Michigan Creek area should have some, but that I should be wary of moose in the area. I’m packed before I know it, and it’s a final goodbye before moving on. I wish them well for the rest of their trip – I admire their commitment to learning all the new ins and outs and changes to backpacking, and their desire to be outside, generally. Gives me hope for my future.

Up, now, and out of the valley, and into a beautiful morning.

A bit of time with the views for company, then it’s back down into Johnson’s Gulch. This morning’s route is like a dolphin playing, and I feel like I’m skipping along the surface of the hills. This part of the trail is beautiful, high prairie, a sea of wildflowers accenting the view as I climb towards Kenosha Pass.

I realize I have few pictures of myself, so take a few selfies, each more ridiculous than the last, and none of which a rational human being would put on the internet.

I catch up with Two Shoes; we chat for a bit about snacking habits and getting older before leapfrogging all the way to the pass. We get a lot of the same pictures; these are the best views we’ve had so far, even if it is hazy from the smoke from the wildfires raging in Oregon and Washington. I feel selfish, but I’m glad I’m not on the PCT right now, and my heart aches that my view is as clear as it is.

More aspens along the descent to the pass, all of them looking much cheerier than their brethren a few days ago. They murmur politely amongst themselves as I pass through. 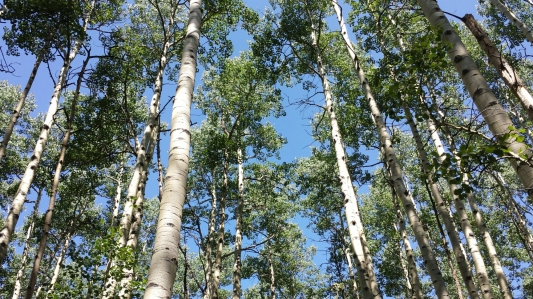 Kenosha Pass is the lowest pass I’ll encounter on this trek, and by itself it’s not particularly impressive – more of a roadside stop than anything to write home about.1 Two Shoes is right behind me, and we co-opt a campsite on the east side of the pass for a short while to eat lunch and talk politics. It’s good conversation, and I’m sorry to see him chase down a ride into Jefferson, though not before he fills my water bottles, for which I’m thankful – now I don’t have to go hunting for the source that’s supposedly here. (I’m not even sure if there is, or where it would be.)

The trail crosses the highway – the pass proper, and the beginning of Segment 6 – and then climbs to give more views. 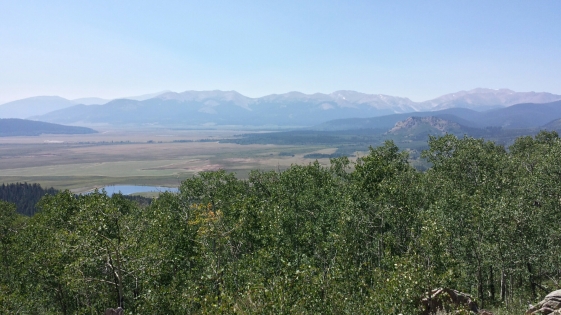 On the climb, I meet two Jersey Boys, albeit not the singing and dancing kind; they look like they aren’t sure what they’re doing – they got in yesterday, they say, saw a sportsball game in Denver, and now, here they are. I’m not sure if they’re day-hiking or what – both have fully loaded packs, but they’re taking it all in, so I leave them be. We leapfrog for a little while, and I come across them filling their 12oz water bottles in an irrigation ditch. I worry, but don’t want to seem lecture-y, so I move on.

Upon my arrival, the campsite I’d heard was nice at 74.8 seems less remote than the databook suggested – it’s still a nice spot, which is why I imagine the ATV track has popped up around it. It’s loud and obnoxious and far from Georgia Pass and it’s early still – so early! – so I continue on my merry way.

The Jersey Boys pass me, and then backtrack, swearing they’re not lost. I raise an eyebrow, but they refuse my offer of help, so godspeed.

I read the signage just outside of Jefferson Creek – the Colorado Trail in this section is rarely graded over 8% YESSSS – and decide to do dinner at the creek itself. I manage to cook and even eat my whole dinner, in between drying my tent, brushing my teeth, taking care of cathole business, and, of course, soaking both of my shoes in the creek when I go to refill my bottles for the dry camp. Womp womp.

There’s no camping labeled as such beyond the actual campgrounds a few miles up from the creek proper, but between Terri and Nancy and the favorable topography, there should be a spot somewhere. Between the clouds and the evening, the light’s fading, and I pass by a couple potential spots in my hunt.

Rounding a bend, I spot the weirdest, largest tree stump I’ve ever seen, and I figure there must be a good, wide, open space over there to accommodate that. I take a couple steps forward, staring, before I think to remove my sunglasses.

That’s no tree stump. That is, in fact, a moose calf, frozen, unsure of what to do with me.

Rising panic as I take a couple steps back. My only previous encounters with moose include staying in a campsite where a ladymoose decided to trash a tent for no reason, and, later, waking up to a bull moose and calf munching on a bush about 15 feet from the tarp; I’ve heard horror stories about moose charging hikers, about how they’re more concerning than bears, really.

I take a couple steps back, and the calf seems to be alright with that; I catch unidentifiable-but-probably-also-moose movement in front of it, and whaddaya know, a bull moose, albeit a smaller one, behind it. I hear they have shit for eyesight, but excellent hearing and smell, so while I can do nothing about my ripeness I try to stay silent; I’m hardly breathing. The bull moose doesn’t notice me, or at least, doesn’t seem to care.

Me though, I’m electrified, motivated to put as many miles as possible between myself and the moose as possible. I make it about two before the trail starts to climb and the light makes it hard to see. I set up in a tiny spot, squirrels screaming their displeasure, and eat a snickers before turning in, all while trying to make as little noise as possible. On edge, I “settle” in, hoping I don’t wake to a moose deciding to destroy my tent.

[1] Although there are toilets, which I’m actually pretty thrilled about. The novelty of a hole in the ground you didn’t dig yourself! And also there are walls! And a roof! What is this madness.