My alarm goes off at 4:30, but I lay there in the light-enough-to-see-by until 4:45, just watching the day begin. Our plan was to make it out of camp by 5:30, but the fact that it’s so bright already at 4:30 is unnerving; yet another aspect of this trip I didn’t prepare for. I don’t know if I want this – it’d be easy enough to just turn around, head out the ten miles we headed in and what is this, what are these thoughts that I’m having, wanting to end something that’s scarcely begun. That’s not how we do things with this human. Get it together.

By the time we go get water – to which the newcomer from last night rushes to go ahead of us, okay, whatever dude – it’s already 6am. We’re slow and out of practice. But we’re only going ten miles to water, so it should be fine.

Famous last words from yesterday, I remember. So instead of two and a half liters, I load up with four. Can’t be too careful, I guess.

We’re surrounded by high canyon walls for a while, but eventually, the sunlight finds us.

We dive into Upper La Barge Box to escape, but find the terrain harder: it’s straight up, scrambling over rocks and upcanyon across the wash to scramble even more up, to scramble back down, to scramble straight up again. My body, soft from a year of sitting in a car, is not ready. 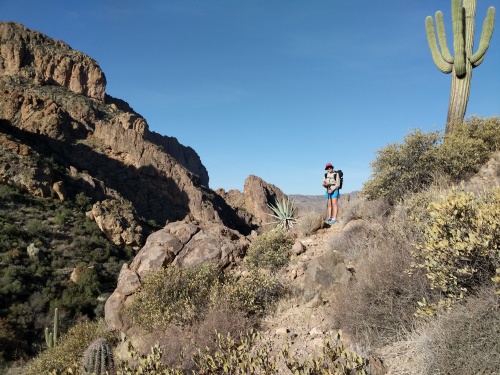 And then we round a corner into full sunlight for realsies. 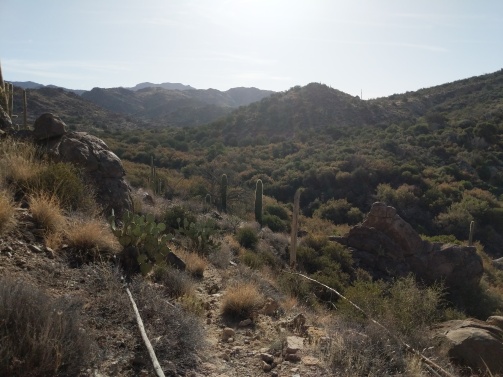 There’s no protection here – we’re under the sun with no shade except our sunbrellas but even with that bit it’s still hot, so hot, so early. We take shelter in the first rapidly-dwindling rock shadow we see, where I sit and cry again – what have I done?

I’ve never thought about quitting so much at the beginning of a hike. Ever. Yesterday felt akin to my first day on the Colorado Trail, sure, very ohgodwhathaveidone, but I don’t remember the urge to quit being this strong. I know, I know, we’re in the middle of a heatwave, and maybe, maybe this heat will eventually back the fuck off and make things easier, but in the meantime, what’s a body to do? Pineapple is probably tiring of all the blubbering, but outwardly she’s still good-natured, seeming to understand what I’m feeling. Small mercies.

I’m happy for this break in the shade, happy to take more breaks throughout the day to try to make up for the sufferfest that yesterday felt like, but always, always, the clock ticks forward, towards the hottest part of the day where we’ll be forced to sit, to do nothing, to while away the hours better spent hiking. Guess we better move.

We’re not walking for five minutes, Pineapple taking the lead to give me a break, before a sharp buzz comes from a nearby yucca plant. Pineapple nearly falls over backwards in an effort to get away from it, and my slow brain finally catches up – rattlesnake1. It’s a vaguely green creature, apparently, and pretty sassy even though it’s slithered its way away from the trail proper. Maybe it’s a Mojave Green, maybe it isn’t, but it’s not about to let us come anywhere near it without being grouchy. We manage to pick our way through the brush a ways off the trail, to leave it in peace.

We head up towards a pass, and I look for the trail as we walk without looking at the map; it seems there’s a line in the hillside, gently making its way from the halfway-ish point up the slope where we are up to the saddle, where we’ll cross over into the next valley. But nah. Instead, we drop nearly the whole way into the valley before pushing uphill on the other side all at once. This is starting to become a trend.

At the top, I need a break, and we sit and I force food down my throat, tentatively lick the back of my hand, find it salty. Before I know it, I’m taking advantage of my one-day-out cleanliness and bathing myself like a cat, taking the salt on my skin for another go-round. I didn’t pack enough gatorate-equivalent for this leg, and something’s got to give.

One of the somethings is, of course, our sitting in the shade. We’ve gotta walk.

So it’s down a sketchy, steep, talus-lined slope where there’s barely a trail to follow sometimes for all the brush overhanging the way, and then back up and over, gently, onto the JF Trail.

It’s the last gentle (if hard to follow and overgrown) up before Clover Spring, and while it is gentle, it is also sweltering. We’re on the ridgeline of a slowly climbing plateau, and I can feel my brain physically cooking in my skull, threatening to boil over and out to… somewhere. There’s a nearby juniper tree that Pineapple steers me to, and it has a perfect indentation purpose-built for me, to get all of me horizontal, out of the sun. While I plan to simply take a few minutes to regulate my body temperature, my body decides it’s sleep time for a half hour. Alright then. At least I wake feeling I can do this, I can make it, I’m gonna be okay.

We push on to the water at Clover Spring, find another juniper to shelter us, but the shade was much better at the last juniper, and where the sun touches our skin it sets us ablaze. I manage to cook and eat a meal for all that, with Pineapple’s help getting water. Slowly, drinking lots and eating more salty snacks, I manage to get my urine back to a healthier color and start feeling better all around.

Still, our break is too short – there’s not enough time to do all the things I want to do, like sleep, record the audioblog, sleep some more. We want to leave at 5p, but getting six liters of water takes some time from the pool that’s present, and we need those liters – it’s 17 miles to the next reliable water.

green, but cool. and at least it’s there.

There’s more climbing after the water, but it seems easier in the cooling evening. We’re in higher spirits now that the sun’s mostly gone, too. 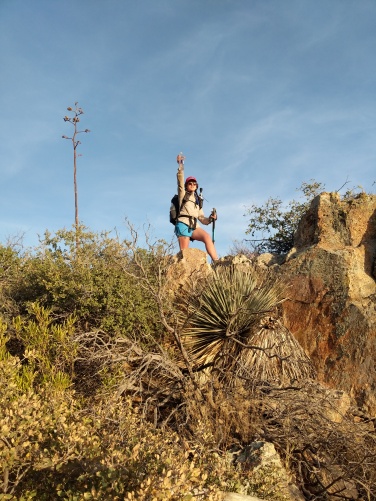 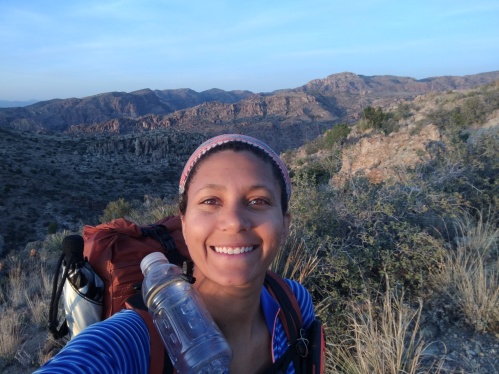 a smile! a real, if vaguely exhausted, smile!

Aaaaand then the sun is actually gone, and we’re about a mile from our intended camp. Whoops. I definitely said it was dark last night at 7:30, but I guess we’re still moving slower than expected. So, uh, I guess it’s night hiking time!

Where my headlamp is bright, Pineapple’s is so, so dim, so it’s a lot of forcing my way through trees brush catclaw and then turning my headlamp about and waiting for her. And where I am firmly ensconced in pants, she’s wearing shorts, so every snag tear rip poke is on skin, not reaching for purchase on fabric. It’s a long, slow, mile where we lose the trail once and have to find it again, and when we finally do make it to the only suitable camp in that entire section of trail, I’m the one doing the consoling. Full circle.

It’s  quiet here, so quiet – so the screeches my stomach makes in its demands for food are loud, but I am much, much too tired to even think about making food right now. I placate my stomach with water and promises that I did better today – even if only marginally – and I’ll do better with food tomorrow.

[1] I’ve actually never heard one rattle before. I saw a couple on the PCT, but both of them were just minding their business, crossing the trail. It sounds different than I expected.

3 thoughts on “Day 2 – Trending to Difficult”