I’m showered and dressed and full of excitement in the morning, even before coffee – Banita, Spesh and I are all headed to Denver Comic Con, the indoor delight that’s our treat to ourselves after two months of working outside. And what a treat it is.

So many sights, sounds, colors, costumes! Kurtanna joins us inside, and with them, we’ve got a pretty solid Archer cosplay going on.

There are all sorts of panels inside, from Nathan Fillion answering questions to non-binary gender representation in fiction to using comics to improve literacy in jails. They’re all great panels, but the one that moves me the most is the Singing Tesla Coil. 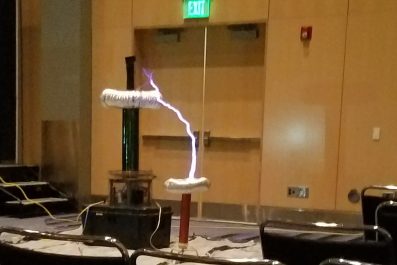 science! sorry for potato – the link above actually shows the singing.

Science and I got along as a kid, and I thought it was cool enough, but it never moved me like the written word and the rest of the humanities did. But in this moment, watching this machine spit lightning, feeling the electricity in the air, and hearing one of my favorite scores from childhood, my eyes are suddenly full and wet and heavy, even as my heart fills with wonder. I’m so involved in the songs the coil plays that I think I’m going to be bereft when it stops, when the music ends, but the performance floats me through the entire day. I can’t help but wonder how different things would’ve been if I had seen this earlier in life, which just leads me to more questions, questions about access and connection and feeling things in your gut, deep inside. We can’t know what we don’t know, but I’m glowing inside knowing that I can still be so profoundly surprised.

I’ve felt guilty about being inside all weekend, and my mind’s been racing about the supposed incompatibility of technology and the outdoors. This supernerd managed to get outside and find fulfillment on long trails; there has to be a way to make similar connections with the outdoors for other people. We run into a booth called the Monster Scouts, who are trying to invest nerds in the outdoors through storylines, community building, and campouts, and I am once again humbled by people with passion and ideas and follow-through. That’s what any comic con is, or at least should be, all about – the passion evinced by people who truly love and care for a thing being shared with others who also love that thing. By the time the con’s finished, I feel rejuvenated already – though not quite ready to go back to work.

Monday is a day of changes – a change of scenery, and a change of haircut. The humidity and the threat of deer ticks has convinced me to go back to tinyfro for the summer, and after an empowering weekend of passion and being around other brown people, I’m more torn up about seeing it go than I thought I would be. But it’ll probably grow back. Probably.

We also have a helluva time in Boulder, hanging out with close friends and staying up way past car-camper midnight.

The fourth of July is a rough day for me – marked by barbecues and picnics and flags everywhere, it asks me to celebrate a nation that would take healthcare from four out of every ten children to save money, that thinks the state-sanctioned murder of unarmed or law-abiding people is an acceptable part of a free society, and that chose a man who cares for nothing but himself for a position that sets the social and political course of the nation. I wrestle with all of this as we spend time at a local reservoir.

caught in the middle between smiling and not smiling

Unable to urge myself into water crowded with people and clogged by boats, I spend my time reading Trace: Memory, History, Race, and the American Landscape instead. It eases my misgivings, and the lack of jingoism on display at the reservoir and, later, at a friend’s barbecue makes it easier to enjoy the fireworks.

We actually get up and go to work the next day – the Center is nearby, so we check in, have a couple of impromptu meetings, do more work than we intend to do. Spesh heads off from there to Salida to get away and tape The Trail Show; I stay around, hang out with my friend-hosts, watch Moana and play League of Legends until late in the evening.

I sleep for ten hours – how luxurious! – then spend the rest of the light hours sleeping on and off. I try to inspire myself to get up, but it’s only an hour or so of being awake before I’m back down, exhausted to the point where I wake up after a nap to find drool on my pillow – a first for me. Sleep is how my body adjusts, and moving from about 1000 feet in Missouri to 5000 feet in Colorado has taken its toll. It takes a few days to adjust to the change in air density going down in elevation, but a few weeks to properly settle in once you’ve gone back up. My friend Litton manages to get me out of bed with promises of food, friends, whisky, and sunsets – and delivers on all of them in spades.

Consciousness is easier on Friday, though I while it away with the art form that is the game Life Is Strange and various Netflixery. I wonder at my laziness – but hey, I’m on vacation. At least, for now.

Our last day of proper vacation is full of folk, as it should be – Stumbling Norweigan and Honey Bee, PCT hikers and Stampede Pass trail magic providers, are in town for some hiking (and a wedding I guess); and we spend the morning and the afternoon showing them the tastier points of gastronomy in the Boulder area. After a nap for Spesh and more agonizing gaming for me, we have dinner and drinks with D&A, another Traveling Trainer team who just so happens to be in town, and then, after an REI stop, we spend the rest of the evening hanging with Stumbling Norwegian and Honey Bee.

Sunday it feels like work again, even though nothing much has changed, even though we’re inside, even though we’re not really on the road again until at least tomorrow. Still, we’re working on shot lists, writing emails, and catching up on life outside of inside. We’re back at it tomorrow, and this vacation’s done it’s job: I’m ready for what comes next.