We’re early into Grand Forks for a scheduled workday, settle into Bully Brew Coffee near enough to the university that I think there should be more people – but then, it’s technically summer. Technically. The weather doesn’t want to seem to cooperate, clouding over and just… staying that way. Not raining, but not clearing off, either. Well. That’s one way to get welcomed back to the Midwest, I guess.

We while away the hours with work, so much work that we’ve left undone over the last days of traveling moving being freedom, so much that we spend the entire day and then some in the coffee shop. The folks working seem not to care, we keep buying, they keep supplying our caffeine fixes. We haven’t quite gotten the work balance figured out yet, so Spesh is done earlier than me; he scouts campsites nearby, and whaddayaknow, there’s one here in the city. Well, technically there in the city – it’s just across the state line in Minnesota. We’ll be sleeping in our sixth state tonight.

By the time we make our way over there, it feels like it should be nightfall, nearly 9pm, but the sun is lingering, peeking through the clouds, wanting to spend more time with us. We go for a stroll in its fading light, along the paved and strangely-regimented lanes of the campground, and then down a bike path that runs along the riverside. We tap the bridge to North Dakota and turn around, only to discover that the geometric configuration of the roads are for a reason: we’re in a neighborhood that was flooded out in 1996. None of the houses were salvageable, and the location is so close to the river that preventing this area from flooding again would likely be near-impossible – so instead of letting it languish in disuse, it’s a State Recreation Area now. It doesn’t give people back their homes, but at least something positive came of it.

The sun hangs out until after 10, until I’m well and thoroughly disoriented. Light and dark feel almost arbitrary as I settle into bed, and I’m not sure that bodes well for trying to set a sleep schedule for myself in the coming weeks. I’ll find out the hard way, I’m sure.

In the morning, the sun is, of course, merrily shining, but it does feel a little harder to get out of bed – all that partying with the sun on the other end, I guess1. But it’s another day of chores – laundry, car wash, food shopping, oh my – before we head out to Turtle River State Park, to set up in plenty of time before our first engagement on Thursday.

It’s not too far from Grand Forks, about 20 miles out or so, forest nestled among fields. We drive up just as the Park Manager is leaving for the day, have a lovely conversation, get much more confident about the weeekend. The park has given us a walk-in site that’s tucked away from the road, away from other sites, and we’re grateful – we know we won’t be alone for long, it being Memorial Day Weekend and all.

The next morning it’s out for a run and a shower in the deliciously warm stalls the park has provided, then into shiny new dress pants and never-worn schfancy polos to pretend show that we’re all official. Agency trainings make me anxious; I know what I’m talking about, but so does everyone else – or such is my assumption. I’m incredibly self-conscious, shirt’s too big hair’s too big, but it is what it is. The rest is just making sure my mouthpieces stay moving for about an hour, and remembering to look like a responsible adult2 when we finally get to introduce ourselves to the Interpretive Naturalist.

It goes well, better than I thought for our first presentation, which is on me, not Spesh. We debrief and cook and settle into bed, knowing that boothing tomorrow will be easier – and it is, though not for want of obstacles. The apparently infamous North Dakota wind and the apparent nonsensical organization of our materials conspire to make our booth setup quite the challenge; it takes about an hour for everything to get settled. Then, surprisingly, it’s over, over much more quickly than I anticipated, and we’re off for some last-minute prep before bed.

Bed being the technical term for attempting sleep, but being woken every hour by underage drunkies who “don’t give a fuck” that there’re two young kids in the site beside them. We’re across the walk-ins from them, and they manage to penetrate my earplugs with alarming consistency. Screaming at the top of one’s lungs will do that, I suppose. They’re up until 5am, when it’s almost useless to try to go back to sleep. Almost.

I’m exhausted but try to get hyped in the morning – working with kids requires a lot of hype – and we’re surprised that most of the kids are bitty-bitty. Under five bitty. So it’s playing silly games and trying to keep all of them and the two teenagers excited, which is a losing battle; everyone starts to get antsy, us included, and we put a nice neat little bow on things after an hour.

I think about taking a nap, but I want to make sure everything’s perfect for our amphitheater program this evening, which requires writing and scripting and going over things repeatedly with Spesh until we both feel like we’ve got it. I’m nearly in nap mode when the Interpretive Naturalist walks up with a weather radar on her phone – well that looks like a storm front coming through. Arriving right in the middle of our amphitheater program. Well, she’s the boss, we’ll do as she likes – so the show must go on, though we prep with rain jackets and coats to protect against the wind.

We get about halfway through when the wind kicks up even further than usual, dropping the temperature for the girl scout troup sitting in shorts and tees in the front row, and all of them run giggling and screeching for the warmth of camp. Everyone else seems of a mind to follow them, sooo I guess this program is over. It feels pretty anticlimatic, but I guess that’s the way things go sometimes. We do chat with a camper for a while longer, and then with the Interpretive Naturalist and her Assistant a while after that and then it’s just… over. We’re done with our first set of events.

We ride off back into the grey and cold and maybe eventually wet, though the rain never really makes an appearance. I feel like there should maybe be something more to/of/by/around it, but nope: that’s really it. Well, that and a brief morning of picture taking, trash collecting, and mountain biker chatting near the Civilian Conservation Corps pavilion. 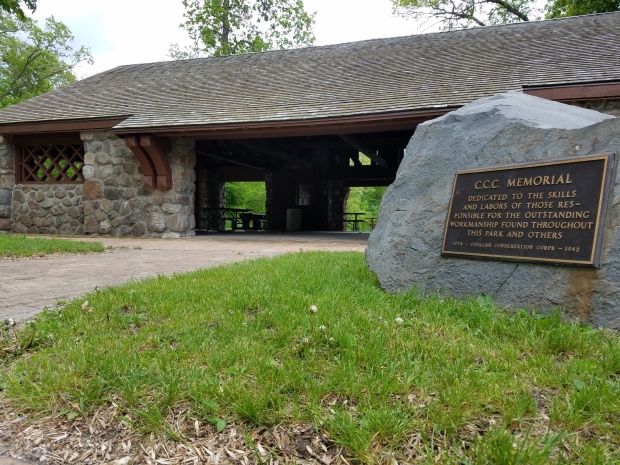 The Civilian Conservation Corps did a lot of work in the area. This building used to be a bathhouse. There are fire scars on the roof where, I presume, the boiler used to be.

A big ol’ dinosaur snapping turtle, moss on its shell and everything, crawls out into the road as we’re off, bidding us farewell and/or looking for a finger or toe for the road. Our very first Turtle in Turtle River State Park! Apparently, they hang out on the road on cooler days because it gets most of the sun. If I were a dinosaur turtle, I’d probably do the same thing.

And then we’re off, south, headed towards Fargo, back and forth across the North Dakota-Minnesota border.

It being Memorial Day Weekend, I head off any issue with getting a campsite and reserve for the Buffalo River Campground in Minnesota – Fargo’s yet another town straddling a border, and Buffalo River is about 25-odd minutes away. But first, it’s a burger dinner and a quick movie3 to celebrate surviving our first solo event.

The campground is full and waiting our arrival once the movie’s finished; we get some curious neighbors who ask us animated questions about the car, and who think they’ll try to meet us for our next event – I hope they do. Settling into sleep is easier than I think it’ll be; it’s our first quiet night with all this company, and it reminds me of amiable nights on the PCT, feeling safe and secure, anonymous among all these bodies in their tents and RVs. Tomorrow is a workday, a full café day, catching up on this that and everything – but for now, it’s just the peace of Spesh’s presence, my earplugs, and my beloved down sleeping bag.

So getting photos is definitely something I belatedly noticed I didn’t do, and which I’m working on more for this week – I’ll have some beauts for you come next Thursday.

[1] Don’t know how it’s so energetic this early. Must be all that burning hydrogen.

[2] oh god oh god what does that even look like

[3] Guardians of the Galaxy, vol. 2: enjoyable, but confusing if you miss the first five minutes.