The night is quiet, so quiet – this has to be the quietest place I’ve ever been. The deer I spooked earlier going to pee seemed strangely loud, but things have settled in for the evening – myself included – and it’s so quiet that my eyelashes scraping against my sleeping bag are nails on a chalkboard, and my heart is thunder raging in my chest. There’s so little sound that I have no reference for what’s loud or quiet, and, so disoriented, it’s less sleeping than it is my brain deciding that the input not matching expectations requires a hard reset. In the morning, I’m well and truly ready to leave the silence of the evening behind, and my footsteps are loud as I make my way down the hill to Chinook Pass.

There’s a nice hiker bridge over Highway 410 – and a nice spot where four tents seem cozy in the morning light. Womp womp. I wonder if it was as still, as silent down here. Would the others rustling in their tents have driven me mad? I wonder how they managed. It’s a thought that makes me vaguely uncomfortable as I make my way up to Sheep Lake.

Climb climb climb to Sheep Lake, where yet another tent is set up – how many people am I unknowingly just ahead of, just behind?

So much climbing – it shouldn’t be this hard, I did more climbing yesterday – but maybe that’s why it’s hard. 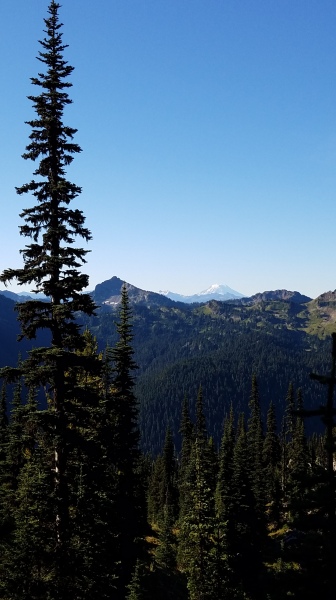 Can still see Adams from higher up, though – I walked right beside that mountain!

Looking back to Chinook. This whole area should be called The Quiet.

Finally, finally, I’m out of the valley and up and around to… more uppy-downy. More uppy than downy. Ugh. Legs, y u no work?

I’m dragging today, but Rainier is my constant companion off to the west, moving southward, cheerily glinting in the sun.

dat glacier tho. I’d like to climb it one day. 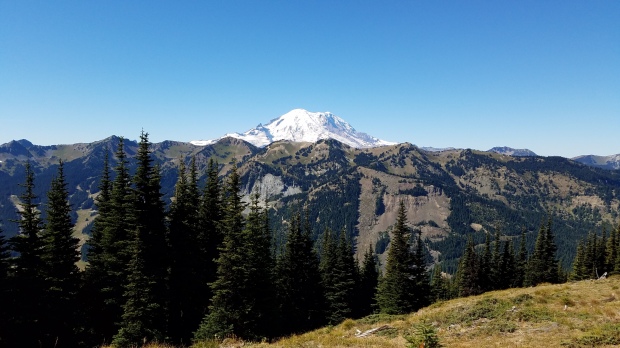 A dayhiker out for a walk breaks up the uppy-downy-monotony, asks if I’m a thruhiker. …Yes? He carries candy for thruhikers, and with the injection of sweet, sweet sugar into my system, EVERYTHING IS AWESOME. THE MOUNTAIN IS AWESOME, THE HIKE IS AWESOME, THE HUNTERS ARE okay I guess. I see a couple of them wandering the trail, too, looking for those elusive elk.

There’s a nice piped spring coming out of the mountain not far after, and while I’m struggling down the steep slope to get to it, CAT goes a-wanderin’ by above me. He says he’d stop, but he’s got a strict time schedule he keeps. I sit, eat some more, ponder a while, and end up passing him pretty much immediately after I start walking again. Well. That’s okay.

After a ton of down, there’s more up – sidehilling on the left, for once, rather than on the right. My body’s gotten mostly used to the trail having a slight slope up to the right, and is quite confused about what to do when the trail slopes up to the left. Well, confused beyond the whole “making its confusion known” part. It makes for more slow-going.

Slow, slow, slow – I’m not making miles and I feel it. I’m just hurting today. I have to forgive myself, since I’m doing everything I can: I’ve been better about taking breaks, and eating the right amount, and and and. I’m still going to make it to the Mike Ulrich cabin – I’m looking forward to sleeping inside tonight. I make it through the last few bumps along the way by singing whatever comes to mind – which, it turns out, is mostly sea shanties1.

Then, at last! What light through yonder meadow breaks? It is the north, and the Mike Urich cabin is the sun! 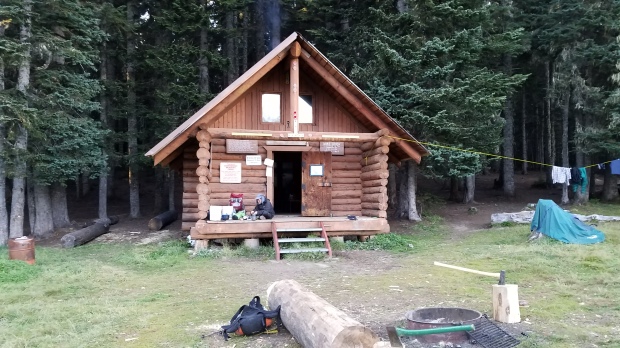 And so many hikers, and HOLY SHIT KATIE. LIKE KATIE FROM DAY 1 KATIE. She has a trail name now, but I lose it in the excitement of catching up with her. Her group’s going a bit farther, so they pull chocks pretty quick. I’m trying to decide whether or not I’m staying, wander into the cabin to feel things out.

The cabin is severely occupied, not only by thruhikers, but also by… firefighters? A bunch of first responders from 9/11 apparently come occupy this cabin around that time every year to magic hikers and party away their memories. It’s eminently understandable, but I didn’t sign up for a party. My decision is made for me when some of the occupants – hikers? firefighters? – try to tell me that I shouldn’t go, that there are mountain lions in the trees, waiting to pounce on me from 200 feet in the air. I’ll never know what hit me.

Well. At least I’ll have gotten warmed by the fire before I was murdered by a gravity-defying cat. I bid them a smirking goodbye with little fanfare, eye my maps to try to see what’s feasible before dark.

I’ve heard tell of a site nearby, on a gravel road, that’s supposed to have a rad view of Rainier. Maybe Katie and friends are there. So it’s across roads and lots of gravel up a mile and a half to what turns out to be a less-than-optimal single pad. But does it have the view?

Not only dat view, but service! I watch the sun set while I set up, chat with Spesh, reserve myself a room at Snoqualmie Pass in a couple of days for charging things/laundering things/showering self, mostly because I have to charge my battery pack. I’m almost tapped for energy, and the prospect of a warm and dry inside to sleep in seems pretty great. I’m also preeeetty sure I can find other hikers to help me fill it. Probably. Hopefully. I eat, curl up, cross my fingers that the process of falling asleep will be much better than last night. I’m out before I know what hit me.

[1] I’m like 80% certain this has come up, but if you don’t know, I was in a renaissance-style acapella group for a while. I tend to revert to those songs most often, because I think my voice suits the folkish style more than other songs. (Which is probably a sort of renaissance-oriented feedback loop – I sing them more often, so my voice remembers how to do those things and sounds better, so I sing them more often…)

(P.S. I had a load of bits and bobs to take care of before I went home to see my family for the week, and then I was traveling all day today. It’s still 10pm Mountain time, so I’m counting this as a Wednesday win. Another post tomorrow afternoon!)