We’re up pretty early, earlier than Seamus needs to be, so he can take me back to Cascade Locks. I’m wistful about leaving – Seamus has this view of the world that cuts through a lot of the bullshit, and his honesty has this way of speeding me to conclusions I’ve nearly arrived at myself. He’s always a breath of fresh air, and my time with Alice and him has been a healing one. Still, I’ve one more state to walk, and it’s time to get to chores so I can get to walking.

We arrive at the Cascade Locks post office just before I think it opens – but it opens at 8:30, not 8. Womp womp. Seamus offers to stick around, but it’s a half hour – I’ll manage. Then it’s hugs and sending him on his way to work and prepping boxes to send out in the common area, socks and shoes and sleeping bag stuffed in tight in preparation for insta-sending once I get up to the counter. It’s also nice to be at the front of the line, given that I know how many hikers are still in town for the same reason I am. The line builds and builds behind me, as I expect, but even having to go to the counter twice I’m in and out relatively quickly.

I text with Pineapple, and we meet at the Cascade Inn’s diner that’s just down the street, where I pick at my food and feel heartsick. It’s the last time we think we’ll see each other – I’m trying to make it before October 1st, and she and Matt are trying to make it before the 6th, so they’re trying to do fewer miles. It’s hard to say goodbye yet again – so many goodbyes, and they’ve only barely started. My body, too, is rejecting the whole situation, and takes its displeasure out on me in the bathroom.

It’s raining, so I ask if I can sort my resupply in here, since there are still a ton of empty booths; the staff is obliging, so I try to wait out the rain until I can’t wait anymore. It’s 11am, and I’m trying to make at least 20 today, so no more excuses. This is what you bought rain gear for.

So it’s back to where I left the trail and onwards a couple of tenths to the Bridge of the Gods. 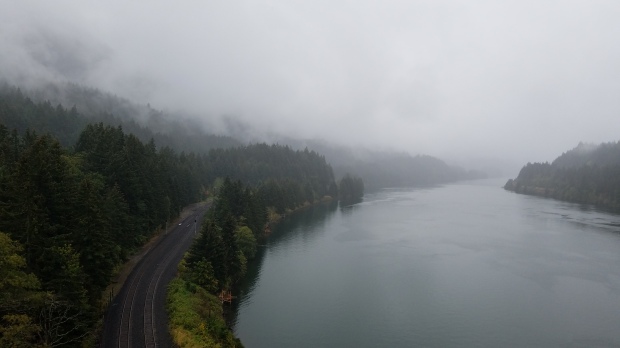 The bridge itself is as sketch of a walk as I’ve been told, although with the weather and the time, the traffic’s not so bad.

This is the view down, though.

The toll folk asked me to walk against the traffic, which is safest anyway, but the Washington sign is in the other lane. I wait for a break in the traffic, then sneak over for some quick selfies. 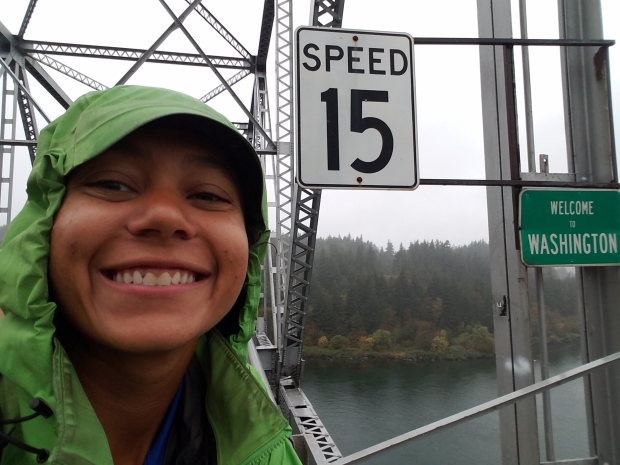 And then, just like that, I’m IN WASHINGTON OMG HOW DID THIS HAPPEN. This feels particularly momentous, and I wish I could share it with someone.

Of course, the Columbia River sits in the Columbia River Valley, so once I’ve crossed it, it’s up she goes again. Up up up, through the rain. I throw on Democracy Now, the first real-news podcast I’ve listened to on trail, to hear what’s going on at Standing Rock with the Dakota Access Pipeline. As I hear more and more about it, the rain comes to suit my mood.

I only see one other hiker as I’m walking, although I know there have to be more of us out in this. Or maybe no one wants to be out in this cloudy drizzle. Why deal with the wet if it’s supposed to clear off tomorrow for the next several days? But I actually think it’s kind of nice – or, at least, different. I get to test my mileage and my mettle under different conditions, get to know myself a little better. Get a little more comfortable with being lonely.

The afternoon progresses into early evening; a NoBo passes me, along with two SoBos who interrogate me about nearby camp spots. For my part, I’ve made it out of the valley, and while I don’t quite think I’m going to make 20 miles like I’d hoped, I decide I can make it to Rock Creek before dark. So it’s down tiny bump down down down to Rock Creek.

Within a quarter mile of the creek, five tents dot the trail’s edge; each spot could fit multiple tents, but each tent is placed as to make that impossible. Well then. I make it to within a stone’s throw of the crossing before I find a spot of my own – directly under a dead tree – and a spot that I could share, but it would be stupidly close to another pair of tents. Well then. I don’t know how wet affects dead trees, but I’mma try not to affect the quality of sleep these folks are gonna get, despite being camped so close to them. I feel like an asshole for doing it, but I also know I don’t feel like waking up dead1.

I decide not to cook until morning, so as to stop making noise sooner rather than later – a brief apology in addition to the verbal apology I give the two in the tents. Settling in, I find my  3° bag is magical and fluffy, so fluffy, and I am suddenly so, so tired. I’m chilled to my bones but it’s warm in my bag, and falling asleep is probably easier than it should be.

[1] I’m learning via my posts that this was one of my most constant worries on trail, despite not really having had trouble with falling dead trees but once. Still, when once is all it takes to become a pancake in the night, I don’t know if or how I’m going to stop worrying about it, either. Maybe do more desert camping. Probably do more desert camping.