It’s a cold, wet night – I burrow down into my bag, but it only helps so much, and I’m grateful that my 3° bag is headed to meet me. Not that it’ll be warm if I’m not able to keep it dry, which is not so difficult while it’s in my backpack so much as difficult at load-in/load-out time. I wake a couple of times thinking the bag’s gotten wet somehow, but it’s just the cold – my Mountain Hardwear tent, despite the wet, is holding strong. My leg is pretty annoyed by the bite/sting/whatever though, forcing me awake to try to make it comfortable. At 6, it’s still too cold to leave my cocoon, but at 6:30 I have no more excuses. I start my coffee and the sad business of putting on cold, damp clothing.

Being cold is my least favorite sensation in the world, but at least there are only 2.5 miles to Timberline Lodge. 2.5 miles of up, but only 2.5. Half of it’s sand and dodging dayhikers who tease me about my impending breakfast, but the other half is Mount Hood, so that’s nice. 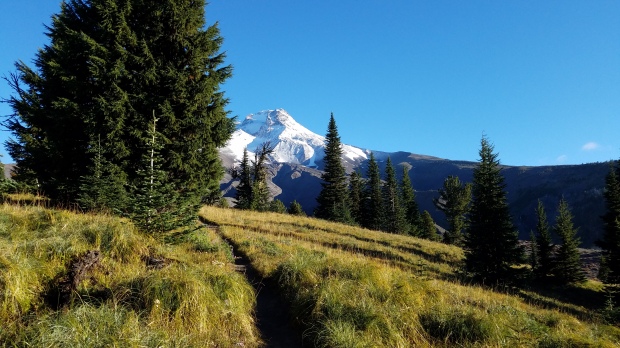 I’m vaguely aware that this is likely the only sun I’ll see today – I should really take this opportunity to dry my stuff – but dat breakfast is calling, so I’m just going to have to deal with the wet. 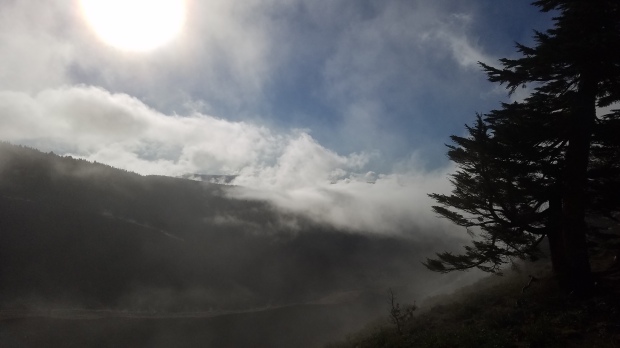 And then, day use area confusing trails, and the lodge in the distance. I head for the asphalt path, as it seems the easiest to track my way back to, and run down it, to the shock of the dayhikers.

Yoda’s outside; I’d stop to chat, I say, but breakfast. I’ll catch her later. Pineapple’s inside, though, so I get to stuff my face and chat with her and meet Matt before he then she leaves me for laundry. I learn from MAGA that a bunch of people have been stung like I was last night – and it is a sting, from some kind of wasp that’s sassy over the weather finally turning colder. Nice to know, even if my leg does throb in sympathy for the others.

After breakfast, it’s the Wy’East store for my package and a tea, then I take over a table while I charge stuff and dry other stuff. 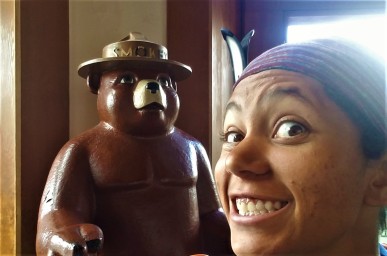 I’m vaguely aware that I’m stalling – I don’t want to go back out into the cold – but eventually I’m gonna have to move on out. Yoda helps me with that whole stalling thing, and we chat for about an hour, just about how the trail’s been, how we’ve felt since we saw each other last. Turns out, that was in Tahoe, so we have a lot to talk about. 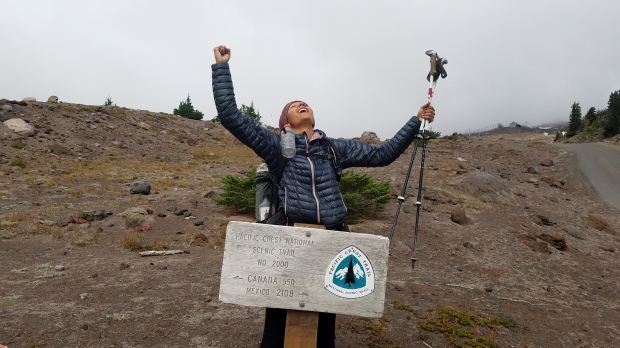 I’m not even a mile away from the lodge before I remember all this other stuff I should’ve done during my extended break: calling people, paying bills, frontcountry stuff. I take care of it on trail, while dodging dayhikers, when I could have been warm and dry doing it. Womp womp. 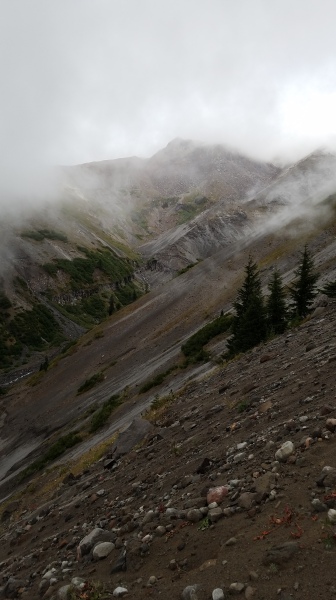 There’s so much downhill from here, which means there’s a ton of yielding to dayhikers as they come up the hill. It’s very much WALKWALKWALKWALK stop. wait. chill. try not to tap foot in impatienceWALKWALKWALKWALKstop. I feel like I’m getting nowhere, and the weather’s not helping. Still, the hikers themselves are nice, and more hikers means more impetus to protect the wilderness. I’ll survive. 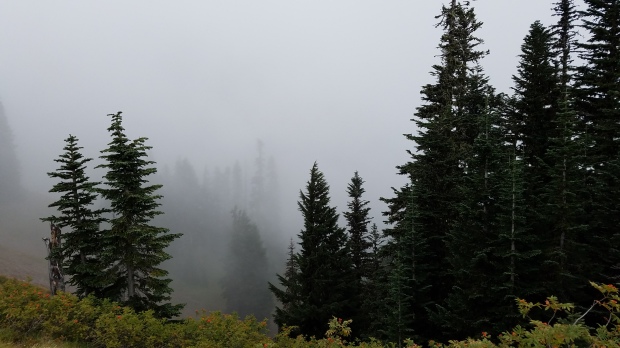 I run into Popeye and Peru on the first downhill – good to see them again! – and we talk blogging for a bit. Their story is pretty rad: Popeye’s bonding with his daughter Peru for the first time, and they’re blogging about their experiences of the trail and each other. He’s blogging in English, and she’s blogging in Spanish, and they’re not allowed to read each other’s posts until it’s over and done with. Hiking the PCT is a pretty cool way to bond generally, let alone for the first time, and it seems like it’s been a cool experience for the both of them.

As we’re walking, Peru gets stung – or ostensibly does, because she can’t find the damn thing that stung her, either. I tell them about my experience, which seems to comfort them somewhat re: snakebites, but they’re not sure if Peru is allergic to bees. They decide to stop, sit for a minutes, see how it goes; I offer to stay, but Popeye waves me on. I hope everything’ll turn out alright. 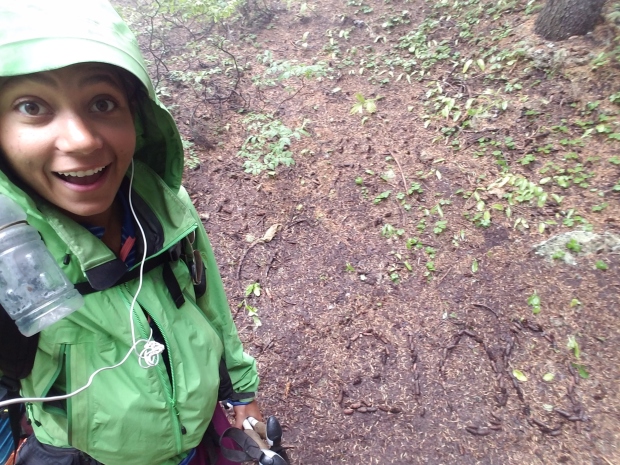 Trying to avoid the wet means I don’t stop long, and it’s back to meandering through a cloud-drenched wilderness. Maybe it’s navigating these rocky downward slopes, maybe it’s the waterfalls, maybe it’s the cold getting to my brain, but today just feels wild, even if I’ve seen more humans today than I’ve seen in a while. 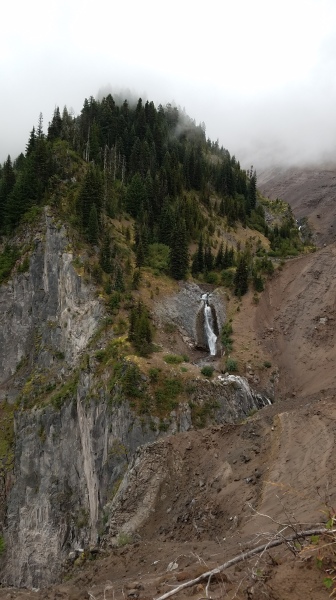 I took a moment to appreciate the irony of cooing over falling water when I was feeling a little done with the dampness of the day.

I figure out that I’ve missed the Ramona Falls side trail a quarter of a mile after I should have turned, but since the PCT and the side trail are the same length, I decide to go back for it. Who knows if I’ll ever come back here – the weather is making me wistfully aware that my time on the PCT is drawing to a close. I’m going to try to squeeze every experience I can out of this.

I get there and find I made the right decision. 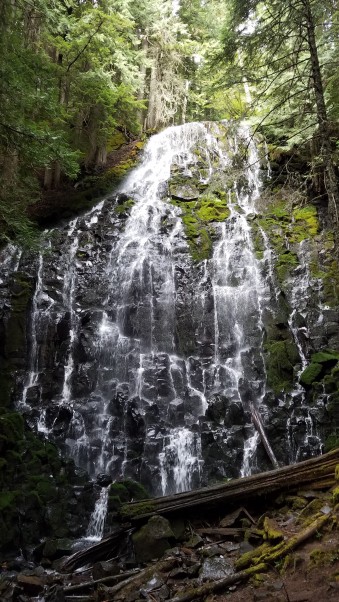 There are so many people there, but despite their presence it feels like it’s just me and the falls, having a moment. Looking around, I can tell who the thruhikers are: they are quiet, still, watchful, while everyone else seems to engender ripples of excited chaos around them. I don’t begrudge them their happiness, and I wish that I, too, had more time to spend here. Soon, entirely too soon, I’m up and walking again.

The Ramona Falls alternate, I find, is worth it for more than just the Falls; the trail through here is more the magical moss-covered Oregon I’d been expecting from blogs and pictures. 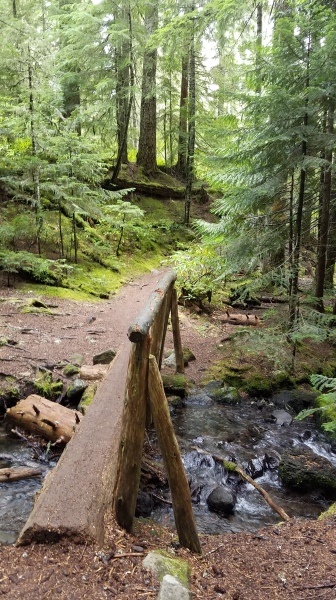 The alternate reconnects with the PCT, at the base of what feels like my first real Oregon up. Huffle puffle, switchback after switchback – although I’m thankful there are switchbacks; such have been rare in the last 400 miles. I’m nearly to the top when I come across two dayhikers trying to make it back to Timberline Lodge before dark. They’ve got nearly 13 miles of mostly uphill to do, and only about 3.5 hours in which to do it. Weeeell… I hope they have headlamps.

When I make it to the top-top, Oregon celebrates with me by giving me a wee bit of sun. 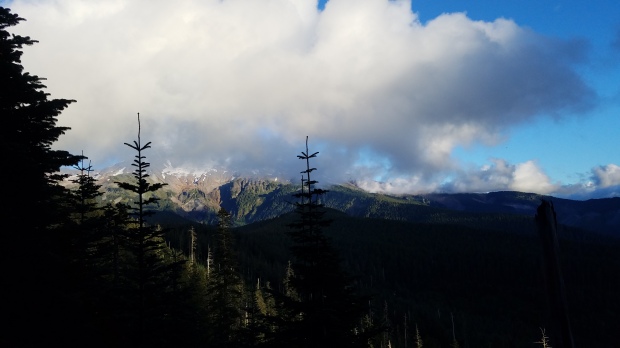 Well, there *was* a view of Hood a second ago.

I catch up to a hiker who I discover is MAGA, and while I’m too happy with what the day has given me to engage in any real political talk1, we have a pleasant conversation about the Appalachian Trail and hiking and the hikers we’ve met along the way. He talks about MAGA as a character who is not him – contrary to the trail name = true name proposition that feels good to a lot of hikers. He tries to poke the Zuulbear, describing himself as an anarchocapitalist, and while I’m not sure those two things go together literally at all and am willing to argue the point eventually, I’m also not taking the bait, particularly since he’s going further than I am tonight.

I remember it’s Labor Day weekend when the spot I was trying to go to – which is right by a road – is full to bursting, so I have to move it on along to the next site. This new site has too many people in it too, but it’s getting dark, and I’m not walking another three miles waiting for the profile to open up. I end up putting my tent in the best spot available, which happens to be on a strange hump that is either going to be super comfortable or super not-comfortable. Win some, lose some, I guess.

There are four other people in the site: Hobbes, an Oregon-sectioning NoBo; David, a thru NoBo; and a not-white father and son who are doing Hood to the Bridge of the Gods over the weekend. The first two seem to be ignoring the second two, but the second two are lovely, and it’s nice to chat with them, even if I’m too tired to engage like I want to.

Dark falls quickly, and as I cook in my vestibule I hope for no bears, no rain, and no midnight angry-body awakenings. And if the weather holds, I hope to wake to mostly dry things, too.