I wake super early in the morning, go back to sleep. I’m then up at 8 – that’s probably as late as my body’s gonna let me sleep, and besides, I have stuff to do today. Like take another shower.

After the shower, it’s fighting through language barriers and asking for late checkout to get laundry done at the hotel – eventually, I learn, there’s detergent for sale at the front desk, so eventually both my clothes and I are clean. Then it’s off to the Big Bear Diner for breakfast, and trying to figure out where we’re sleeping tonight.

A lovely (and huge!) breakfast later, Spesh’s local friend Daniel has offered to put us up for the evening, and will hunt us down later in the day, after he’s off work. So it’s off to the grocery store to resupply, and into the Starbucks seating area to get everything sorted, under the watchful/suspicious eyes of the local coffee-drinking seniors.

Hauling everything to the nearest post office is harder work than I think it will be, but sitting awkwardly on the post office floor while people come and go, hoping I won’t get kicked out, feels arguably harder. I get a lot of curious folks asking about what on earth I’m doing, and a lot of surprised looks when Spesh inevitably tells them that I’m doing the hike by myself. I don’t know why that’s so strange to people. It already feels like all I’ve ever known.

We go to Mountain Supply, a locally owned gear store, where I get the Aqua Mira I need, talk hiking and gear with the workers, sort through stickers for Spesh to take home when he goes tomorrow. We linger until the place closes, then linger on the ostensibly-public grass side-of-the-road to sit until Daniel gets there. I go for a walk to stretch, catch Pokemon, think about the anger of yesterday. I come back, apologize to Spesh, explain myself, insofar as much as I can communicate how I was feeling. Apparently I’m dealing with some abandonment issues, and it’s the end of August. I’ve got a month – or less – before the snows come1. I’m scared I won’t finish. But there’s nothing for that except to keep walking. And keep walking I will. Tomorrow.

Daniel picks us up and whisks us off to the grocery store to buy provisions for dinner. Wandering through the produce, Spesh finds a tiny pineapple, which I immediately text a larger Pineapple about. 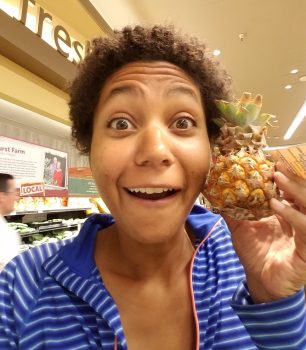 He jokes that I should buy it, take pictures of it in random places. I can’t see anything wrong with this plan – sure, I’ll carry some extra weight for a gag. And maybe I’ll catch Pineapple the human, and we can eat it together in celebration.

Then it’s a tour of the parts of Bend we haven’t seen yet on the way to Daniel’s place, and, once we get there, a hearty pasta dinner. I’m still not tired of pasta, still not tired of mac and cheese. I bet I could eat it forever. Then the gents drag a mattress in from the garage for us to sleep on in the living room, and while I don’t feel particularly tired when I go to lie down, I’m out like a light.

[1] More than one of my friends has gotten stopped in the third week of September by snow.