I wake to a deep-seated feeling of nervousness. It’s not that I’m hurting from yesterday – I’m not, not really, not at the moment. But I wasn’t hurting yesterday morning, either, and knowing you’re in for some pain is kind of off-putting. So when Junaid sets up the stove, makes coffee, reheats the leftover korma, I’m kind of glad for the delay. 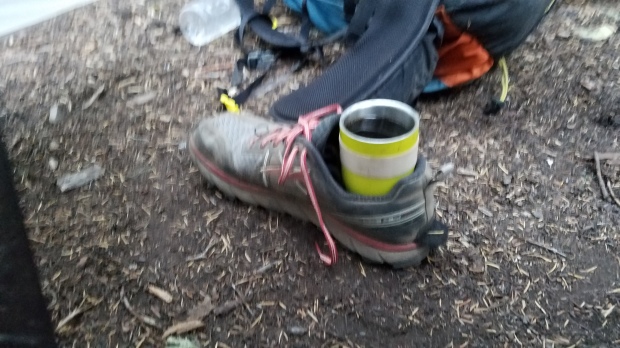 Much harder to spill this way.

Eventually, though, we can’t put it off anymore, so we gingerly, tentatively, set off down the trail. I’m clad in puffy, hat, and gloves this time, just for good measure. Heavens forfend another muscle freeze up on the other side, do this to me again.

The pain has settled firmly into my hip, which feels like it’s going to catch fire at any moment; luckily, most of the morning involves walking downhill, so by the time my hip’s ready to start yelling, it’s warm out again.

We pass by enormous lava rocks, larger than me – I’m coming to love it when nature makes me feel so small.

As we continue to make our way down, I’m kind of amazed at how much water there is in this section. Nameless ponds, Desane Lake, South Lake, Mac Lake, Horseshoe Lake. Most of the sources are lakes, unfortunately, so it’s not as easy to collect, but we also don’t have to haul water so far, either. We almost stop at Island Lake for lunch:

We opt to push at the last moment for Dumbell Lake, where there’s a nice tentspot overlooking the lake. There’s a family with a small dog out for a… day hike? Weekend? It’s hard to tell from their packs, but I’m pretty sure you’re not supposed to have dogs in Wilderness areas1. I eat and try not to judge, though I get distracted by talk of my hip, of where we’re going to part ways. Spesh doesn’t really have any desire to hike north of Mackenzie Pass – there’s apparently a lot of lava rock in that area, and it’ll be harder to catch a ride to Bend – where he’s flying out of – from Santiam. Plus, he wants to have a zero with me in Bend, if I’m willing. I say I’ll think about it. Probably for the best, given my hip and all, but we’ll see how I feel.

The next water source – a stream, finally! – is cold and clear, and we sit for a long while; I collect, soak my feet, find a disposable razor in the water that’s been there for goodness knows how long. Butterscotch rolls up; I tell him about my hip, and in that joyful way he has, he talks about how it was probably a pinched nerve – he pinched one earlier in the hike, and his descriptions of it lead me to believe that’s what’s going on with me. I tell him I’m worried that the pain’s not gone yet; he tells me it took him three days to fully recover. I don’t think he quite realizes how much of a weight he’s taken off of my shoulders, but he’s happy to have helped, nonetheless. We talk about campspots; he talks about going to Sisters Mirror Lake, maybe a little farther, and that’s our plan, too. I hope to get to chill with him this evening.

Then it’s into an unexpected burn, with mountainous views, and lots of southbounders who don’t even acknowledge our presence as they pass by. They have places to be, I guess. Or they’re just tired of the talkative northbounders.

Somewhere in the burn, Spesh passes me, wanting to stretch his legs after my wibble-wobbling all day; he’s been away for several minutes when I trip solidly, yelp, go down fucking hard on my sore hip. A flash of stupid amounts pain; I’m crying again, though I think it’s more fear than anything else. Spesh is too far ahead to have heard my cries, and I just sit there for a minute, feel everything out. I’m so twisted up that I have to take my pack off to get anywhere near being vertical again, but eventually, I pick myself up, dust myself off, keep walking – tentatively, at first, but with more confidence as time goes on. I’m thoroughly, irrationally annoyed with Spesh for leaving injured me by my lonesome, but grimly satisfied that I was able to take care of myself. When I catch him – he stopped for a break – I’m a bit sharper than I need to be when I tell him what happened, but it’s easier to let it go once I get it off my chest.

The burn drags on, but stops abruptly, and just out of the burn is the junction for the Elk Lake Resort. A lot of folks stop there to resupply, eat burgers, but it’s a Saturday, and like to be crowded. Besides, my resupply package is at Big Lake Youth Camp, and I’ll probably go into Bend with Spesh. I do run into a couple of folks I hadn’t seen since Tehachapi at the northern Elk Lake trail junction. Crazy how the PCT be like it is.

It’s a climb just past the northern junction, hup one, hup two – but since my hip decides to cut me a break it’s easier than I think it will be. And then – after greeting Happy Trails and a mother-daughter out for the weekend – it’s down, down to Sisters Mirror Lake. 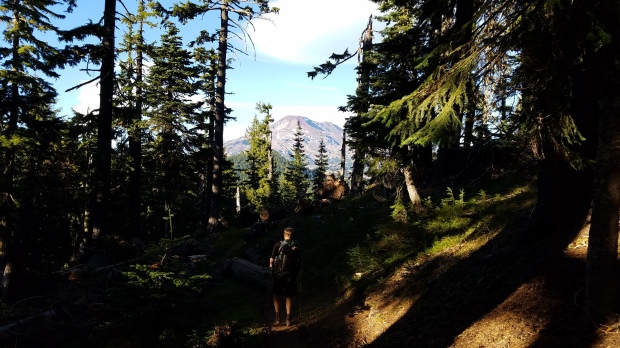 The lake itself is beautiful, placid, and quite marshy at the far end. We think about stopping, it’s so nice: 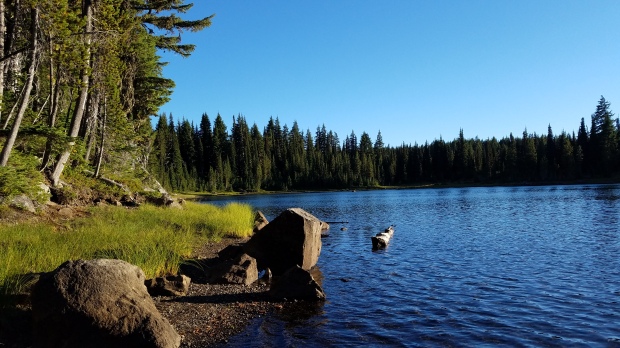 But we think we can make it a bit further.

After Sisters Mirror, the trail opens up a bit into the Wikiup Plain, giving us awesome views of South Sister.

Those lenticular clouds tho

Walking through plains is such a welcome change from walking in the woods – I open up my stride, and am contented when my hip allows me to stretch my legs. It’s the flat, I think – it’s not entirely flat through here, but it’s also not asking me to stress myself out with ups and downs. It’s a lovely evening, even before the sun starts to set and throw color everywhere. 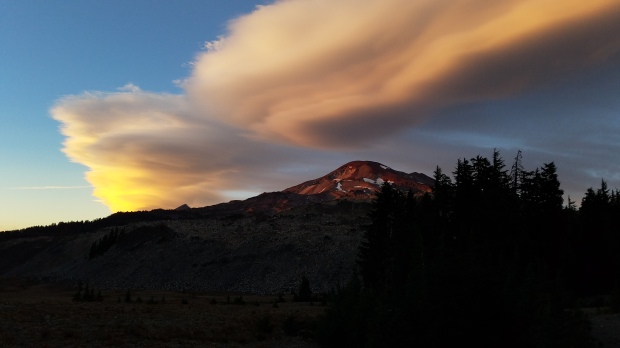 There’s a nice stand of trees at the Devil’s Lake Trail junction, so we decide to call it an evening there. It takes a bit of hunting, but we find a nice spot that’s mostly out of the wind – although it’s quite concealed, so I don’t think Butterscotch, if he comes by, is going to be able to find us. After setting up, I go back to the PCT, try to make a sign of sticks for “BS”, but even as I make it I feel it’s futile. He’s not going to see it; I’m going to lose him. Womp womp. By the time I get back to camp, though, dinner is ready – spoiiiiiiled – and it’s watching the night settle in as the breeze hums tunelessly, before we finally retire for the evening.

[1] Dogs are totally allowed in Wilderness areas. They’re supposed to be on leash, but they are allowed.