I almost enjoy cowboy camping – I definitely enjoy it more than I would’ve enjoyed tenting. As the night wears on, I wake up sweating, have to wriggle my way out of layers and out from under zippers and such. The moon also wakes me, hanging pendulously amongst the stars, seeming to bear a message that I don’t quite get before I fall back asleep. In the morning, I’m tired, but not altogether cranky, though my mood sours a bit when I remember I have to say goodbye to Pineapple.

In an effort to shave off some miles so she can meet her boyfriend on time, she’s taking the Oregon Skyline Trail to Shelter Cove. Spesh and I, on the other hand, are taking the PCT to Willamette Pass, so I can head down into Crescent Lake to grab my resupply box. I’m not 100% sure I’ll see her again, as much as I want to make it happen. So it’s hugs and not-crying as we reassure each other that we will see one another again. We just will. The camp’s hushed as we walk out at 7:30. It seems barren, desolate – or maybe I just miss my friend already.

It’s a slow start again this morning – going uphill all Thomas the Tank Engine, I think I can I think I can. I have to remove layers pretty quickly, and I’m constantly reminding myself to eat eat eat. The glimpses between the trees are pretty today, and Spesh distracts me from further monotony with conversation. 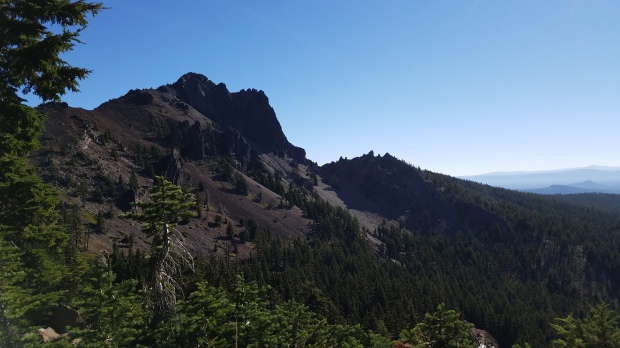 It’s early still when I’ve got to stop to dig a hole, but man, do I get a poo with a view today.

the world is my toilet, or something

Not long after, it’s another view:

And then it’s down, down, so many switchbacks like so many thoughts of the future, which I share with Spesh – thoughts about the end of the trail, about what I want to do, what I want to create when I get back. Back and forth and back and forth on how I want life to look. It’s as specific as I care to make it – as specific as I can be without really, truly considering what it’s going to be like to be off trail. I know it’s going to suck – and suck hard – but that’s as far as my brain is willing to take me.

Ahead in the woods is another hiker, who looks vaguely familiar; we catch up to Spaceman-not-Spaceman, who I haven’t seen in hundreds of miles. I guess he’s just Spaceman now, what with other-Spaceman being off trail. Still feels weird to call him that, though.

We go until we can’t go anymore, then stop for a break, chill for a while. Of course, when we get up, we don’t go two tenths further before we come up on Summit Lake, which is gorgeous. Shoulda stopped here. Womp Womp.

Spesh grabs water, then we make the best of the old adage: what goes down must come up. Or something.

There are ponds everywhere along this stretch, of varying degrees of acceptability as water sources. Some are nice enough, some are slime-covered cesspools, but all of them wink at me through the trees like stars. Stars who send their native life-forms forth to harangue us and try to suck our blood, but stars. There are a lot of mosquitoes about, and we climb to escape them until I can’t climb anymore. We tap out for lunch on a log beside the trail before the 15 mile mark.

The high mileage of yesterday is weighing on Spesh pretty clearly, so lunch stretches out. which is fine. Particularly since this section is six miles of up – he needs to rest up; I’m supposed to be making an average of 25 miles a day, and while we’ve got a little wiggle room, given yesterday’s accomplishment, I’d like to stay on top of it.

Up, up, past the trees, to the next summit.

But nowhere near the summit of the nearby peaks, looming over us.

Down just a wee bit to water, nice neat pretty beautiful flowing water, at which we sit and consult the maps, try to figure out where we’re headed for the evening. I think we can make Arrowhead Lake – the profile doesn’t look too hard between here and there, and that’d put us at 25.1 for the day. So that’s where we aim for.

Not a half hour later, I am full of regrets – there seem to be more ups here than either Guthook or Halfmile led me to believe, and Spesh is a-hurtin’. If we had more water, I’d call an early halt, but I don’t want to turn around to go back for some. Finally, though, it’s all downhill from here

Spesh is clearly exhausted, to the point of stumbling repeatedly; I’m pretty worried he’s gonna fall, but he stubbornly refuses to stop early. He passes by 1900 without even noticing, and I’m not gonna miss the photo op, so it’s a quick selfie and then racing to catch up with him.

thruhiker special – hair out of control, covered in dirt, pimpling like a teenager, and grinning like a fool

I catch him shortly after, and he looks ripe to fall directly over, so it’s me in the lead to the first site I see, awkwardly situated near Arrowhead Lake. It’s right by the trail and less than optimal, but I park Spesh there while I hunt for another place nearby, to no avail – there seems to be nothing better than what we’ve got.

I set up while he cooks; I eat everything in my pack save a Snickers, three oats and honey bars, and what I’ve decided is one dinner of chili + mac and cheese. I shovel in more mac and cheese and pancetta, and by the time I’m done, I’m ready to be unconscious. I’m not sure why a 25-mile day has taken so much out of me, but when we climb into the tent, sleep welcomes me with open arms.