I wake sore, but contented with what the day’s got in store for me. First, I get to see Crater Lake from the Rim Trail, and then, 10 miles later, I meet up with Spesh, who’s joining me for a week. Awww yisss. The knowledge motivates me, and while Pineapple’s looking to sleep in, I’m up and out and off quick as I can be. I’m sure she’ll catch me soon enough.

I’m grouchy going back up the Annie Spring trail – it feels like I’m headed straight up – but the miles tend to go by quickly in the mornings. Or, at least, on the mornings that I’m motivated. Once I hit the actual trail, it’s back down for a bit – which is more amusing than it is annoying – before the trail curves around and presents me with the climb up to the Rim. Uppity up-up I go, 900 feet in 2.3 miles. WHEEEEEE.

The climb, as per usual, has stimulated my intestines, and I’m stoked that the bathrooms at the Visitor Center are unlocked. It’s comfy and cozy before I exit and have a debate on my hands: do I wait for the Cafe and Gift shop to open before hiking on, or do I just go ahead and walk? I chat with two other thrus, Roswell and Nine Toes, enjoy their company so much that I decide to stay for a bit, charge my things, enjoy a coffee and the ample cell service up here. I’m glad I do, because a civilian comes up to us, asks us if anyone left their trekking poles in the bathroom. Thaaaat would be me. Clearly, I need my coffee before I can be held responsible for walking any further.

The cafe gets bum rushed by a whole seven people when the doors get unlocked; us thruhikers ferret out the outlets, order coffee, sip it while we download more podcasts. I put 72 hours’ worth on my phone, hope that’ll get me through to the next wifi stop. Roswell, Nine Toes and I swap podcast suggestions, and I’m stoked to have a couple of new ones to try. I hold off on leaving for a while – buy some postcards, send some emails, catch up on some stuff. Then I can tarry no longer, so it’s outside for my first views of the Rim.

And a picture where I forget to look at the camera.

I call Spesh, learn that his flights got delayed, that he probably won’t be at the meeting point until 4 or so. Rad. I’ve got about 18 miles to do, which should average out to about six-ish hours – particularly since the Rim Trail is supposed to be pretty chill.

Although the views hardly change, they’re still incredible. That blue! After several days of walking in the woods and seeing the same muted shades of red-brown rock, evergreen, and sky blue, the richness of the water’s hue is a balm on my soul. I don’t even mind learning the hard way why horses aren’t allowed on this trail – it’s actually kind of fun to climb for parts of the trail, to meander off-trail in a couple of places where people have gone to seek better views.

The Rim Trail is crowded, but not too crowded – it’s early still, and the first shuttle hasn’t run from Mazama yet. Roswell and Nine Toes catch and pass me, though, as does Butterscotch – Pineapple shouldn’t be too far behind.

I take so many pictures of the vast blue expanse – even though the trail meanders away from the lake occasionally, it always veers back for nicer views. Away from the rim looking southward, I can stiLL SEE SHASTA WILL I EVER BE FREE OF NORTHERN CALIFORNIA AND THAT MOUNTAIN’S JUDGMENTAL VISAGE.

Looking that way, I catch a whiff of the recently-extinguished fire, and turn back to see a sign that’s all “We know, there’s still smoke, it’s fine, you’re fine, everything’s fine.” Well then. Thanks for the heads up. 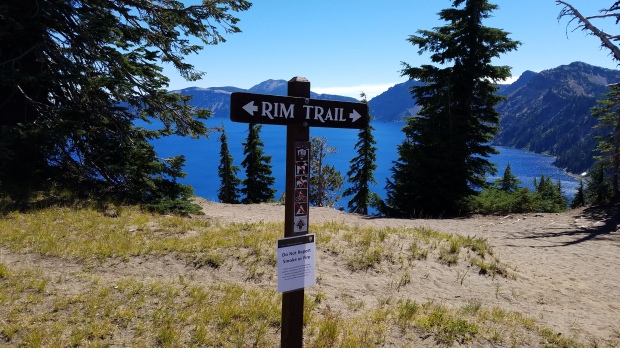 The closer I get to Wizard Island, the nicer it looks.

And then, a designated, drive-up viewpoint, and an explosion of people! 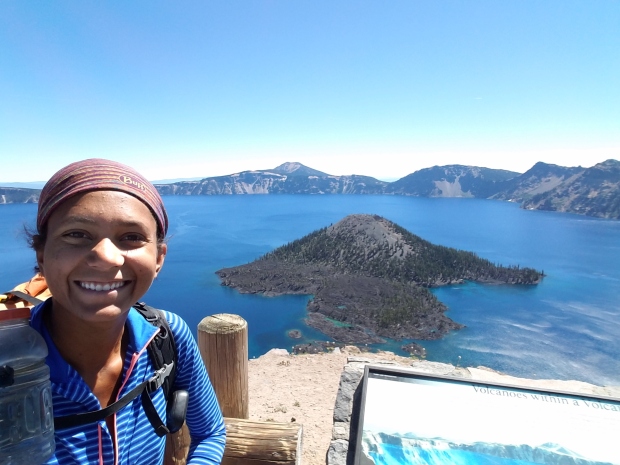 Not pictured: lots of other folks trying to get pictures, too.

There are way more false trails in this section, but also nicer views, even if I have to dodge people to see them.

I cross a road and, due to construction, do some road walking, which is odd-strange, particularly since said road walking is through a construction site where they’re stopping cars from going through on and off. The workers pay me and the other hikers I’m leapfrogging with no mind, since we try to give them as wide a berth as possible. 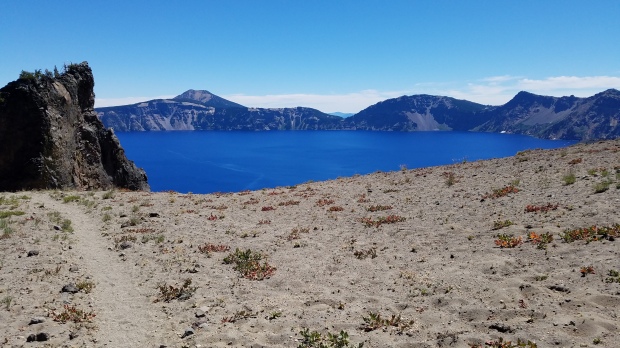 The color contrast in this picture tho

I linger for as long as possible, take as many pictures as I can, try to sear this day into my mind. I don’t know if I’ll ever make it back to Crater Lake, but I am so, so thankful to be here, so grateful that I’ve walked nearly 1850 miles already and, barring injury, I’ll walk 800 more. Sometimes I just stand at an overlook and breathe, feeling the life within me. My mind floats to life after the trail, wonders how often I’ll get the impetus to feel like this. I try to enjoy it while it lasts.

Although it comes too soon, the trail soon navigates away from the rim for good, leading us by the road and down and around to where it reconnects to the PCT. There are a bunch of hikers relaxing in the shade there – there’s a water cache near the road, about a tenth away, but I, as per usual am  carrying too much water, and I know I can make it to 138 where Spesh is supposed to be bringing a gallon for each of us. Not that we’ll need that much, but the hikers behind us might use some, too.

The home stretch to the highway is terribly monotonous, and after the feast for the eyes that was this morning, I find it hard to cope. My thoughts start flowing one into the other, in that inebriation-like, probably dehydrated, probably sleepy state that comes before reality starts to really warp for me. With an apology thought for Spesh, I sit, eat, drink, and close my eyes momentarily, to see if I feel better.

15 minutes go by – as does Eric – and I’m feeling better, so it’s the extra mile and a bit to the road, where Spesh greets me with a hug as soon as I cross.

It feels surreal, realities colliding, him being here. I give him a gentle, customary headbutt of love, then greet his friends iPod and Cherry Bomb, who gave him a ride over. There’s water and chocolate and tortilla chips, and Eric – who’s camping just up the way – is hanging out as well. We sit for about 40 minutes before we decide we should probably make some miles if we’re gonna – and anyway, iPod and Cherry Bomb must continue on their road trip. I thank them for being so kind as to give my gentleman friend a lift – hikertrash people are the best people.

Just as we’re leaving, Pineapple arrives, very briefly meets Spesh, then goes to set up nearby. She’s had a rough day, from the shortness of the interaction, and while I could set up, Spesh has been sitting all day and wants to do a couple of miles. I’m sure we’ll see Pineapple tomorrow, so I put him in front, and it’s off we go, up the hill, into the fading light.

It’s not long before we hit a dirt road, meet some folks who’re gonna summit Mt. Thielsen in the morning, who are interested in some company; Spesh, just coming from boatloads of people, wants some woods time, so we move on along further up the hill. Looking at the profile, it looks like things open up right around 1848.5, so we head on up and start scoping out spots. It’s only another three-tenths before I spot a nice one, way off trail, flat and beautiful and clearly already impacted. Home sweet home.

Spesh is the designated cook for the time he’s with me, so I set up my tent and his cowboy area while he starts cooking away – korma sauce with rice and rehydrated vegetables. I didn’t know I could eat so well on the trail; maybe next time, I’ll do a little more planning, send myself more nice things. Not that I hate eating M&Ms. We curl up under his sleeping bag to eat, and then it’s clean up time before the dark chases us to bed.