My alarm goes off. Pineapple’s alarm goes off. And still, not a creature is stirring in camp. It’s like a thruhiker’s game of chicken: who’s going to get up and face the day first? Turns out, it’s Bucha, not even entirely vertical and already running from the heat of the day, and she shames the two of us such we reluctantly call it a draw.

Bucha gets ready so fast! I mean sure, she’s got a tarp, and sure, she has a smaller pack than I do, but she’s sitting and eating with her pack beside her, amusedly watching us pack before ZOOM she’s gone.  Probably has something to do with that cathole most folks need to dig in the morning. If only my innards were so predictable.

Pineapple and I don’t get ready fast enough, apparently – the yellow jackets wake up while we’re packing and are ALL UP IN OUR SHIT. I’ve been saying it since SoCal: Bees have no chill. Still, we manage to get packed off and all but skipping along the last miles to Oregon. 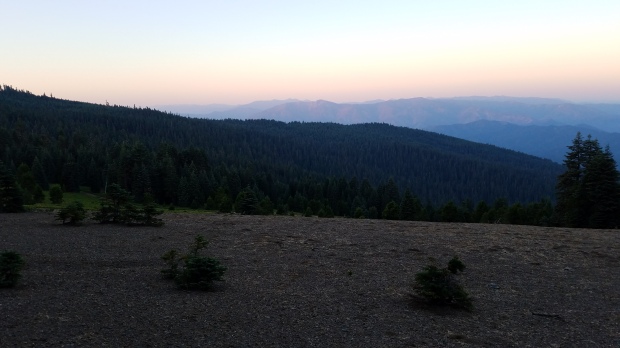 The path in this section is humming, a monotone that waxes and wanes – seems like we won’t be escaping the yellow jackets today. It’s almost meditative, or it makes me mindful, anyway. Present, in the moment. Making sure I’m not pissing off any stinging insects.

I catch Bucha, and we walk together for a bit, as another instrument is added to the soundtrack of the day: cowbells. They’re around here somewhere – they have to be – but there’s no sign of them, not even the ubiquitous cow patty we usually see in such sections. Bucha thinks we’re being fooled – it’s not cows at all, but a traveling tinker doing trail magic, fixing gear. I’m more partial to the arboreal bovine theory myself, but her idea works, too.

And then OH GOD OH GOD WHY CAN’T MY INNARDS BE PREDICTABLE GOD WHYEEEEEEEE.

Pineapple passes me  and I eventually catch back up to her and Bucha, and we walk together. 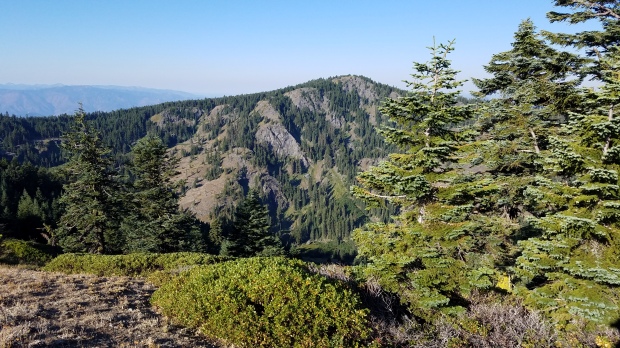 Climb and chat and climb and chat. I listen to them talk about the vegetarian and vegan life, learn a lot I didn’t know before about the social climate that surrounds both. We pass a pretty visible toilet at a pretty awesome break spot – if I could’ve just held on, I could have had a poo with a view. 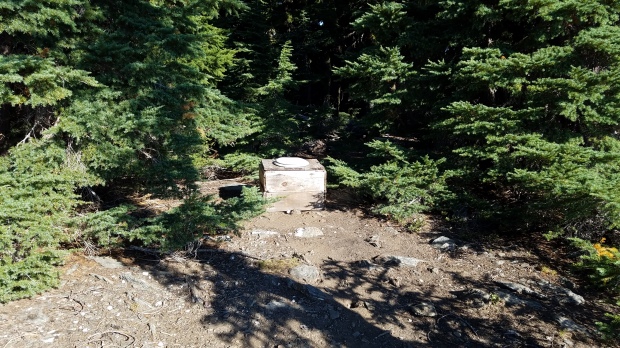 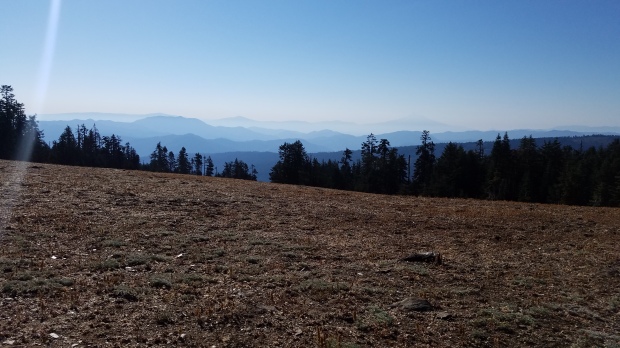 We move it on along, talk about moving and work and life. I’m thankful for these rad ladies I’ve found myself in the company of. The trail works in mysterious ways.

We stop for water at Donomore Creek, and the excitement rises to a fever pitch. OREGON. SO CLOSE. RIGHT THERE. ALMOST. We aren’t at the creek very long before we can’t sit any longer. MUST BE IN A DIFFERENT STATE.

We’re walking – flying? It feels like flying we’re moving so fast, I don’t think I’ve ever gone this fast up a hill. Past the creepy cabin we go, and then there it is. The border. 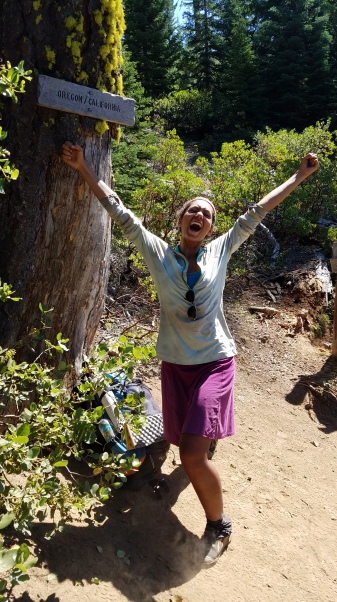 We take silly pictures and read the register and and and. I sign my first state away: “There is no more California. Only Zuul.” I think to leave it, but I can’t resist tacking on an “AWWW YISSS” at the end. I am who I am.

We see a flash of color coming down the trail – Butterscotch doesn’t notice us until we slow clap him in, hooting and cheering for his accomplishment. More hugs all around. WE’VE DONE THE THING. Or at least a thing. Nearly 1700 miles’ worth of thing. 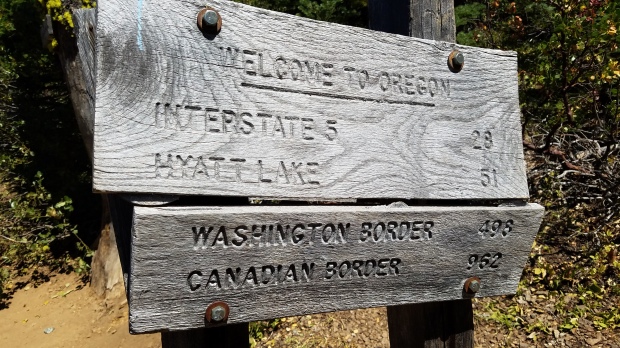 As the sign reminds us, though, this isn’t the end goal, so after a sizable amount of celebration, we continue northward. Into Oregon.

Oregon’s supposed to be flat – or so I’ve been told – but our first few miles in Oregon are up, all up, the same old fun climbs as NorCal. I think about a former professor of mine, who does a lot of work on the arbitrariness of borders. Sure, crossing the border meant something emotionally, but physically, little and less has changed. We’re still climbing. We’re still hot and sweaty. Even if we’re still flying high on our accomplishment.

Pineapple, Bucha and I walk and talk about such things, and before we know it, we’ve made it to Sheep Camp Spring, a cold, fast-flowing piped spring just a little ways from shade. We sit and Butterscotch comes along and we sit some more. We have all the feels, all the words in us today. 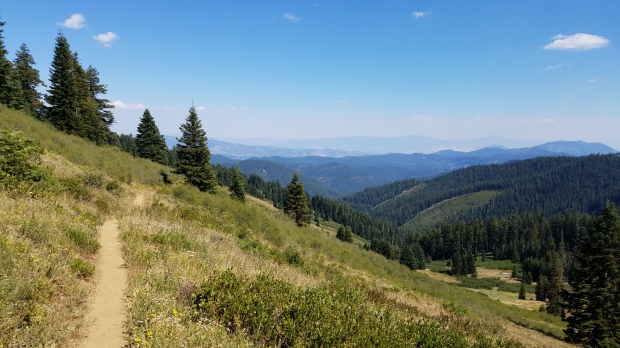 We continue on down a ways, but there’s one up between us and 1700 – a wee little thing, after all the climbing we did yesterday. 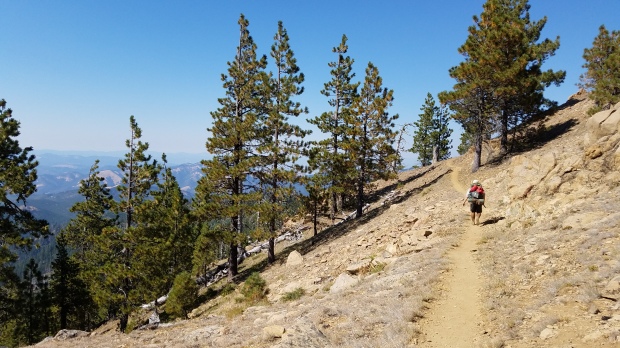 Turns out, that wee little climb does not feel so wee – there are no switchbacks, so it’s straight up the hill for us. It’s hard, but I plow through, passing everyone for once, although I’m pretty rapidly passed on the way down. 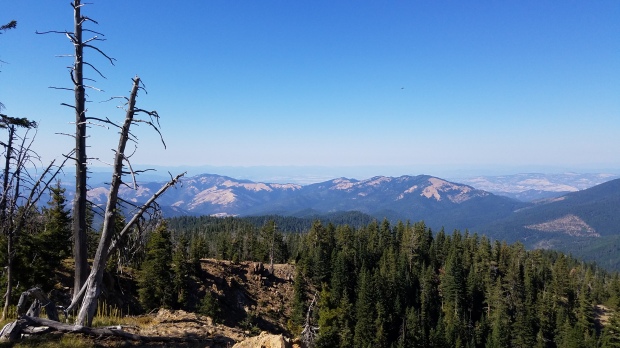 Vertigo’s hanging out at the bottom with Butterscotch and Pineapple and Bucha – some Southbounders roll up, give us the scoop on the ice cold soda waiting for us at the top of the next hill. Awww yisss. 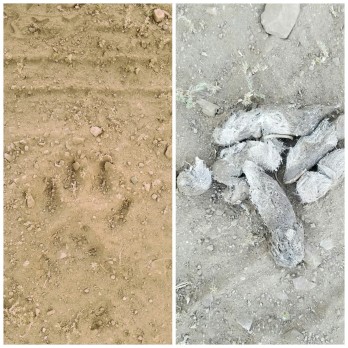 Also I see this and am pretty sure there are pretty kitties nearby.

We don’t even make it 100 feet down the trail before there’s another SoBo who wants to give us ALL THE INTEL from here to Canada; it’s nice, but I like to leave some things to my imagination.

Bucha, Pineapple and I roll up on 1700 together. 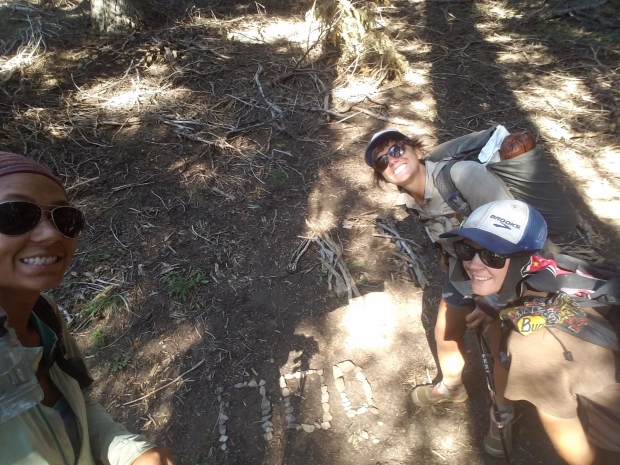 It’s basically a 4-mile, 1100-foot climb from here – and yet again, there are no switchbacks. Does Oregon not believe in switchbacks? Is this something I should just expect from here on out?

I’m toiling up the hill when Toto, another SoBo, asks me if I’m Zuul or Pineapple. Um, yes? Your friends are ahead – hurry it up! He can’t remember the name of the person who asked him to pass along the message, but it’s a dude, and from the snark I’m about 80 percent sure it’s Six. Which means Six and Meer are just ahead. Today just keeps getting better and better. 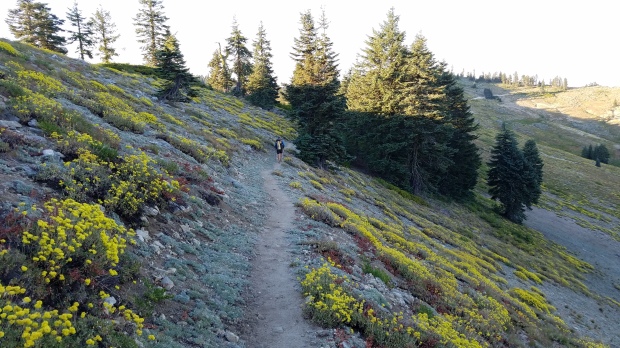 The news of Six combined with the knowledge of impending sodas gives me newfound energy – I can’t seem to go fast enough for my liking, but I’m making good progress for all that.

And then, hikers! And sodas! 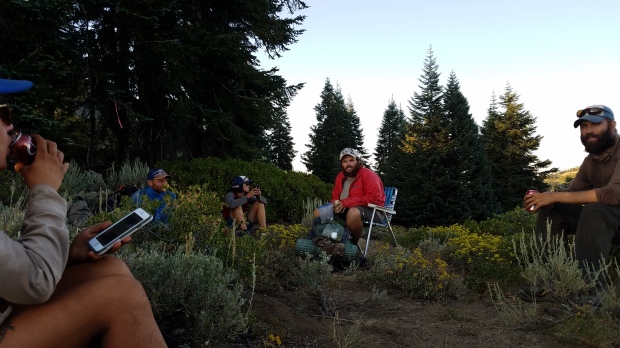 There’s another message from Six in the register there – they’re staying in the shelter at Grouse Gap Camp, just a little over a mile ahead. YES FRIENDS YESSSSS. The sun goes and it gets colder and colder, so I keep moving for warmth, down the hill and off the trail about two tenths to the shelter.

Sure enough, Six, Meer, Hatchet, and a bunch of other familiar faces are all there – and a bunch of unfamiliar faces, too; the local college is out celebrating an impending trip to Nepal, and a bunch of matching tents are sprouted like mushrooms all over the field just beyond the shelter. I set up, and everyone catches up – so nice being with friends! I eat dinner in the dark and retire to my tent, warm and accomplished and comfortable despite the lumpiness of the ground underneath me. What a day I’ve had today – and what a day I’ll have in Ashland tomorrow!