CRASH CRASHITY-CRASH CRASH CRASH. It’s 1am, and it sounds like deer are failing miserably at being quiet, adorable forest creatures. Pineapple and I yell, clap, make noise to be like “hey jerks, we’re trying to sleep here.” But they don’t seem to get the message. Over and over again they return, stumbling around like drunkards in the nearby brush.

Pineapple starts to freak out because she’s cowboy camping and doesn’t want to be messed with. I start to freak out because I haven’t had enough sleep and I think that kitties are going to come where their food is being a bunch of idiots. I settle back in uncomfortably, and am wrenched from sleep god knows how much later by Pineapple screaming like she’s getting mauled by a mountain lion. All my exhausted brain knows how to do is scream back, which makes her scream again, and it takes a while before the vicious cycle is broken and we both calm the hell down. It was either just a small rodent of some kind travelling over her legs or a dream, she’s not sure which. Still, now I’m attuned to sound, and when she talks in her sleep a couple of times I’m up like  a shot, looking around with my headlamp, clapping.

We joke unenthusiastically about getting in the way of the deer commute last night – that is the last goddamn time I’m camping near a deer track. Learned my lesson. I head out thinking everything’s gonna get better from here – I’m gonna have a good day, dammit. 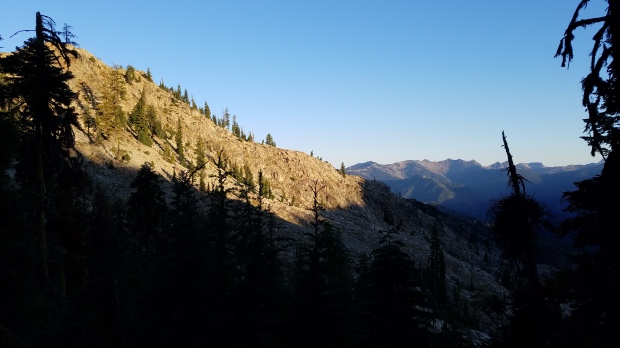 Things of course rapidly deteriorate – even though (because?) I’m not taking many breaks, my speed drops to about 2 miles an hour. It doesn’t help that I stub my right toes – yes, all of them – really, really hard; I’m left with that cartoonish cloud of anger swirling around in my thoughts. Damn hiking. Damn mileage requirements. Damn damn-ness.

The trail is doing a lot of sidehilling on the right – and the trail is sloped that way, too; there’s no chance for my right side to stretch out like it wants to, and my left side has to reach further to hit the ground. My left shin is starting to complain about it, too – which of course turns the black cloud of anger into the black cloud of worrying about shin splints.

It’s pretty, though, and I try to stop occasionally to make sure that sinks in.

Talus today, so much talus! So much talus and so much up, I tell myself, that’s why I’m going so slow. And I didn’t get a lot of sleep last night. So many mitigating factors! Be gentle on yourself!

A southbounder by the name of Continental Drifter comes along, starts to chat. He’s been doing 30s from Washington – he just got off the Te Araroa in New Zealand, so he’s super conditioned. He’s also pretty much at the head of the pack; I think I’ve only seen five or so thru southbounders ahead of him? He’s happy about that, up for the challenge of trying to pass them. I wish him luck, but the whole interaction doesn’t help with the whole “be gentle on yourself” idea.

I make the conscious decision to take at least an hour for lunch today – I’m 100% not making 30 today. Pineapple, when she catches me, is totally with me. We’re both having a rough day mentally. We’re both ready for a new state, that arbitrary boundary line that is sO CLOSE and yet so far and, for some reason, means so much to us. Means we’re actually getting somewhere, I guess. It’s hard to look at the big picture when your brain doesn’t want to cooperate.

I’m also ready for Spesh to come, to be able to see the trail through his eyes – see it as fresh, as new again. Or at least, as nostalgically as he does. I think that’ll be nice.

The break time goes by way, way too fast – eventually, I find myself at the nearby water source, loading up with two liters for the next 8 miles. It’s probably overkill, but with how slow I’m moving, and the heat, and the talus – ugh, so heavy! But it’ll be nice not to feel bad about taking more breaks.

There’s a short switchback up, and then more sidehilling on the right – the arch of my right foot starts to burn. My body is just not having it today. Even when we crest this hill and come down, there’s even MOAR SIDEHILLING on the right. Ugh.

A burn area comes up, and there’s Butterscotch, chilling, his indomitable smile on his face. I don’t begrudge him his happiness, but I don’t manage to stop the pity party my brain starts to hold for me, even if part of me does know it’s ridiculous.

I then manage to stub my left toes – yes, all of them – really, really hard. HOW ABOUT YOU CUT ME SOME SLACK, DAY. I am trying to see redeeming qualities in you; how ’bout you help a sister out?

The day responds with a shitload of blowdowns, and I decide that I officially have California senioritis. And that’s okay. 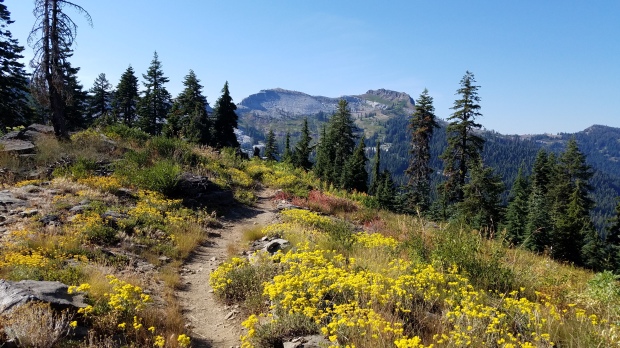 I’m anxious for it to be over, decide to go to the next listed tent site, 22 miles from where I slept last night. But it wouldn’t be today if I didn’t have to go through a hella up to get there.

Galactic – who I met last at Warner Springs! – is set up in the site, cordially allows Pineapple and I to join him. I push slightly at a dead tree overlooking a nice site, and it moves a lot, so I go ahead and push it the rest of the way over. There’s another one doing the same, though, and while that one seems less likely to fall all the way, today has just been one of those days, so I set up in a less-than-optimal spot where I won’t get crushed in the night.

I eat with Pineapple, count calories – seems I managed an appropriate amount of food today. Not that it helped. …Or maybe it did. I shudder to think of how the day would’ve gone had I eaten less.

I crawl into my tent right around dark, and don’t make the mistake of thinking the night’s going to be any better than the day was.