I’m pretty sure my sleep is the inverse of my sleep in Mount Shasta. I have to pee in the middle of the night, but I don’t want to get up, and then I realize that I, in fact, have to get up if I don’t want to pee in my bag. It’s the first time I’ve had to get up to pee in the night in 97 days, and I feel like it’s the end of an era. I’m a little worried that whatever it was that roared earlier is going to come for the tender flesh of my ass, but I make it back into my tent with ass intact. I do have nightmares for the rest of the evening, though, and by the time I wake up, I’m pretty sure I’ve had fewer than four hours of restful sleep. Nrrf. Still, I’m moving by 6.

There is so much up on our docket today. It’s gentle for the most part, but it looks like we’re going to be climbing for the larger part of the day. Between the sleep deprivation and the profile, I go for my headphones pretty much immediately on walking. Something’s gotta salvage this day before I wreck it with my mood, and that something, I’m hoping, is more Stuff You Should Know. 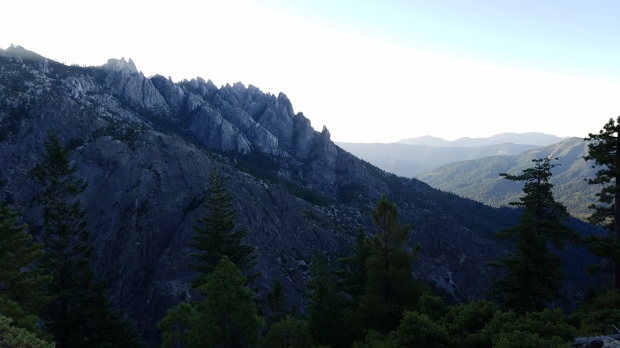 It’s difficult, though – every time I get the chance to think, I’m annoyed, and the only real place I have to direct that annoyance is at myself. I’m appreciative of the beauty of the morning, but somehow I can’t let go of the annoyance to appreciate it. At least, not fully. 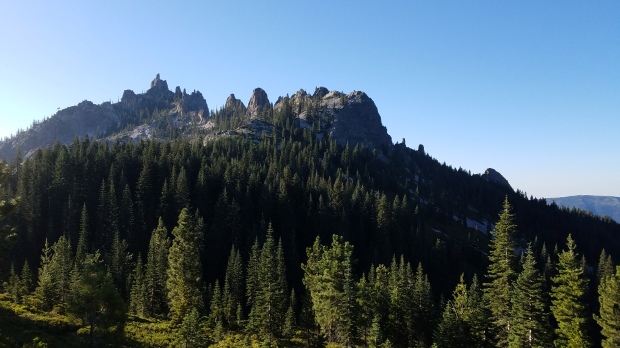 I do stop for water and get distracted, though: pitcher plants! Pitcher plants everywhere!

Apparently this is (one of?) the only places in the continental US where carnivorous plants grow wild. They’re usually found in more tropical habitats – it’s warm all the time there, and they are, from what I understand, usually sensitive to temperature change, but these are native, and thriving.

Pineapple stops and I point them out to her; she’s less enthused about them than I am, but thinks they’re neat. We talk lunch break, and I point out a couple of likely spots on the map; we agree on the junction with the Seven Lake Trail – it’s a saddle, and the end of our longer up for the day. So once I’m done treating my water and cooing over the pitcher plants, it’s back to the trail.

And back to my grumpycat mood, unfortunately. It doesn’t help that every time I stop to check my mileage, I’ve barely gone anywhere. This up is all kinds of demoralizing. Well, that, and the up is also accompanied by a southward turn in the trail. Yep, we’re northbound, headed south. So that’s fun.

View “south” back to Mount Shasta

When I talked to Spesh yesterday, he recommended a campsite with rad views of Shasta and the Castle Crags; while there was no way we were making it there yesterday – it was 18 miles out – I hit it around 10:30, marking a little under 8 miles for the day. In a little over four hours. Woof. Today is trying hard to make itself unredeemable.

These views aren’t even enough to cheer me up. Ugh.

There’s nothing quick about getting to our lunch break spot five miles later, but I make it without screaming in rage or throwing anything off the side of the mountains, so I call it a win. I try to find a spot to eat out of the wind but, barring that, make do with a spot with a great view. The food and the view and the company, when it arrives, are heartening – maybe today’s gonna be alright. 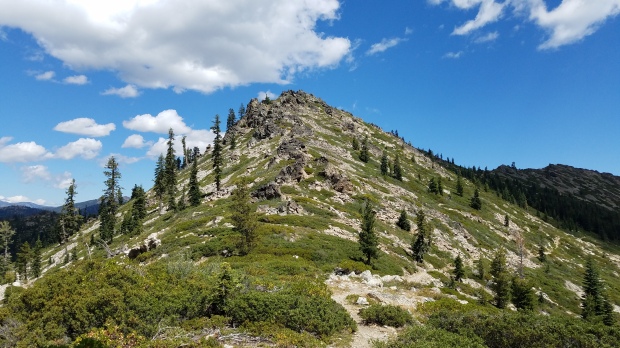 I talk to Pineapple about my weird feeling, and, particularly, about being unable to shake it. She commiserates, and we while away an hour in each other’s company before setting out again.

I pretty much immediately feel like both Guthook and Halfmile have conspired to lie to me – it’s a net down in this section, sure, but it feels like we’re headed up. I’m still dragging, leapfrogging with Eric; we cross a road, where there are beers and Lara Bars stacked up neatly, presumably for thruhiker consumption. I’m not a Lara Bar person, but I do grab a beer, put it in my pack – at least that’ll help me sleep tonight.

After a while, we’re done pretending at down, so it’s up again, on a ridge around a lake.

I run into Pineapple around a bend; I think it’s smart to only do 25 today because UGHHHHH. Pineapple isn’t really feeling it either, so we agree to meet at Upper Deadfall Lake. I’m glad she’s understanding – I’m really lucky to be hiking with her1. There’s time now, since we’re not trying to push for a 30; I call my father, spend some time on the phone with him before heading out to finish up my miles for the day. 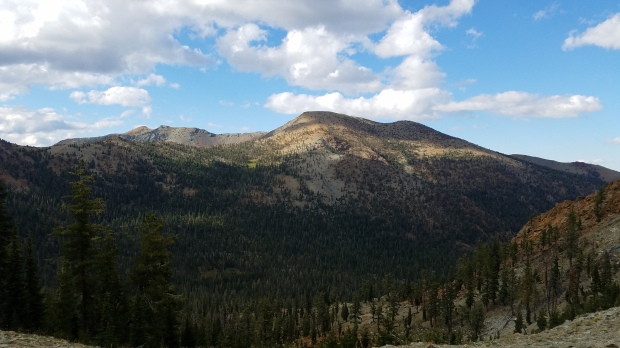 Today’s last bit of walking is a bunch of talus, but there’s a lot of camping near the lake, now visible in the distance. Pineapple’s already there, scoping out a place to set up, given the wind that’s kicked up; we find a place to set up that’s sheltered, and I pitch in such a way that I won’t be kissing the roof of my tent in my sleep tonight. I eat and break out the beer, which we split. After that’s done, I get in my tent and immediately try for sleep; I don’t even write, just to get it over with that much faster. Sleep takes pity on me, and reminds me that tomorrow is another day, a different day, and, hopefully, a better day.

[1] I honestly don’t know if I told her this enough. Having someone this rad put up with my shit for this many miles… she’s a saint.