Pineapple’s the first one rustling – she’s so much better at this “actually listening to the alarm” thing than I am – but I’m not too far behind. Dirt Squirrel and Chili start to stir as we pack up, get a move on, but Butterscotch is still sleeping, barely starting to stir as we walk away. I wish I was him right now – the morning is beautiful, serene and soft – but walking early is the price I pay for not being as fast as my peers. Still, I take one last, longing look at the cloud-covered sky, and hope it stays that way to keep off some of the heat of the day.

We’re back to walking along that ridge, moving up in our first bump of the day. The clouds, while maybe indicative of rain later, are a really nice change from the blinding mornings we’ve been having. Variety is the spice of life, so they say, and while I’ve been loving all dat sun sun sun, this is really pretty, too.

It’s strangely quiet in my head this morning – there’s usually a million and one things flying through at light speed, but this morning, I’m just an observer. It’s a pretty nice change. 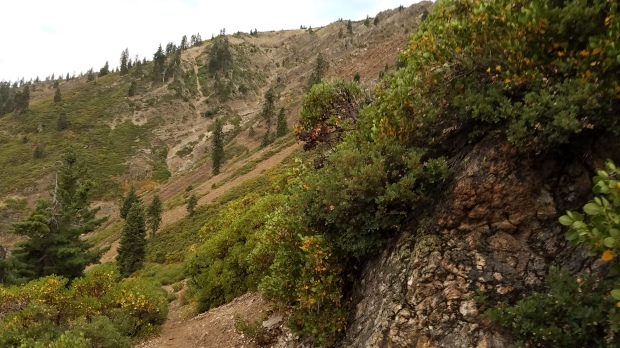 The sun, as it gets higher in the sky, starts to dance in and out of the clouds, giving us a show reminiscent of scenes from the Lion King. 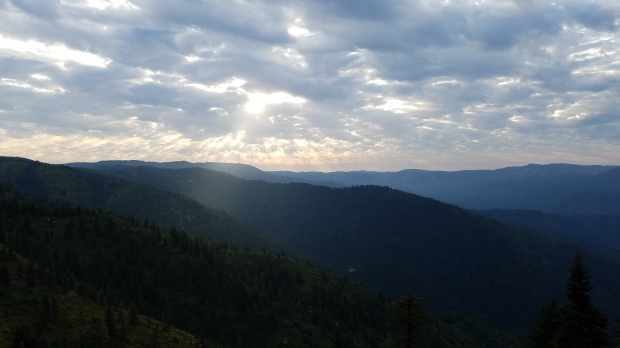 Pictured: some mountain lion being declared Prince of the Forest by some wise Pine Marten. Probably.

I love walks like this. Love them. This morning is a reminder of why I’m doing this: just to be a human animal, in the wilderness, remembering what life is supposed to be about. Remembering that everything else is just things we’ve decided to do to ourselves. For reasons. What reasons, I’m not quite sure, but I’m sure I could come up with some if I thought harder. I’m not going to ruin my morning like that, though.

On one of the two morning ups, I lose Pineapple, but I imagine she’ll catch me on the long down we’ve got in store.

There’s a shift in the trail’s landscape as it starts to trend downward – from rocky ridges to soft green forest, water galore:

The trail’s so nice and well-graded through here that I start to type as I walk, catch up on the posts I’ve been neglecting. Pineapple does indeed catch me as I’m meandering, and we chat – she’s feeling slow today, but still kicking my ass on the downhill. For reasons. My brain starts to come up with all those reasons before I find Pineapple stopped in the trail. Ahead of her: a deer that seems to be confused about what we want.

We talk to it, try to shoo it off, but that seems to just make it more confused. Eventually, it moves off the trail to walk uphill of us, but towards us. It gets pretty close, seems pretty fearless. 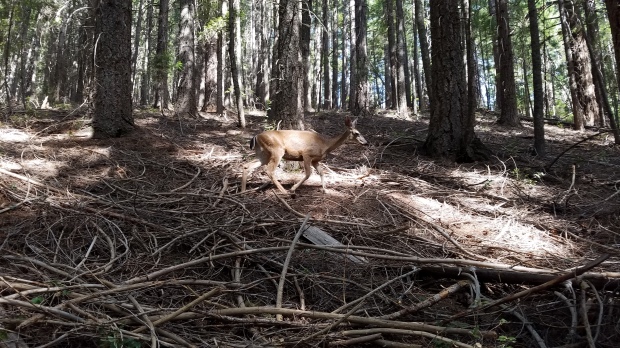 Selfies with wildlife can be dangerous and should be practiced with appropriate “Can I get away with this?” faces.

Then it’s on down the trail, closer and closer to the McCloud River – basically the bottom of the hill – where I intend to take a break. Focused, I end up passing Pineapple again, though I’m sure she’ll catch me before long.

Soon enough, there’s a bunch of rumbling from the trail ahead, where I’m dumped into a parking lot that has a dirt road going by. A lot of Native folk are headed up the hill, carrying what I presume are implements used in ceremony. It turns into a fun “I try to figure them out they try to figure me out” game, with a few nods and waves thrown in for good measure. Then it’s down the hill to Ash Camp and the McCloud River.

After utilizing the pit toilet, I curl up in a shady car camping site, explode my food bag, and get to eating; I howl at Pineapple as she comes down the trail, and she joins me, going to rinse her socks and soak her feet in the river. Dirt Squirrel and Chili come by; Dirt Squirrel has apparently come down with some sort of illness, and they plan on hitching out to Mount Shasta from here. We all eat lunch together, frown at Dirt Squirrel’s clearly deteriorating condition together, before they decide to get a move-on hitching and Pineapple and I decide to move on down the trail.

So it’s across the river for us.

I love it when the water’s a strange color, but fear it’s for pollution reasons.

After a bit of updownupdown, it’s back on the uphill offensive, with poison oak and the rest of the scrub brush gang encroaching on the trail at all times. It’s a lot of paying attention to where I step, lest I get the oils on my skin – I’m not wearing my leggings, and at this point, I’m too hemmed in to find a place to stop and put them on. The hike takes more mental energy than I’m used to, so it’s a lot of cursing about rassum frassum trail maintenance rassum frassum why am I complaining rassum frassum this is the first real time I’ve had to deal with this but also rassum frassum it’s been miles.

This was one of the clearer parts.

Butterscotch catches me while I’m rassum frassuming, and his indomitable cheeriness contagious. He sets a good pace, too, so I’m following close behind and learning about him and swapping stories about our hiking and not-hiking lives. While he leaves me behind for the last little bit of the last uphill, there’s no doubt in my mind that it would’ve been a lot harder without him. He’s taking a break at the top, where there’s service, and I flop down and internet and chat with him, thanking him for helping me out in a hard section.

Pineapple catches us, and we sit some more, though Butterscotch heads out soon enough. I vaguely consider staying right here – I could do some more work – but figure that there’s probably a place to park down at the bottom-bottom of the hill, at Squaw Valley Creek1. Pineapple agrees, so it’ll be a “short” day – 26.5 miles, less than I’d hoped, but nothing to sneeze at, either. We’ll be in Mount Shasta tomorrow, and I book us a hotel there because I’ve done a lot of communal staying recently, and I want to be more-alone2 than I would be in a hostel.

So it’s down, down, down I go, with lots of little bumps in between.

As I get closer and closer, I start to see what I think is bear scat on the trail. I start singing, just so everyone’s clear on where everyone else is. 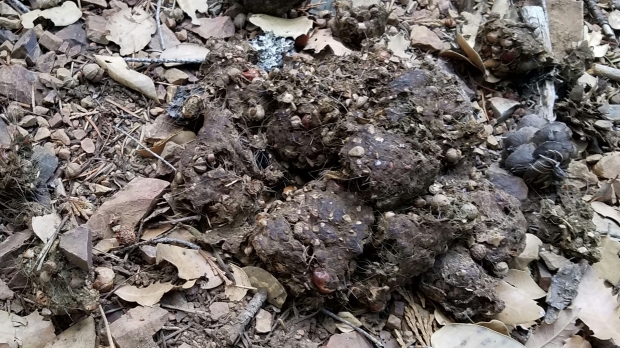 I think this is what bear scat looks like? Can’t think of another big-enough animal that likes berries so much.

Finally, the creek – and the ravine the creek is in. There’s a bridge over the creek itself, with a steep drop down to the river on either side. There are some places to camp nearby, but Butterscotch, set up in one of them, says there aren’t really any good ones to go around, although he offers to share his spot perched over the river. Nah. Pineapple’s coming, too; best we all be safe about it.

The profile’s pretty tight for the next long while, and it’s starting to get dark, so I decide to wander towards the nearby trailhead to see if there’s any camping that way; I ask Butterscotch to let Pineapple know where I went. It’s a short walk to the trailhead, and all the spots a girl could ask for. 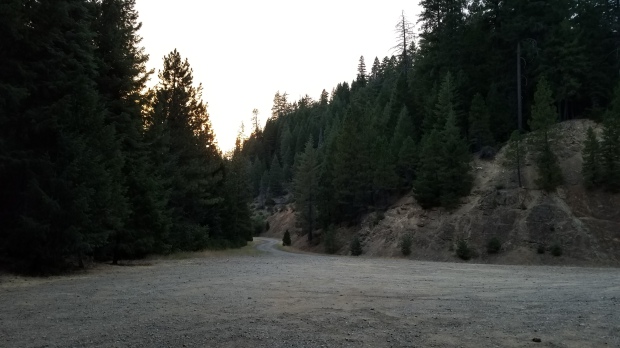 There’s a pit toilet to the right of this frame. Also, a van, so I ended up camping up the trailhead trail a little ways.

Pineapple finds me as I’m setting up, sets up along with me. We talk briefly about my tent-pitching idiosyncrasies, eat dinner, and talk relatively late into the evening. It’s been a long day – sure, we did fewer miles than normal, but we also did 6,000 feet of gain and nearly 9,000 feet of loss. We’ll be in Mount Shasta tomorrow, and we’re both looking forward to the niceties of town. We’re both also looking forward to getting the hell out of California, but one step at a time. The remaining two hundred miles in the state taunt me as I drift off to sleep, the sound of the creek following me into my dreams.

[1] SO MUCH CRINGING AT THE NAME. And then I wonder why it’s called that, and the possibilities make me cringe some more.

[2] As an introvert, I recharge by being by myself. I can, however, feel alone (in a good way) when I’m with certain people. Pineapple is one of those people for me.