This morning, it’s a little bit of sleeping in – the plan isn’t to make miles so much as it is to make sure Pineapple and I get our Burney resupply done. We’re about 3 miles out from Highway 89 – supposedly the less-populated of the two roads into Burney – and I’m anxious to get there already, since I’m pretty worried about getting a hitch. Hopefully it goes smoother than I think it will. Hopefully.

We’re both talkative this morning – I think this will be the shortest distance into town I’ve ever done, and I’m looking to make even that go by as quickly as possible. So it’s over a bunch of dirt roads that seem to see a lot of use, and then, before we know it, out to the the highway.

I’m prepared this time – at the Wild Bird Cache, I used the permanent markers to write “Burney Falls” on a section of my tyvek. Folding it in half just gives us “Burney” to work with, and work it does. After eating the dust of a few semis and despairing, a Subaru pulls over, and a gentleman welcomes us in.

The driver’s name is Gary; he’s headed to his brother’s place to help him with some deck work. He’s done a lot of carpentry in his day, and he’s trying to reconnect with family, but he’s got time to take us to Burney, let me resupply and Pineapple pick up her package, and even give us a ride back to Burney Falls. Holy crap. As we wander the shelves of the Rite Aid1, he moves back and forth between us, asking us questions which we’re happy to answer. It turns out that the post office is still closed, so we kill time at the Blackberry Patch, a diner, where we eat breakfast and insist on paying for Gary’s coffee.

Once the post office opens, Pineapple discovers that, despite all the promises in the world from the postmaster at Old Station that her resupply package would arrive in Burney yesterday, it hasn’t arrived yet. Ugh. She’s devastated, but there’s still hope: the postal worker here has offered to drive to Old Station on her lunch break to grab the package for her2. Such kindness!

Unfortunately, Gary can’t stay that long; he has to be getting to his brother’s place. He does give us his phone number, though – he lives in Ashland, and says that if he’s in town when we get there, we’ve got a place to stay, shower, do laundry. Holy crap. Today’s a day to restore a girl’s faith in humanity, I tell you what.

We wave goodbye to Gary then hikertrash it up on the side of the RiteAid, exploding our packs and shaking things clean since the laundromat is closed today. I repackage everything for the next stretch, then Pineapple goes and asks if we can charge things in the section of the dining room that’s closed. The waitress, having seen us earlier, is kind enough to take pity, and we both head inside to doodle around on the internet until Pineapple’s package is safe and sound in her hands.

She packs up, quick as a wink, and we’re debating the merits and flaws of places to hitchhike by the side of the road when a gentleman stops. He’s more than happy to take us back to where the trail crosses the road, and it’s a quick ride back, and then we’re back to trail life as we know it.

This is certainly not what I was expecting:

It’s a pretty stagnant pool, maybe a foot deep at its deepest part. I feel vaguely ripped off – isn’t this supposed to turn into some kind of waterfall about a mile from here?

It goes so far as to disappear for a while, before coming back flowing: first shallow, then deeper and deeper.

Where the trail ends and the pavement into the State Park begins, we’re also left a little underwhelmed – we can hear it, but it’s not until we start weaving through groups of people that we finally get to the overlook.

Seriously where did this come from how on earth did this happen what the hell nature is rad. 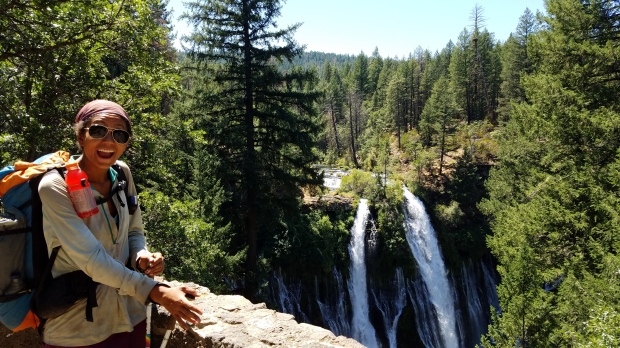 We spend a bit of time ooh-ing and aah-ing over it, before both of us succumb to the heat and we both decide showers are in order. There’s a long line for quarters at the store, but I get two dollars’ worth and spend every single one of them. I don’t think a shower’s felt this good on trail.

Eventually, though, the quarters run out, and while I’m waiting for Pineapple I catch myself staring hungrily at a group of kids eating watermelon. It’s belatedly that I realize how I must look – clothes all disheveled, clearly living out of a backpack, unable to look away from some kids. Well then. Oops. Pineapple saves me from myself, and we tear ourselves away from Lipstick’s offer of trail magic later this evening. Three miles isn’t enough for me; it’s time to walk.

About an hour later, we’re on the Lake Britton Dam, staring at a  marvel of human technology. So strange, how we’ve chosen to exert our “mastery” over natural spaces, and what a contrast to the natural waterfall.

It’s kind of pretty in its own way, I guess. Not exactly the scenery I came out here for, but it’s nice for a change, I suppose.

Still, I’m happy to get back into the woods – I’ll take any shade I can get at this point, even if it is sparse.

There’s a mile and a half of up after the dam, and then some winding down to Rock Creek; I get there before Pineapple, and she finds me sitting under the bridge, cooling it in the shade that’s not actually much cooler than the sun. We hear other hikers giggling not far from us, but can’t quite see to where they are. Sounds like they’re swimming, maybe. I don’t know if I can move that far in this heat, even if it is to swim.

Butterscotch comes along the bridge, grabs some water, says hi before he moves on along for the evening. Me, I’ve finished some snacks and let my AquaMira cure when I am struck by horrendous cramps that make me howl in pain. Close on the heels of the pain is the sudden need to poop. NOW. But we’re in a ravine, and there’s really nowhere within a quarter of a mile where (a) I can get off trail an appropriate distance and (b) doesn’t wash down into the water. I scramble as far uphill as I can and I barely get a chance to drop skirt before I pee out of my butt.

I come to my senses to two immediate thoughts. First, I have wandered into a patch of tiny, painfully pointy seedpods, and I am now covered in at least a hundred of said seedpods. Second, I didn’t get to dig a hole. So it’s back down the hill trying not to cry for the pain, then back up the hill with some water to try to disperse my shame. It doesn’t work very well, though I do the best that I can, between the dirt and the nearby grass and the water3.

Pineapple heads out ahead of me, but is stopped by a hiker ahead of her; I hear “ZUUUUL!” shrieked from up the trail a ways. It’s Zippee, from the aqueduct! Damn, that was a while ago. Damn, that means I’ve been slow – she took a bunch of time off and here she is. Wow. You go girl.

More up up up this evening – I’m moving slow because of my previous sickness, but I’m definitely going to make it to the next campsite. I just am. So I wind my way around and up through the trees to a sign for a spring – where Zippee and the gang are all stopped. Home sweet home for the evening.

The tentsite’s a defunct forest road, so it’s nice and flat and open, with only a few trees here and there to reassure us that we’re not going to get run over in the night. We all set up fairly close together, and then someone starts a fire, and then there are six of us huddled around it for warmth and light and sweet, sweet company. Someone drops a line from a Disney song, and then it’s the men in the company leading us in a thruhiker rendition of “A Whole New World” and various songs from The Little Mermaid. I laugh so much my stomach starts to hurt again, so it’s off to bed in my tent without the rainfly, staring up at the trees and the stars before sleep.

[1] Which, while a bit pricier than I was hoping, had pretty much everything I was looking for.

[2] It’s a 30-minute drive from Burney to Old Station. It took us about a day and a half to get here by trail. That’s so… underwhelming.

One thought on “Day 92 – The Kindness of Strangers”