The camp starts to move as one at 5:15, the growing light a call to our morning matins of hastily-munched pop tarts and languorously sipped coffee. Blessed is the Meerkat, I boast, for she is the bringer of coffee and consciousness. Six jokes about renaming her Coffeekat, but she’s so much more than that. Coffeekat is just an aspect of the wonder that is Meerkat. I finish as quick as I can to let her pack the pot I’m using, and then it’s packing up myself. I’m packed and up and out by 6:00, reveling in the glowing sunrise.

Today’s the day we hit the official halfway mark, and I’m both excited about and dreading the prospect. Excited: we’ll be halfway! Dreading: we’ll only be halfway! But there’s a dark and a light side to everything, and at least now, no matter what, I’ll be able to say I hiked 1325 miles.

That it’s already warm this early is concerning – sure, we were told NorCal’s a desert, but knowing something cerebrally and knowing it via sweating are two different types of knowledge. 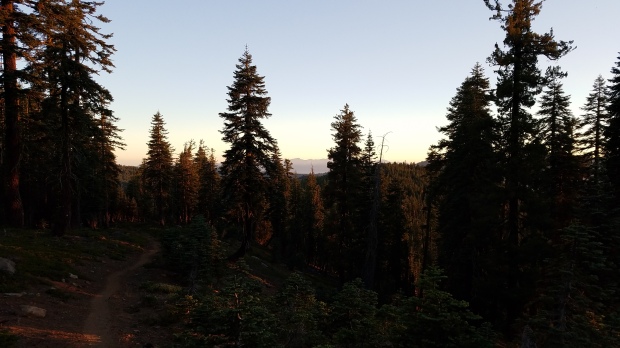 The hills here are nothing like the seemingly singular hill of yesterday – rolling, sweet and shaded, at least for now. 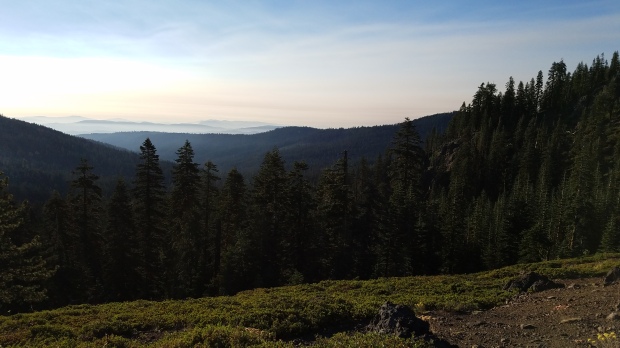 I come across a rocky, open hilltop, and panic – I almost did the unthinkable, that is, to roll up to the halfway point without downloading the obligatory “Livin’ on a Prayer” that I’ve been trying not to hum for the last couple of days. Thank god there’s service here, and I sit on the volcanic rock I’m still trying to get used to while it downloads.

Makes for some cool features, but it’s a little jarring after the granite of the Sierra.

It’s not long after that I cross Humboldt Road, run across Strider standing and talking with some folks in matching shirts leaning out of a van. Apparently there’s a crazy relay race going on here today, and this is the first checkpoint. There’s a hiker pile up,  as more and more of us roll in; we all talk and munch on snacks, and the people manning the point take pity on our jacked metabolisms and give us some strange, healthy, homemade endurance food. I’m a little suspicious about how well health food translates into the world of thruhiking, but I eat it anyway.

Pineapple and I chat about the morning and our nebulous plans as we walk away; the further away from the checkpoint we get, the more I can tell what effect that healthy food is having on my system. I stop to dig a hole and she keeps going; I hear Meerkat and Six go by, and wonder if I’ll see them at the next water.

Sure enough, there they are, sitting at the junction for Robbers Spring – Meerkat’s away, she’s run to get water for the four of us, and the rest of us get to snacking some more, sharing food with each other and with Meerkat, when she returns. It seems like we’re all feeling weird today; maybe it’s the desert, maybe it’s the halfway point, maybe it’s the health food. Still, it’s not something I can shake, even when I start walking.

And even when I see hilarious things.

The closer I get to the halfway marker, the more the time seems to go by – but the miles stubbornly refuse to do the same.

They make me the butt of their existential joke.

There’s just so much moving through my mind, most of it related to Canada, although I haven’t even made it to the halfway point. It’s almost August – do I even have a chance of making it to Canada? Should I be slowing down and hanging out with friends? Should I be speeding up? All of the same questions, and not a right answer to be found. Hike Your Own Hike – a blessing and a curse.

And then, a bunch of hikers sitting – and starting to clap.

I’ve made it to the halfway marker. 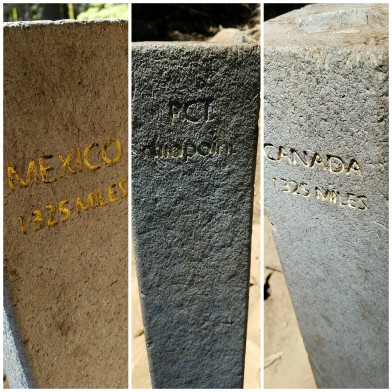 I cheer and hoot and holler, and the others sitting nearby chuckle and continue munching their food. I lead everyone in a rousing joint karaoke rendition of Livin’ on a Prayer’s chorus – we are, indeed, halfway there.

Everyone gets their pictures in, and then soon, too soon, it’s time to say our goodbyes. Meer and Six have folks they’re trying to meet in Etna, 200 miles away and about a week to get there – they’re trying to do the 100 mile challenge in the next three days, 33.3 miles a day. I think that’s pushing it for me, but I’m willing to try; still, I snap a good photo before they sail away into the afternoon, in case I never see them again.

I’m gonna see how the afternoon goes and call it from there, but Pineapple’s convinced she’s stopping at 30. I’m concerned I won’t see her again, too, but she’s more likely to catch me than I am to catch Meer and Six – she’s a trooper, and she’s supposed to meet her boyfriend in Sisters soon. I refuse to take a picture of her, because, I say, I’m gonna see her again. I’m just gonna.

Then it’s time for me to move along, too, see what these old legs of mine are made of.

I’m like a train; I keep on chugging along. All that momentum I didn’t have earlier today comes crashing down on me now. I throw in some podcasts to learn while I walk, and when I see everyone I saw before sitting at Soldier Creek, I fill up and keep moving. I don’t want to know what happens if I stop.

After a bunch of dirt roads and a strange meadow, I finally come across Highway 36, the crossing for Chester. Chester’s the first town I’m not going to stop in, and it feels weird to see other hikers hitching and to not be doing the same, but rather continuing on with my life. Continuing on to the other side of the road, anyway, because Piper’s Mom has left trail magic galore there for weary hikers headed onwards.

There are cold sodas and a pimped out hiker box and a load of trash and menus for places in town to entice folks to stay and bees, oh god, bees everywhere. I wander back and forth trying to escape them while a taciturn section hiker glares at me, even when I try to strike up a conversation. I consult the register and text Pineapple – I think I’m aiming for a 30, up the hill to the top for sunset – and, tomorrow, sunrise. I read the story of a hiker who had fun being stalked by a mountain lion nearby, and I freak myself out a little bit. Pineapple is barely a mile and a half behind me, although she thinks she’s going to stop at Stover Spring.

So it’s up, up, up, over dirt roads and through a ravine called the Dutch Hill Ditch. More roads, more up, until I finally hit Stover Spring where a bunch of people are camped. It’s pretty full – if Pineapple is going to stop here, I don’t want to take up her spot, and it’s still early yet. The spring itself is reached over a couple of boards laying over a minefield of mud, but the water is some of the coldest and sweetest we’ve had in a while.

Then it’s more up, through the manzanitas, where weird shapes lurk and dart and rustle through the bushes. One in particular comes out to stand in the middle of the trail – a badger, rather confused at my presence. I stand there for a minute, just staring as well, before I go to reach for my camera; of course it immediately trots off. I reach the top without much further incident.

I loiter up there for a bit – I’d be camping by myself, it seems, it’s already 8 – before I make the call. Even though I’ve already made 30 miles, I bet I can make 33.4, like Meer and Six were planning to. I don’t want to camp alone, but I don’t want Pineapple to camp alone, either, if she decided she could make it up. After hemming and hawing for a few minutes, I text Pineapple to tell her of my plans, and make my way down the hill towards the North Fork of the Feather River.

About two-thirds of the way down, I realize I’ve made a mistake, between the growing dark and the noises now grating on my nerves and my very, very angry knee. I’m not ready for this sort of mileage yet; I’m gonna make it tonight, but I’m not doing the 100-mile challenge any time soon. Consumed with thoughts of mountain lions, I’m relieved when I finally hear the running water and see the gentle glow of headlamps below me. I’ve made it. 33.4 miles. Holy shit.

I hunt around for Six and Meer’s tents, but I can’t find them. I bet they went on ahead. Womp womp. Everyone in this camp’s already turned in; these people seem to take hiker midnight seriously. I set up with my red light and try to be quiet, but I’m sure I’m loud – everything I do sounds like it’s being amplified. Once I’m done, I don’t eat, I don’t even write, I just get into my bag and pop a couple of Aleeve before I close my eyes and I’m out like the rest of the campsite.