In the morning, we lounge – we only have 20 miles to Belden, and we’re not in a particular rush. Meerkat brings me coffee again, because she is a goddess among women. How have I survived this long without coffee? Or without Meerkat? Or both? Eventually, I drain it, and it’s up and out and onwards to town – and this rave we’ve heard so much about.

We cross Bucks Lake Road pretty much immediately, then it’s up up up for the first climb of the day.

This is basically the only big up we’ve got today; there’s a fair bit of yoyo-ing in the middle, but the end of the day is all down into Belden. I’m excited about getting into town today, apparently – I’m feeling it, headed uphill quick as can be. The majority of the up is over before I know it, and it gives me views for the last little bits.

Six and Meer catch me, but break shortly after; Pineapple catches me, and the two of us head down to Clear Creek Spring. There’s a fence around it, and a sign that basically says “beware of cows” – it would, in fact, be a shame if any cows ruined this nice little source. Meer and Six join us after a minute, along with Aphrodite and Sour Cream, with their 7-9 pound packs. I coo over their ultralight kits, and start to wonder if I could cut anything from my pack.

Pineapple and I get to chatting, and basically bump into Meer and Six; they’ve got a bet going, and they want us in on it. They’re wondering if we can accurately guess what 3.3 miles of hiking feels like – no phones, no watches, no nothing to help. The prize? The two that are farthest away have to buy the closest two beers in town. In theory, I’ve got a 50/50 shot, and while I’m pretty sure Pineapple and I are getting played – there was much whispering and smirking before they asked us – it’s all in good fun, and I’m down for the chance to chat with them.

We’re enjoying a talk that’s alternately intense, alternately relaxed, alternately trail related and not. We’re all side-eyeing each other, wondering who’s going to call first, how far we’ve been. Meer calls a halt first, looks at our location on Halfmile while we all scrutinize her face for any indication as to how close we are. She holds up under the analysis well. Six calls second, and then Pineapple sneaks off to call third. I wait until it feels right, and then I stop – way, way the hell off. I stopped at 3.87, Pineapple at 3.67 – Six and Meer are the winners, at 3.21 and 3.16 respectively. Dang. On the other hand, we’ve done nearly 4 miles in just over an hour. So that’s rad. 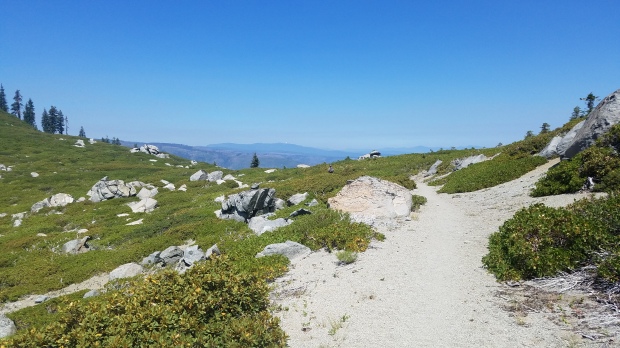 We’re also super close to our final descent into Belden – keep your seat backs and tray tables into their upright and locked positions, we’ll be on the valley floor shortly.

There is so, so much down. Pineapple’s off ahead somewhere, but Six is hanging out with me, talking about Florida and walking and and and – at least, until Meer comes blazing by. That woman is so fast! If only I were so fast. Six goes forth to catch her, and I’m left with my thoughts and oh hey, cell service. I open the 4G floodgates and call Spesh, have him walk me into the valley, at least until I spot Pineapple near the railroad tracks. I catch her as we cross, and we head off into Belden together.

“Into Belden” is basically into a building, around which people in various states of un/dress are setting up tents and frolicking and working to get this weekend’s festival off the ground. I head in to find Meer and Six, and since a Lannister always pays her debts2, I grab a beer for one of the winners, and Pineapple supplies the other.

We call the Braatens, the local trail angels, to see if we can sleep under a roof tonight, and Pineapple and I decide to stay with them; Six and Meer wanna check out what’s happening here this evening, which I get. If I wasn’t so interested in sleep, I’d stay, too. I like me some electronica, but I’m exhausted. Monarch tells us we made the right call, gives us the rundown, tells us there’s leftovers in the fridge. Rad.

It’s going to be an hour or so before Brenda makes another run down to pick folks up, so we make our way down to the river. Most everyone’s swimming, but the water’s so cold – or maybe it’s just me. I soak my feet while talking to a festival goer who’s been coming to this festival for years and years, learn a little about her life, about the family she’s made for herself out of this little community. I feel that. I feel that a lot.

5pm comes and while she’s apparently done runs between our call and now, she picks us up, and we have some lovely conversation on the short ride to her place. She shows us in and around, and we meet the other hikers who’re staying – Aphrodite, Sour Cream, and Snowman. I haven’t seen Snowman since mile 700 – it’s kind of crazy how that happens. We all chat while Pineapple takes a shower, then it’s my turn, and after I’m done I sit in the heat in my sportsbra and attempt to rearrange the food from my package and manage to stare blankly at the wall and vaguely contribute to the conversation going on around me.

Snowman cooks, and while it’s a strange amalgamation of things he could find, there’s a lot of green veggies in it, and I appreciate it wholestomachedly. Brenda brings cookies, and we all try not to act like the monsters we are when it comes to sweets. I chat on the phone with my Mom, download podcasts, and write until it’s entirely too late for our supposed 6am departure time.

[1] Could? Probably. Am gonna? Probably not. My problem is I like being comfy, and with the exception of a couple of pieces of gear, everything I’m carrying contributes to that comfort. I might consider not carrying a notebook or a windshirt next time, and I could *definitely* cut down on the number of pills I’m carrying.

[2] If we’re being really real, I consider myself more a Tyrell or a Martell.