I always feel like I’m the first one up. Probably because I am – everyone else is faster than me, and I feel like I need the headstart to get a-goin’, make it… somewhere. I don’t know what everyone else’s plans are for the day, but I’ve got that itch in my soul. I should’ve been gone yesterday, but this morning will have to do.

I try to be quiet packing up, but everyone’s slowly waking anyway, thinking about packing away things as much as going back to the Kennedy Meadows Resort, getting some breakfast. I ask after a sharpie, start making myself a hitching sign. My first try on my tyvek is abysmal, hard to read at 20 feet, but when I give up on trying to make it schfancy it’s legible, if not pretty. I wander to the road, and the third car stops for me. I should’ve done this earlier.

My ride is nice, and the ride is short, back up to the pass and to the first ups of the day. Feels good to be back. 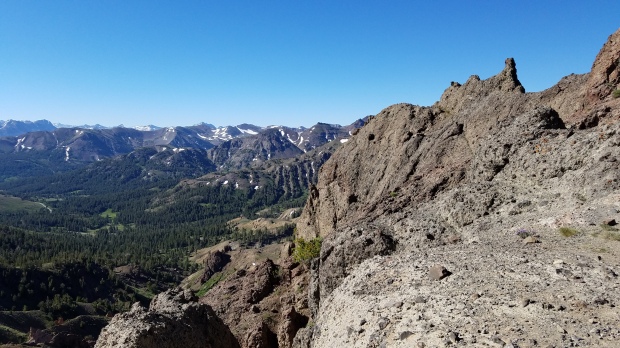 How different today from yesterday! Things are all jagged here, spires stabbing in to the sky – I’m pretty sure it’s volcanic rock, but I’m not sure. I’m getting closer to the Cascades, regardless.

At the top of the climb, I get the service I’d been hoping for yesterday, and I use the time to send emails, make phone calls. I feel kind of bad about it – I just got out of civilization, and here I am elbowing my way back in. But I’m done soon enough, headed down through patchy snow past a trail crew coming out of the woods. Thanks, guys!

The colors, Duke, the colors!

There are five miles of pretty much solely down, but I’m still having a time of it – I can’t seem to push myself faster than 2 miles an hour.

What’s worse, the lower I get, the more socked in by trees I get, until I feel like I can’t really see the beauty of the forest because all the trees are in the way.

Being a grouch almost gets me in trouble – I check my apps and find myself in the middle of a waterless stretch, and I’m saved only by the bonus water that’s all about. Thank goodness for late snowmelt.

I sprawl across the stream to collect water when the wind picks up. Eh, I’m sitting already, might as well grab my windshirt from where I unceremoniously stuffed it into my hipbelt pocket. But said pocket won’t open – my windshirt has tangled itself in the gaps of the zipper. I spend several minutes moving the zipper patiently back and forth, trying to disentangle it without ripping, but I don’t think I’m going to manage. I restrain my pique as I tear the smallest possible hole to free it. It doesn’t end up being small, but it is close to the armpit. Could be worse, I guess. Still, I’ve  officially messed up my second1 piece of gear doing something I knew I probably shouldn’t do – in this case, wadding up my jacket instead of putting it away properly. I was doing so well.

I’m staring forlornly at the rip when I hear “Are you okay?” from behind me. There’s another hiker back there, looking at me with concern. I’m confused for a moment, then consider my sprawled position, my torn windshirt in hand. I can’t help but laugh at myself. Yeah, I’m fine. 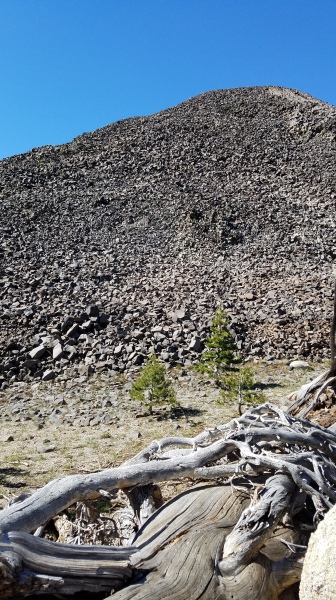 Lost and Found, when he passes me, is listening to Harry Potter and the Half-Blood Prince, which I only learn because he throws some spoilers excitedly in my direction as he passes. I ain’t mad, though – he’s one of the few people I’ve seen all day, and I try to scurry to catch up with him.

I manage at a water source down a small ravine, say hi to try to slow him so I can catch up, immediately slip and fall on my ass once I have his full attention. He smiles knowingly, says he did the same thing when he came down it. The act of kindness endears him to me greatly.

There’s a sign on the path saying “Asa”; we presume it means the Asa Lake junction, and a nearby camper confirms there are a few folks ahead – three people, two women and a man, were only going another mile. Lost and Found and I walk on together, and run across Shaka, Hammer, and Roadrunner camped near Wolf Creek, a fire already burning in the ring.

I think about moving on, but Lost and Found decides to stop, and the company is just too good to pass up. The only tent spots available are slanted and weird, and the wind starts to pick up as we settle in, but being warmed by a campfire and company is much preferable to shivering around my cold rice and beans by myself further on. I hope not to be squished by dead or dying trees as the wind gallops on through the night.

[1] The first being the leggings I ripped sliding on poky ice too early glissading down Mather.