My alarm goes off at 3:15, and it’s basically like Eye of the Tiger is playing in my head. I’m awake, I’m focused, and I am going to get up Half Dome for sunrise. I’m just gonna. There’s not a doubt in my mind. Weeell, enough of a doubt to push me up and out of my warm sleeping bag in the dark, stride over to fetch my bear can, pack up as quickly and quietly as I can. I’m out just before 4, right on schedule – and as I run into the second trail junction for Cloud’s Rest, it turns out I’d camped exactly where I thought I had. Everything’s falling into place.

Once I’m far enough away from camp, I turn on my podcasts out loud – I want all the critters in the area to know I’m coming. Once I actually turn onto the Half Dome side trail – here we go, up up up – hilariously, the Stuff You Should Know about cats comes on. Because of course it does. And it’s talking about their wild ancestors and their murderous tendencies and THAT’S QUITE ENOUGH OF THAT. I switch the episode to something a little less relevant.

The trail is pretty rough, climbing sharply for a while on the path proper, before leveling out before the climb up Sub Dome. I can see headlamps bobbing up the hill ahead of me, and it seems like I’ve timed it just about right as I begin my own ascent up Sub Dome.

It’s SUCH A SHARP CLIMB, all steps and slickrock on which I’m thankful my shoes still have a marginal amount of tread. I get off-trail once, feel like I’m leaning out into space because I am – there’s no trail off that way, and my pack would soon weight me off the edge. I manage to find the right way, get up top, stare over the saddle to Half Dome – and realize that I have made some terrible goddamn decisions this morning.

This is Half Dome:

I had no idea what I was getting into when I agreed to do this. I assumed that Yoda’d fill me in on whatever I needed to know, but being alone, I probably1 should’ve done some more research. I am carrying a pack with a liter of water, a bear can, and six days’ worth of food, weighing some 30-odd pounds. Maybe more. And it, and me, needs to go straight up this basically sheer rock face with only cables to help haul me up and 2x4s to rest on every 10-15 feet.

I vaguely remember being told to drop my pack somewhere, but the earliness of the hour and the focus with which I’ve gotten here – the sun still hasn’t crested the horizon yet – left my wits a bit addled. There’s nowhere to put my pack now, especially since this is an anomaly – the cables are never empty, the dome is never empty, which means there are a shitload of dayhikers on their way up, any one of which could decide to steal my pack or kick it over the edge for funsies. So either I turn around, having gotten this far, or it’s coming up the dome with me.

There’s a stack of gloves at the bottom; I’m too thankful they’re there to think about how gross they probably are as I start my way up the longest climb of my life. I have to stop every plank, huffing and puffing, the pack getting heavier and heavier. I’m opening and closing my hands as I rest, staring off into the distance, soaking in the views. I’m racing the sun, in theory, but it seems to be waiting for me, being patient with my fuckup, as I make my way to the top. It’s around this time that I realize that I’m not even doing the hard part, that I have to make my way back down, too, but one step at a time.

I make it to the top just a few minutes before the sun hits the dome:

And I get to greet the sun as it kisses the crest. 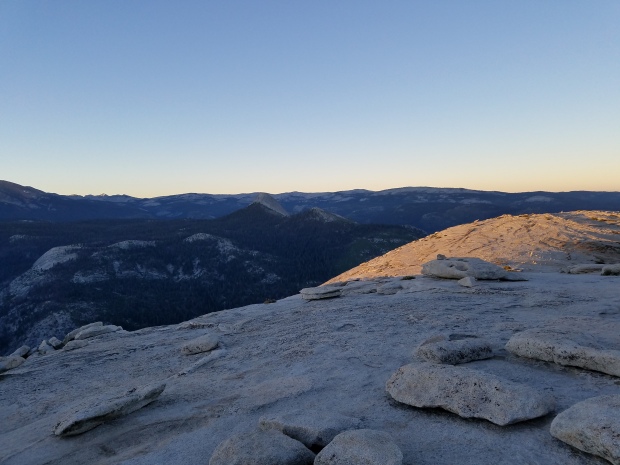 There’s a family up top too, and we trade photos as the chipmunks – how the shit did chipmunks get up here – dart in and out of their bags searching for food. Another gent comes up, looks around, smiling. 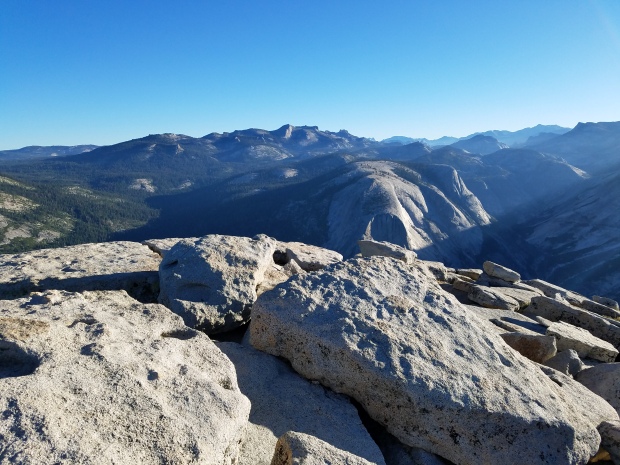 I linger longer than I otherwise would, because I am utterly terrified of the trip down. I don’t know that I’m strong enough. That my arms are strong enough. I could slip and fall and– Stop. Calm down. You can do this. I text Spesh anyway, tell him that I love him. That I may or may not fall off a mountain in my exhaustion. He texts me some kind of encouragement as the family makes their way down, and then… I guess it’s my turn.

It’s a terrifying descent, where my hands cramp and it’s literally living footstep by footstep, clinging to the cables, heart stopping every time I lose a little ground underfoot. My right hand slips once, and I actually think “Welp, this is it” – but I manage to attach it to the cable again quick enough to not fall. 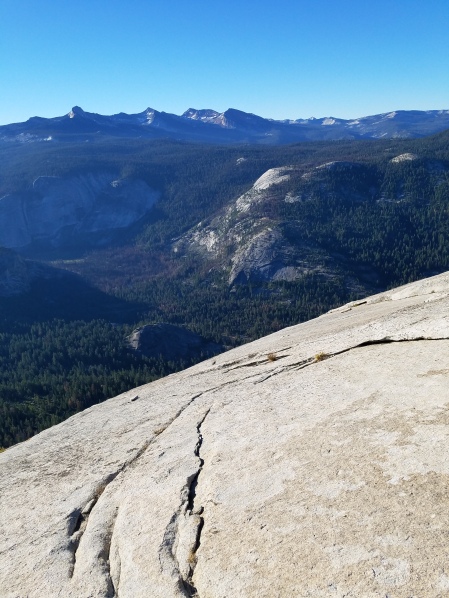 I get to the bottom and almost cry, but it’s back up Sub Dome, where apparently, I’ve attracted an audience. Among them, a lady who’s climbed Half Dome five times throws me some shade for being idiotic, and in this moment, I can’t blame her. I want to talk, calm my nerves, but she wants to climb. I should get off this damn mountain anyway.

Once off Sub Dome, I sit, eat, watch my hands shake with detatched amusement. That was dumb. That was maybe the dumbest thing I’ve done in my life. Literally. Eventually, I come to the conclusion that there’s nothing I can do about it now. Might as well keep walking.

Dozens of people are coming up now; I’m the only one on my way down, it seems, and I toss bits of encouragement to the others as I pass. It actually is all downhill from here for me, past Nevada Falls: 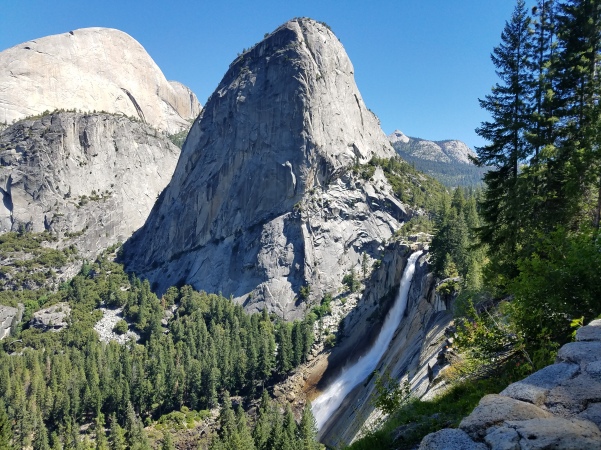 And all the way down to Happy Isles, in the Valley, where I feel positively suffocated by people.

It doesn’t get better the further I get into the Valley, walking down the road to try to find some food, some beverage, the bus. There are thousands of people, and I don’t know how to handle it. I get some goldfish and chips at the store and sit, bewildered, under an umbrella, wondering if I should get a pizza. Another thru wanders up, and suddenly things seem a little easier, and we chat until both of us need to wander off to do other things.

I browse the Visitor’s Center and the Ansel Adams Gallery, stand in a line to use the bathroom after two months of dropping trousers whenever and basically wherever. I buy and write some postcards, including a postcard to myself to commemorate the day. Outro and U-Turn are somewhere down here, and while I try to meet up with them, I fail to accurately read the not-to-scale maps to find them. The bus comes, and I convince the bus driver to let me on with my pack, curl up with it in my single seat on the full bus. It’ll be a cramped ride, but I’ll make do.

The bus winds willy-nilly up and out of the Valley, and I’m feeling vaguely ill at the sheer speed at which we’re moving. The hiker next to me is, thankfully, talkative, and he distracts me all the way back to Tuolumne Meadows. Folks are hanging out at the store, and I tell my cautionary tale to a couple hikers seated around. A climber who’s been summering in the park holds up two fingers, and I cock my head to the side. Apparently, two people fall to their deaths off that climb every year. Well. I’m glad it wasn’t me.

Back in camp, the Wolfpack is all cuddled up in a single tentsite . Everyone’s hiking out tomorrow, save Pineapple, who left yesterday afternoon, and Wolf, who’s on his way home for a wedding. He’ll catch up though – he’s one of the faster among us. For now, though, we sit around the fire, making s’mores and talking trail and everything and nothing at all. It’s a lovely evening, and we try to make it last as long as we can, throwing on layers on layers until the cold chases us to bed.