There’s a moment of disorientation as I wake to the sound of relative silence, before I realize where I am. Wrightwood, Reuben and Rachel’s. 7:30. I feel good, I feel strong, ready to hike. 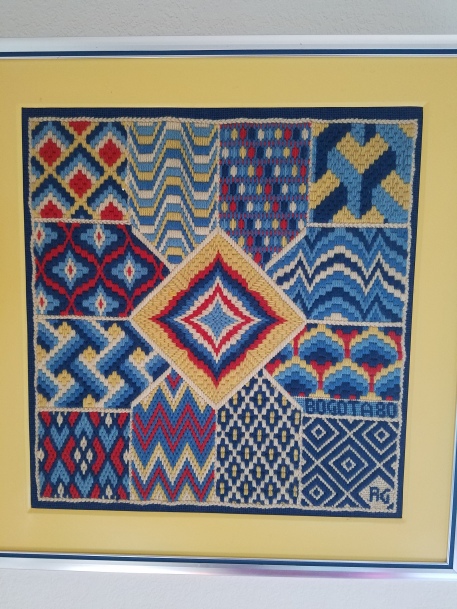 Reuben and Rachel offer us the run of the kitchen, but Sasha wants another cinnamon bun the size of her face, and I can’t say I’m averse to the idea. So we pack away our things, agree to meet Reuben after his appointment for a ride to the trailhead, walk over to the appropriately-named Cinnamon’s Bakery.

I think about getting something a little more filling than cinnamon bun, but they are indeed the size of Sasha’s/my face, and they just came out of the oven. Damn. No choice now.

It’s still warm, and I manage to pace myself enough to use a knife and fork rather than just stuffing it all in my face immediately. We chat with Blackout, Outro, Evac, U-Turn, and Yoda while we munch, consider going back inside for more day-olds. The cinnamon bun satisfies for now, so we steal Yoda and head for Reuben’s practice, with a quick stop for a flush toilet and also a hot dog from the gas station. So much for satisfaction.

It’s 10:30 by the time we’re on our way up the mountain, stuffed into Reuben’s jeep; 10:45 by the time we take pictures and say our goodbyes. We promise to send him postcards and thank him, again and again, for his generosity; he just brushes it off like it’s nothing. 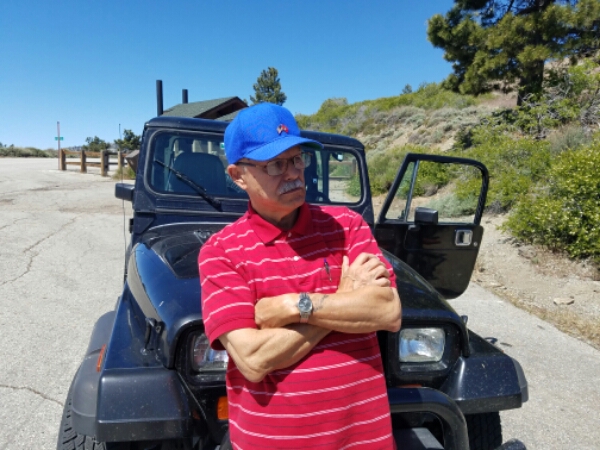 Then it’s off and away on an up that looks way more intimidating than it is. We’re at the Grassy Hollow Visitor’s Center – a mile up the trail – before we know it. 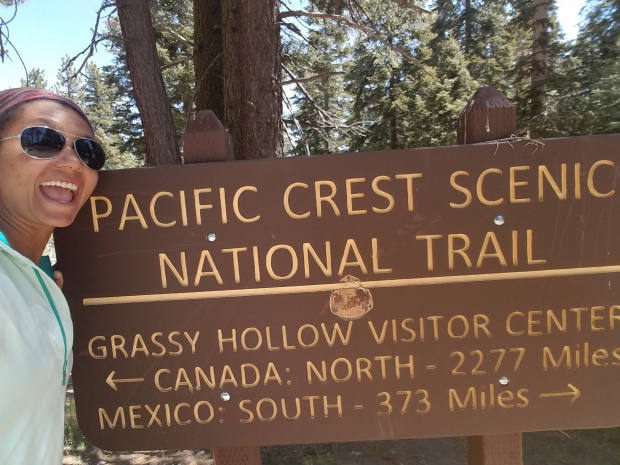 We’re excited to be rolling – we climb Mount Baden-Powell today, so it’s good that we’re feeling good. So it’s up and around and–

Down? Uh-oh. This mountain just got more fun.

We meet a bunch of folks at the Baden-Powell trailhead – Evac and Outro, Liam, Spaceman, U-Turn. Renei, who I’ve met once before. Liam tells a story about wonderful trail magic with giant bags of cheetos, and before I know it I’m singing “Pour some cheetos on meeee” as everyone howls with laughter. I almost get a trail name, but no one can work out quite how to turn that into one.

Finally there are no more dillys to be dallied, so we’re all off up the mountain. 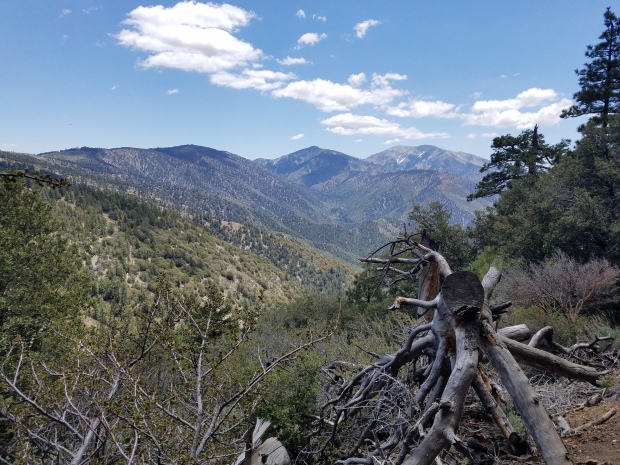 I’m terrible at pacing myself, so I’m off like a shot, passing lots of folks, but soon enough they’re passing me. It’s to be expected on a mountain, though, and I don’t mind. There are rest points at the turn of every switchback, and I utilize nearly every one and then some. But the weather’s perfect for this: cool, clear slight breeze. I’mma get up this mountain.

I come across Evac, sitting – she tells me we’re halfway through the ups! I commemorate the occasion by sitting too, taking her spot as she goes. Spaceman catches me shortly, sits as well to breathe. He looks at his maps and counts 23 switchbacks: 4 long, 19 short. So much for the element of surprise, even if my goal-setting heart is thrilled he counted. 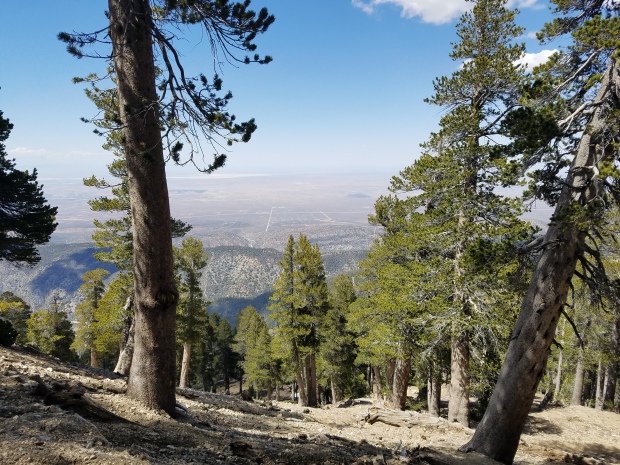 It’s a countdown to the top; I spot Sasha somewhere above me, yell a greeting. She yells back down “OHHHH WE’RE HALFWAY THERE”, so clearly, the only response is “OHHHHHHHH”, continuing the song as she turns to go. From somewhere else on the mountain, I hear, “LIVIN ON A PRAAYER”, and then giggles, echoing out from all over. Blessed are the thruhikers, for they’ve got your back.

Spaceman and I are still playing count-the-switchbacks when we run into a tiny snow hill! Practice for Forester Pass, Spaceman says, and I laugh and yip with glee as I climb up and slide down. 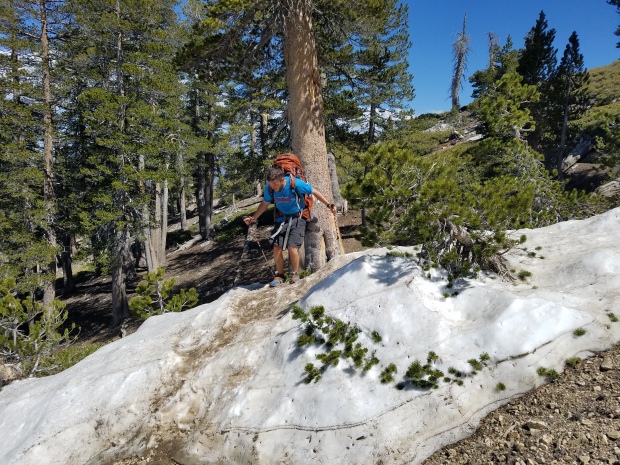 Switchback 4 in the countdown is the hardest, but the last one is the longest, taking us all the way over to the spur trail to the peak – .14 miles long. We toss down our packs, grab jackets, stuff oreos into our pockets and climb up. 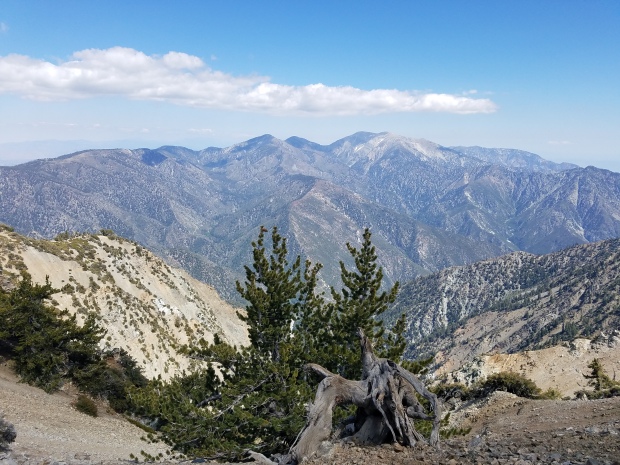 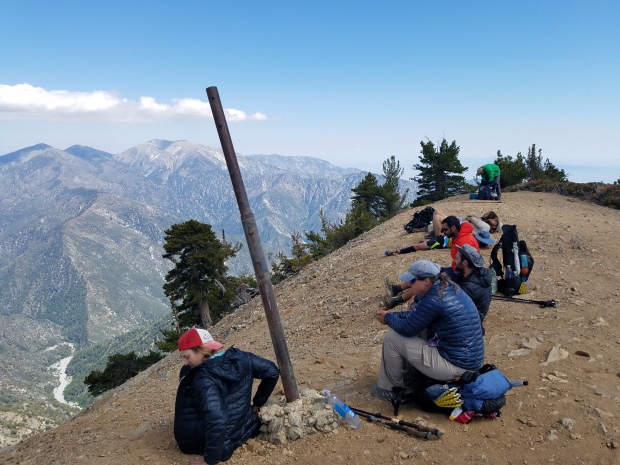 So many thruhikers on the peak! We sit and chat and stare at the world below us, marveling at the wind and the chill and how tasty food is when you’ve just accomplished something. We take ridiculous pictures and stunning pictures, loathe to leave.

We loiter at the register where I see someone has written in Hindi, though I recognize only one of the words. Then it’s back down, out of the wind, back to Wally, who has protected our packs steadfastly, standing vigil at the edge of the mountain where it’s stood for 1200 years. 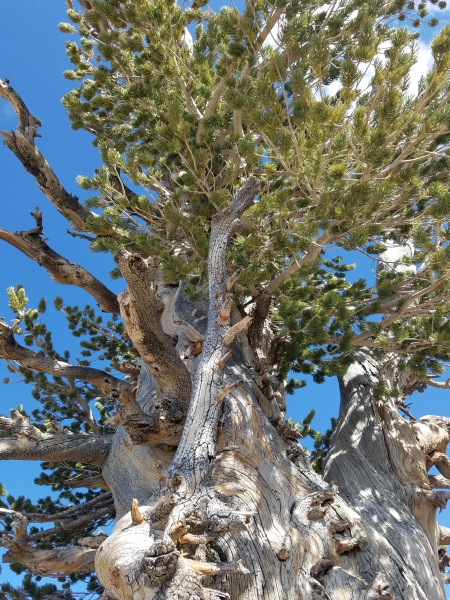 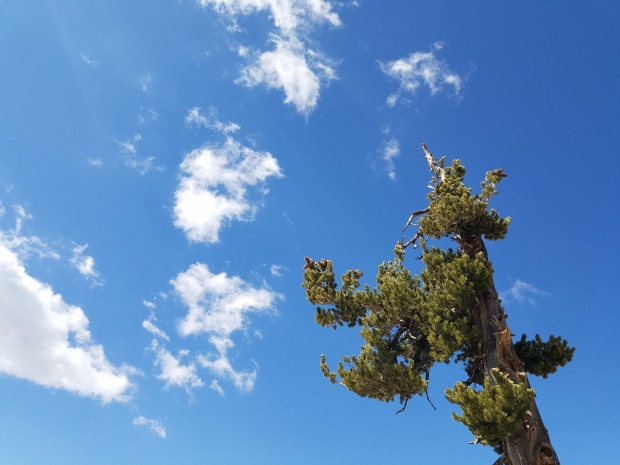 There’s not as much love for Wally’s cousin, Ted, though.

Then it’s down, down until my knees ache and I have to stop in what I note looks like bear country, all of my friends frolicked away down the hill. 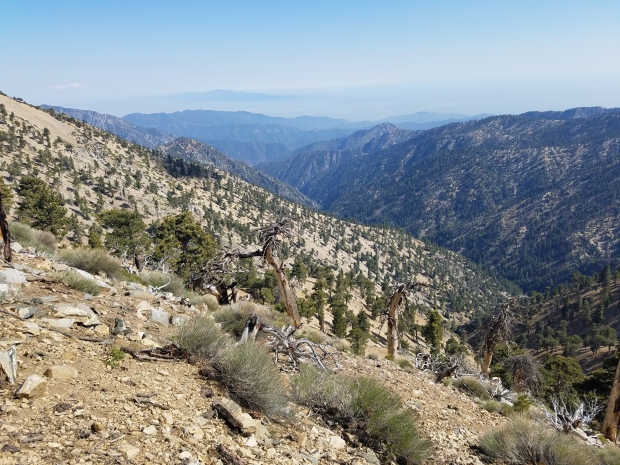 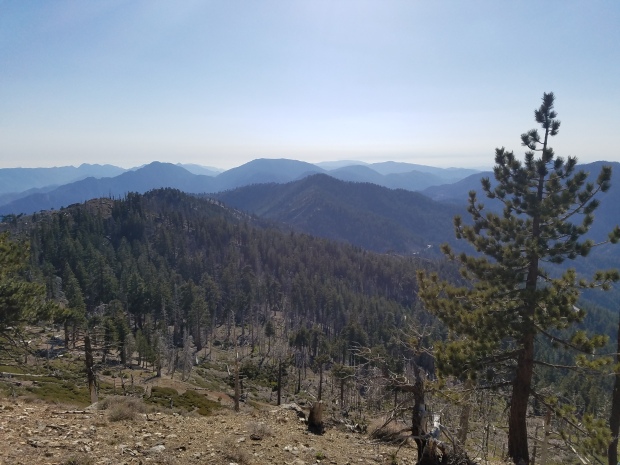 They’re all going to the Little Jimmy Campground – I had wanted to make it a little further, because it’s well-renowned for bear activity, but my body is suggesting that we be the hell done with today. So it’s down to the water, then one last short up to the campground.

As soon as I take my pack off, I know something’s wrong. My stomach is a knot, screaming in fury, forcing me into a ball. I don’t know if it’s going up or down, but I am about to be emptied. I manage to limp down to the privy just before I drop the illest deuce I have ever dropped in my life. The gentlemen whose tents are just outside joke with me a bit about the privys just having been cleaned. Prolly need to be cleaned again now.

Between the gain we did today and the sick, I’m wiped, but I manage to set up my tent and eat. Everyone’s hanging their food tonight, so I feel weird about sleeping with my food like I usually do1, but while we get most everyone’s up with Yoda and U-turn’s hangs, U-turn’s is too heavy and he ends up sleeping with his. I feel bad about it, but my exhaustion drives me to bed before I can properly apologize. I whisper a hope to feel better in the morning before sleep puts me in a chokehold and I tap into unconsciousness.

[1] My theory is that a bear, in areas that they stumble across food, will be more interested in a seemingly-unclaimed food piñata than it will be in messing with a human to get food.  Sierra bears/NPS bears are entirely different creatures, and I’ll be carrying a bear can north from Kennedy Meadows. (I also understand why the folks who’ve hiked the AT are anal-retentive about hanging their food, for much the same reasons.)