I actually sleep okay on the tiny couch, having alternately put my legs up and stretch them out as necessary through the evening to keep comfortable. Still, I’m up early – normal hiker time, 5:30 – but not a creature is stirring in the house, so I doze for a little, then sit up and write. Might as well be productive. The brave souls who slept outside are hankering to get in, but respectful of everyone’s sleep.

A the house comes to life, breakfast is the first order of business – sausage scramble with country potatoes and pancakes bigger than my face. I help as much as in allowed with the cooking, and it all turns out lovely. We’re being spoiled, and we know it. 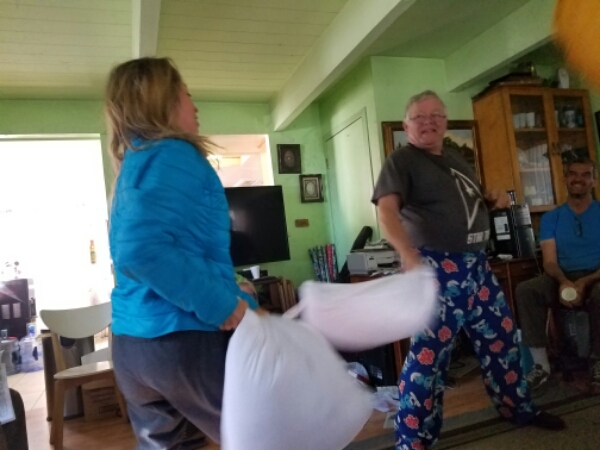 Also there is a pillow fight

Then it’s packing for us, showering for Papa Smurf and Mountain Mama – one takes longer than the other, and we idle about while we wait for them, trying not to be impatient. They’ve done so much for us, but we’re antsy to get to walking.

Soon enough, they whisk us back off to the trail – we say our thank yous and wish Papa Smurf, our driver, well, and they’re off to help more hikers.

As Greg is much faster than me, I’m alone soon enough1, winding my way up the slope. 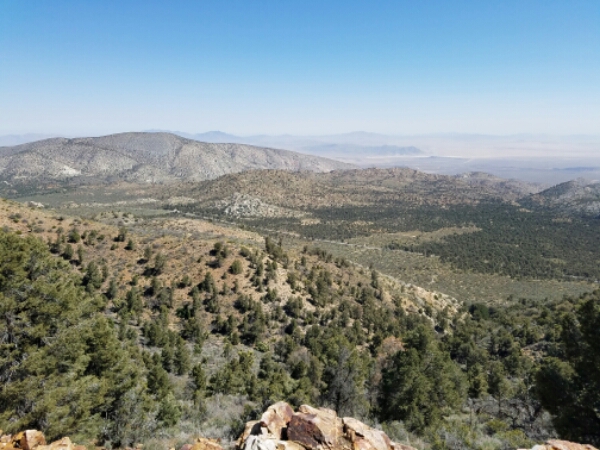 The morning is cool, but the sun is nice, and I’m making good time – right around 3mph for a while.

I’m following those weird tracks again – okay camels in the alpine region sounds even more ridiculous than camels in SoCal – then, through the trees, I glimpse furry creatures, and it clicks.

There are four on leashes and a baby who won’t stray far from mama, as well as their four very patient humans who amusedly deal with my oohing and aahing and attempts to pet the cat/camel-like critters.

Her face is perfect. The llama's, not mine.

Then it’s onward and upward, to well-tended trail and… Wait, I feel like eating lunch? Nom.

The llamapackers pass me while I’m eating; I catch them shortly after, and say what’s probably my final goodbye. Still, I’m happy that, for at least a short time, there were llamas. Yiss.

Once I’m up-up, above the Big Bears, it’s actually quite a nice view of the cities across the lake. I’m sharing it with a lot of dayhikers, including one that mean-mugs me when I say hello. How can you be angry today? It’s the weekend and the weather’s beautiful and there’s a view. And you’re alone. Why would you choose this if it makes you angry? Hike your own hike, I suppose.

So many dayhikers! Including one that’s worried about getting home in time to be warm. It’s supposed to get cold again tonight – 28F, a degree warmer than last night – and he doesn’t have a jacket. I hope he makes it back.

The PCT meets the Cougar Crest Trail, and all of a sudden the dayhikers disappear. So strange to be alone after being around people basically all day!

One of the people who passed me  this morning, Tanya, is a bit ahead of me, and then I’m a bit ahead of her, and then my left ankle starts screeching and I slow way, way down. There’s a trail camp just before the site with water that I’d planned on stopping at – if that ankle, the one I’ve repeatedly pushed to almost breaking, is getting grouchy when it hasn’t in 280-ish miles, I should probably stop. So it’s babying my ankle down, down, down into Little Bear Springs.

There are a couple gentlemen there I’ve never met, one of whom has started a fire to fend off the bitter cold. V-Dub, who pulled in right before me, is wrestling with her tent after having used a bivvy prior to the chilly evenings, and Tanya, who pulls in right after, sets up her Rainbow quick as a wink. Nightcrawler’s the last of our evening’s merry band to arrive, and she sits snacking until the first half of her namesake is well upon us. I retire when the wind gets too bitter, settling in for another evening of howls and sighs.

[1] Well, kind of, I find out when I stop to pee – seems like everyone got dropped off around the same time. We all spread out soon enough, anyway.