We’re actually out around 7, on account of the Sawyer Mini taking a figurative epoch to filter water1. It was really nice the other day when we ran out, to be able to drink immediately, but I think long-term I’ll stick with my Aqua Mira.

Sasha isn’t feeling too hot this morning, so we agree to meet at Ziggy and the Bear’s – the local trail angels hosting hikers – if we don’t meet before. Then it’s off on the long down.

Everything we gained yesterday morning, we’re losing over the course of the day, headed down from 7,000 feet to 1,000. My knees are going to looooove this.

It’s more chill than I think it’s going to be, if getting warmer by the minute and/or foot of lost elevation. Still, there are a lot of folks out – I get caught up chatting with Sampson the Bear, then Joe, Sarah, Katie, and Dom catch us, then Sketchpad, then Wyoming, and soon there’s a train of hikers talking their way down the trail.

Feeling self-conscious about the care I’m taking with my knees ankles feet, I move progressively towards the back, til this caboose became unhooked and she was alone again. I pass several folks having second breakfast, but they pass me when I have mine.

Even Sasha passes me – I don’t hear her behind me and I’m singing all the sea shanties I know, and not exactly quietly. I apologize; she just chuckles at me. It’s no big deal, apparently.

I stop just after mile 2002 – it’s hot, there’s a load of sun, I’m tired, it’s naptime. Or at least take-advantage-of-this-tiny-piece-of-shade time. I write, call my mother, chat with passing hikers. My spot is not conducive to actual sleeping, even of the creative thruhiker variety3. 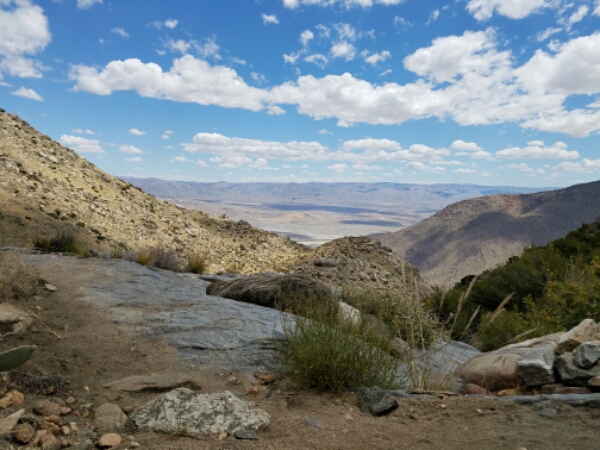 A lizard poses for me on a rock; I tell it I’d like to take a picture to make it internet-famous when that buzzing noise that is definitely not hummingbirds registers. WALK WALK WALK GO GO GO NOW NOW NOW.

I run into Sasha not that far down from the bees, in a much better napping position than I was. She’s just waking up to get a move on, when a cloud rolls over the sun. TIME TO GO gotta use dat cloud cover whenever possible.

It doesn’t last long enough, and it seems all the other clouds are scared, shying away from the sun at the last minute. There are a few brave ones, but mostly we’re just forced to skip from rock shadow to rock shadow to catch our breaths in the heat.

Lower and lower – we see the water now, and the folks milling about it, and even though I think I have almost enough to make it to Ziggy and the Bear’s it’ll be nice to stop.

Bambi and Peanut Gallery are there – I first met them at Warner Springs; a couple with a lot of sass and my sense of humor, I adore them, and the longer we talk, the more my adoration grows. Bambi has a blister with an infection that’s trying to snake it’s ugly way up her foot, so she’s looking forward to being at our destination already. They pack and go before us; we chat with Eric and a couple of the others before we’re ready to go ourselves. I pack out a ziploc of lip balm and some other stuff that someone left behind as we go. 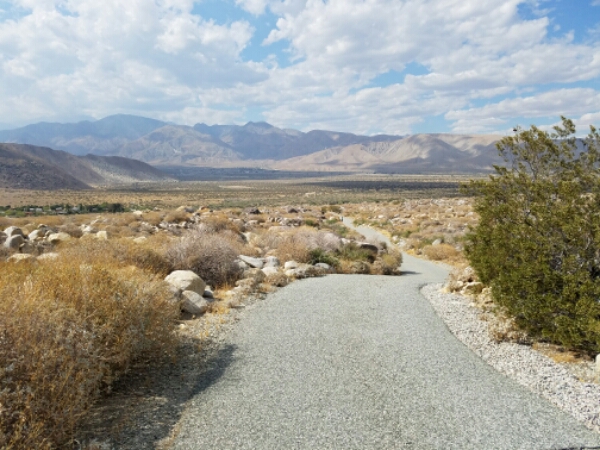 Apparently, it belongs to Présenté, because here she comes, sans pack, dancing up to me asking about it – she’s walked an extra mile of road to get it back. I’m happy to return it to its rightful owner, and oddly wistful as she airplanes off through the wind, arms out, effortlessly enjoying walking and the day and sunshine and being. It seems a very thankful gesture, but maybe I’m reading too much into it.

We catch Bambi and Peanut Gallery as we switch from the roadwalk into the desert floor-walk, and Peanut Gallery and I belt Don’t Stop Believing and I’m On A Boat at the top of our lungs to entertain everyone ourselves. They’re moving slower, though, on account of Bambi’s foot, so we leapfrog through the flat up to I-10.

Sasha gets a burst of speed under the underpass and is gone; I loiter with Eric and a couple others before the last push to Ziggy and the Bear’s.

It takes longer than I think it should, but suddenly, hikers and handwashing and pictures NO POSING oh my! Ziggy and the Bear are super kind, even though I’m number
13364 this year, holy hell. We all get Little Ceasars pizza for dinner and cowboy camp inside their fence, where the wind tries, albeit less successfully than out on the trail, to rock us to sleep.

[1] I had used it literally once before; it just takes too long. Maybe it’s just the Mini. Maybe I’m just impatient.

[2] The Guthook one, then the stone one, not the post a ways further on.

[3] Though I imagine my flexibility/creativity will improve as time goes on.

[1] ONE. ONE OFF FROM 1337. As an avid internet user in the dialup days, that was a missed opportunity. (For you non-nerds, 1337 was a techy way to write leet, as in elite, back in the day. One of those weird early internet things.)