I enjoy cowboy camping, with the swirling stars and the traveling moon and the warmish evening. I’ve got my alarm set for 5, but someone walks past me at 4:30 and then again at 4:45, headlamps in my face1, so I just start getting up. It’s easier to pack when you’ve been cowboy camping, so I’m out basically by 5:30.

Sasha, the lady who pulled in with Ayesha, and who I’d been leapfrogging with yesterday, catches me pretty quickly. I’m pretty sure she’s faster than I am, but she hangs around to chat coffee and the barista life and life in general. 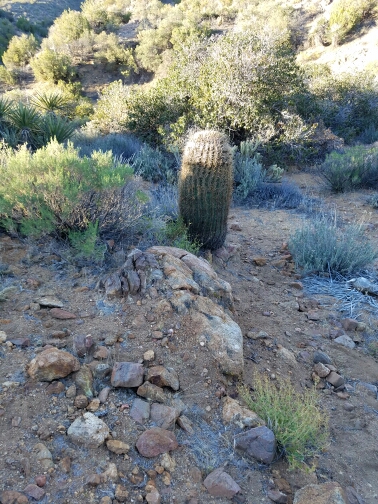 Also, we both love barrel cacti.

There isn’t supposed to be much water beyond caches today, but we find Kennedy Meadows Tom and a section hiker at the apparently-flowing Tule Spring. We have enough water, so we don’t go to investigate for ourselves. 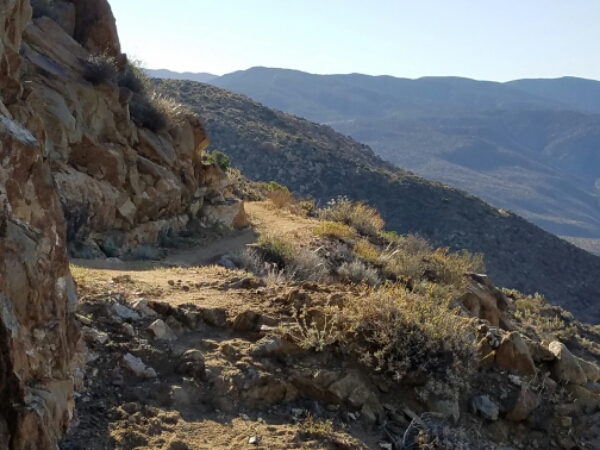 We see notes on the trail before our first cache – telling us the locals are in the MMJ business and don’t like hikers. From the stories we heard at Mike’s, guns have been pointed at hikers, and fired into the air to scare hikers off of an evening. Poor placement, guys.

We catch Spirit Guide – and who I think is Ryan2 – leaning up against the first cache, tanking up for the day.

There’s another cache in a few miles, and Sasha and I talk our way there. This one’s a little more involved, with a little free library and a surfboard register. There’s also still-icy water – the woman who stocks it was apparently just here. 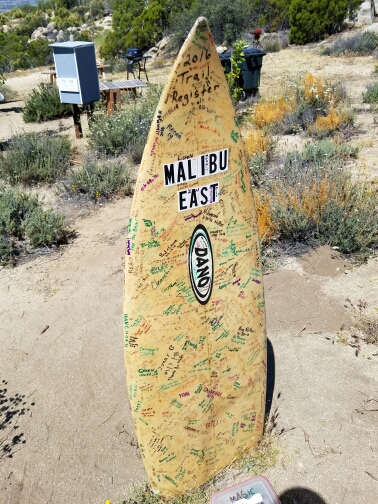 I sneak off to take care of my bowels, and by the time I come back, Sasha is gone. Wanting to get a move on in the heat. I get that.

I make it probably a couple miles past the cache before I’m looking for shady spots to curl up in. One’s okay, just off-trail in growing shade, but the second one I come across – a depression the trail curves around, thoroughly shady – is perfect. I sleep for an hour and enjoy every second. 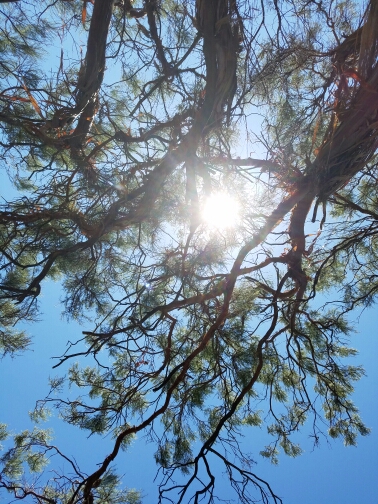 But the burgers at Paradise Valley Cafe – the best burgers on trail, or so everyone says – are calling, and soon enough I’m up and out again.

The trail is open and hot in this section, sloping upwards towards the cafe. So hard to climb in the heat! I pass a couple former AT hikers and then they pass me, because the up and the heat make it hard for me to deal. 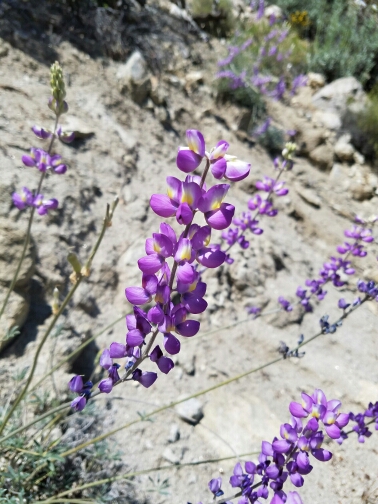 And for Sasha, apparently, too – I catch her in a shady bit of trail, nearly slurring her words in the heat. She says she’s okay when asked, but she’s moving about my pace and she’s fun to be around, so I tail her along the ridge and up the last climb.

And then, the road!

We roadwalk part of the Palms to Pines highway, not knowing there’s a trail to the cafe that’s safer; hitch a ride while California drivers show they’re kind of crazy. Then burgers, sweet, sweet burgers. Also, milkshakes!

There’s a detour ahead and Sasha and I have decided to walk it – we’ve bonded today. Sweep hands me an extra map, since I didn’t know it wasn’t a part of Section B, and then leaves to get some miles in before dark. We prep to go too, but it’s getting late and there’s not supposed to be camping for a few miles after the road. Sasha and I agree to get up early to beat the heat.

The restaurant lets about 20 of us sleep on the ground, so I cowboy up on the porch under the streetlight, the laughter of the hikers distracting me until I magically get the earplugs right and can finally sleep.

[1] I suppose that’s my fault for sleeping with my head towards the trail.

[2] Although that would be a good guess – there are so many Ryans and Brians on the trail around me. There’s a Brian B., a Brian C., and a Brian D. that I know of. 23 letters to go!