My tent isn’t pitched quite as taut as I’d like it to be, and so it’s flappity flap-flap all through the cloudy night. I’m still convinced that my stupid ears won’t fit my stupid earplugs, so I deal by being vaguely annoyed. I’ve set my alarm especially early this morning, to make up for the deplorably small number of miles I did yesterday, and when that buzzes I’m actually pretty surprised to be rested up. The sun’s barely up over the horizon, and I manage to crawl out and pack and grab some water from the now-seemingly-clearer trough and hit the pit toilet and the trail by 6:05am.

I’m hoping to to do at least 17.6 miles, to move fast enough to catch Jerry and Ylva, the German couple who wanted a ride into Idyllwild yesterday – I thought they’d be stopping at the Sunrise Trailhead for water, but they didn’t, apparently moving on along to 64.1 where I said I’d meet them. I try to think of what to say to them beyond “Oh god, I’m sorry, I fucked up, I should’ve tried harder to tell you”, but I don’t really get much further than that. Also, telling them such requires that I catch them, and they’ve got at least a five-mile lead on me. 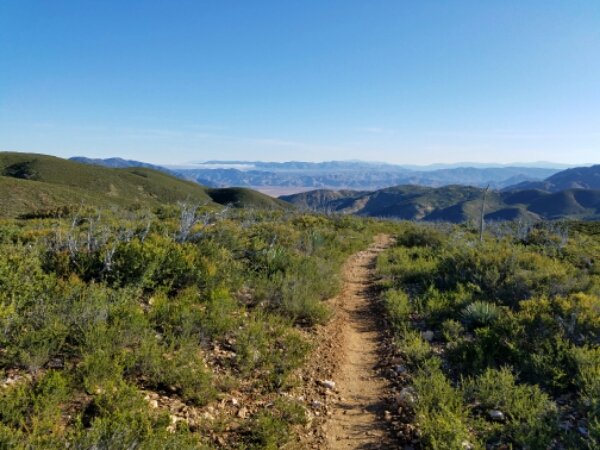 It’s a lot of down today, followed by a little up, followed by a lot more down – not a lot of variation to today. I’m a little concerned, as my cranky arch tends to like the down way, way less than the up, but it seems to be holding steady.

I stop for lunch at the Rodriguez Spur tank, spread out my tent and rainfly to dry, wrassle with my tent poles when they try to be entirely too helpful. I try to use my Sawyer Mini to quickly filter some water, but it seems as though the Evernew bottles I got specifically for the purpose don’t fit – leaking out at the attachment point. I could’ve gotten Platypode for a lot cheaper, but noooo those threads don’t quite fit, the internet said. They’ll leak, the internet said. There’s a lot of cursing – I figure that they maybe fit the Sawyer proper rather than the Sawyer Mini, which is some shit. Oh well. Aqua Mira it is, for now.

I take a long lunch before taking on the descent to Scissors Crossing – I’ve read enough blogs to not-quite-remember what’s up with it, but the name and the vague memories leave a sour taste in my mouth. Soon enough, I know why. 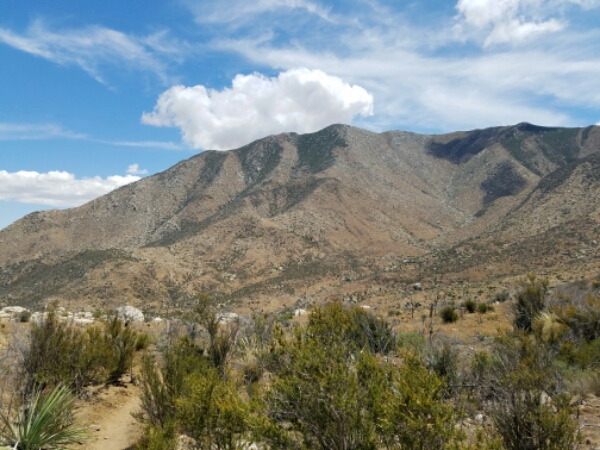 I stop to give my Mom a call, remind her I’m still alive and kicking. Dom catches me in the meantime, tells me Joe and Sarah had to hitch back to Laguna to trade in Joe’s boots for some trail runners, and then they’re hitching to Julian to stay for the evening. We leapfrog a bit back and forth before deciding to take a break on some slanty rocks. She immediately takes her shoes off, puts her legs up, kicks back on her pack to chill. Best idea. Crazy intuitive. 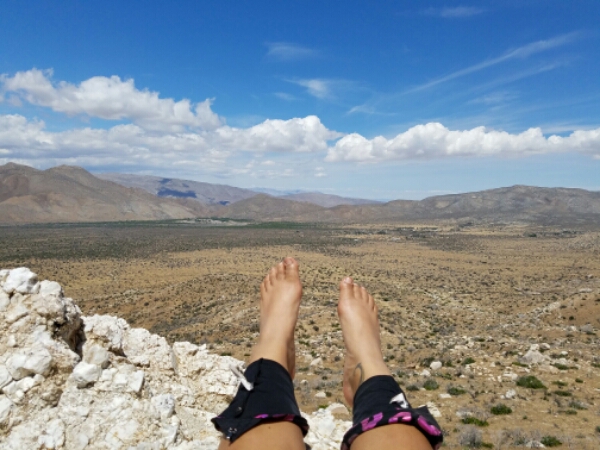 And then it’s down, down, so much down, my knees are goo and my feet are threatening mutiny and Dom disappears into the distance, hiking on seemingly tirelessly.

That’s Hardtime, but you get the idea.

After a break for my feet and again for my bowels, I pass a cache, and finally, the road. And oh hey, Jerry and Ylva, walking to the RV park for water – I stumble out an apology that they brush off, smiling, knowing that the stores probably would’ve closed before they had a chance to resupply, anyway. Aaaand then another short stretch gets me to the underpass at Scissors Crossing proper, mile 77.1. I’m not going any farther on my own two feet today.

Katie’s there, and Hardtime, who passed me earlier, and both of them are ready to hitch, so I don’t even take my pack off before heading up to the road. I’d like to make it into Julian and back out tonight – it’s 12 miles from the trail, but it’s kind of sort of the last water until the Third Gate Cache 14 miles on, and I’m pretty much tapped1. So it’s hitch hitch hitch – the second car stops, but is turning too soon; it takes an hour before another car stops and has two places. Hardtime was first, but he gives me the slot, and soon it’s Katie and me hugging my pack and WHOOSH all those miles I just walked today gone in 20 minutes, and we’re back up into the Julian cloud.

Katie’s staying for a zero in town, so I’m on my own as I scurry to the store for water and impulse salami, snickers, and naproxen sodium2, then it’s flush toilets and standing on the outside of town dancing and belting Ain’t No Mountain High Enough in a perhaps-misguided effort to get a hitch back down. I’m starting to worry I tarried too long in the bathroom when a family stops, despite the fact that I probably look a little crazy, and then it’s trying not to be ill on my way back down as the sun sneaks back out and we chat about life in Julian.

We make it back to Scissors without incident, and I settle in under the underpass with severak other hikers to escape the worst of the wind’s cries. We talk to drown it out until the sun goes down, and by then we’re too tired to care about its howling.

[1] Also, we’re not supposed to rely on caches, and Barrel Spring’s at 101.1, so I’m really looking for enough water to get me there.

2] Blessed, blessed Aleeve. My gooey knees will thank me in the morning. I hope.