My alarm is set for 5:30 – I want to beat the heat for the climb out of Hauser –  but someone else’s alarm goes off loudly at 5:15. I try to roll over but soon the whole camp is alive with movement, unpracticed hands packing up camp slower than what will probably be usual. It takes me a full hour to get out of camp, but I’m off and moving at 6:30.

It’s a hazy morning – so much the better for this climb, three miles, a little respite, then a bit more of a climb before the descent into Lake Morena. As I’m climbing it’s way, way easier than I think it should be. The trail is beautifully graded, and even with the clouds there’s something of a view. 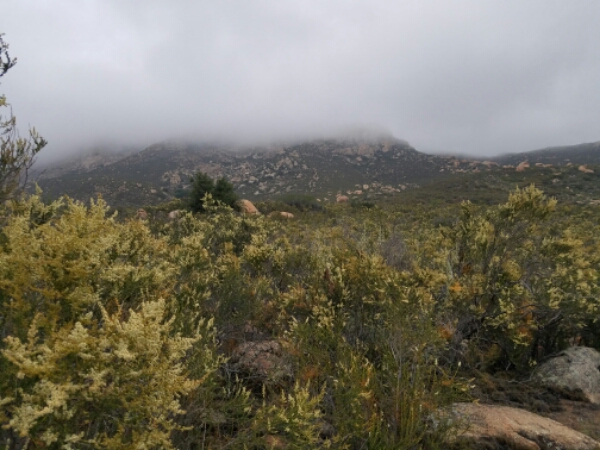 How well-loved this trail is, to be so well-graded, so well-designed? I mean, I’m only in the first 20 miles, so maybe the whole trail isn’t like this, but it seems to me that of the triple crown trails, the PCT is everyone’s darling. What a wonder that is for those of us walking! 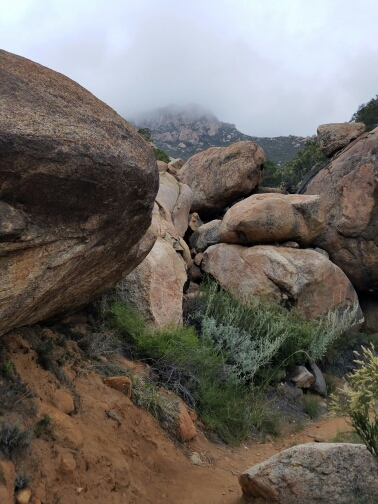 On my way up, who do I meet but another brown person! Rich is from Hawaii, and seems really nice – I mill about to chat for a moment, but the cold and the prospect of the heat, once this cloud cover burns off, pushes me onward. Dom catches me, and we huff and puff upward in companionable silence, interspersed with amusement. 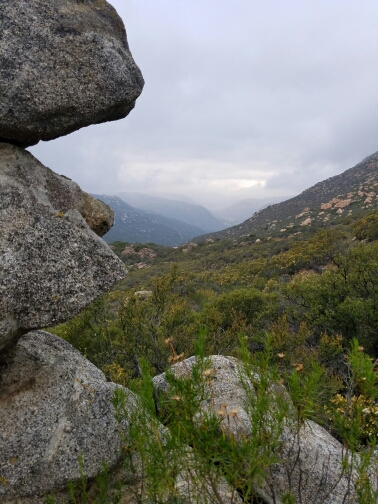 Soon, the territory starts looking familiar – Spesh and I climbed up here two years ago during Kickoff to get the lay of the land, and I remember one rock formation and trip over the same rock in the trail and then, Lake Morena! 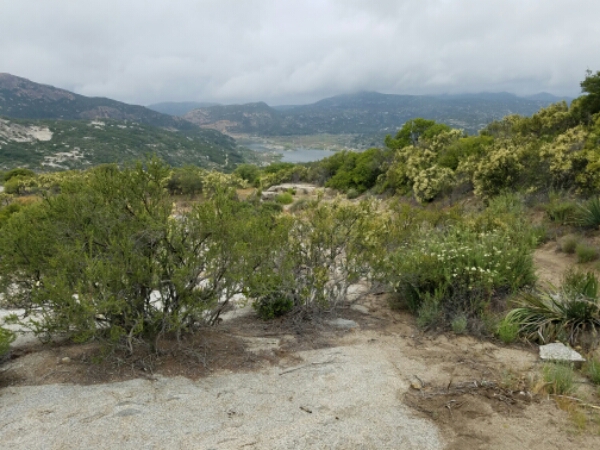 Dom and I basically skip down the downhill and soon, we’re at the campground.

The first thing we do is go get quarters for showers – they’re coin-operated now – and the ranger looks unamused as we take 16 quarters from her stock. We sign the register, rifle through the hiker box1, and then take showers/do shower laundry before our time runs out. Maybe it’s absurd to shower on day 2, but being warm and clean feels amazing.

We’ve also decided we need breakfast, so we head down to the Oak Shore Grocery, where we see Joe and Sarah, who shared our campsite last night. A new friend, Sherry, is also there, eating a burrito the size of her face. I decide I need one, and before long I’m happily munching away, chatting with hikers and locals between bites. One of the locals recommends Murray’s in Big Bear – he also has a place up there – and I wonder what kind of place it is. It has karaoke, so maybe it is my kind of place, who knows. I store it away in my brain for later.

Aisha from camp rejoins us, and we talk about being stoveless and blogging2 for a while before it’s time to hike on. 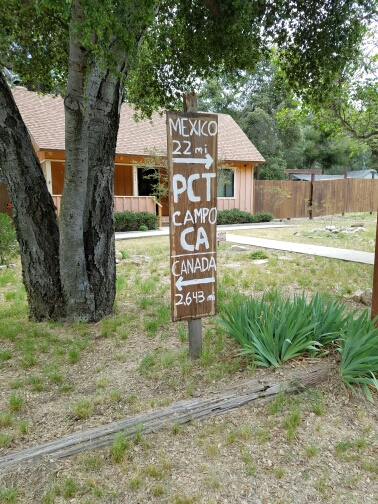 Aisha’s so fast – I’ve been pulling about a 2mph pace, and when she turns on the afterburners she by me. “My whole family walks like we’re being chased,” she calls back to me. I resist the urge to increase my pace – it’s not a race, and trying to keep up with someone is the fastest way to an injury/not fun time – but I wonder if I’ll ever see her again. It’s like that sometimes, I’m told. 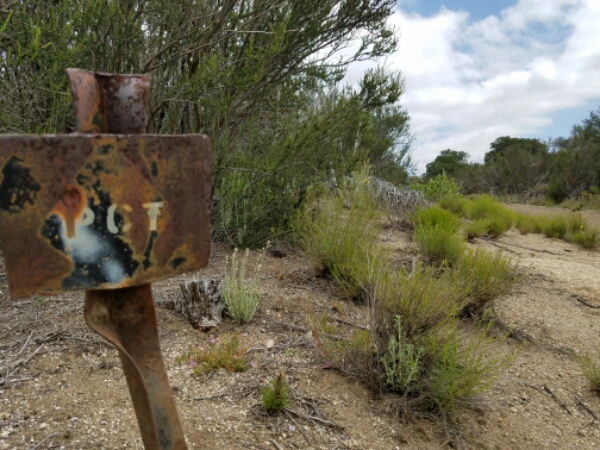 It never really clears off; the clouds linger and meander and that’s fine by me. Makes it a little easier than yesterday, even if the tread is mostly sand3 and the trail tends mostly up. 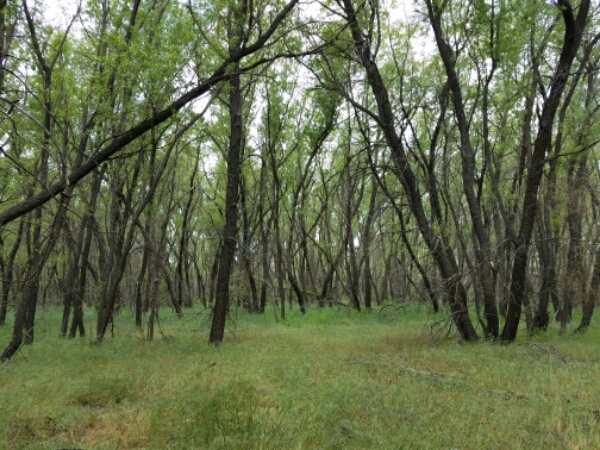 I’m kind of astounded at the rapidity with which the landscape changes – first only bushes and now trees, tall trees for shade, if it were sunnier.

A bunch of folks are eating and taking care of blisters under the first overpass, because those are the kinds of things that go together out here, and I sit and feel kind of left out – I only have one tiny blister, but I do manage to put down some food. 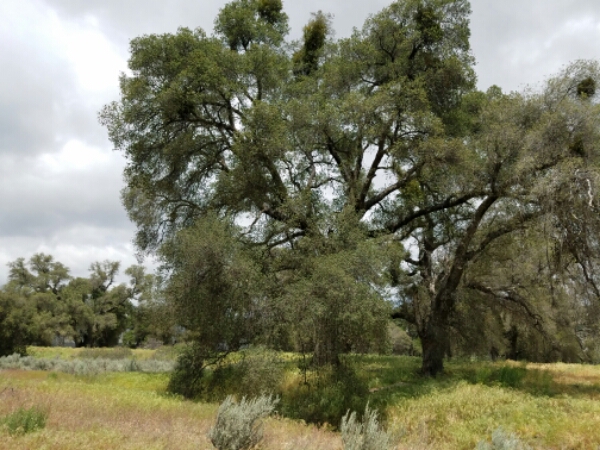 It’s not long after hiking out that I see a large snake on the path – no head, just a body moving across the path, and then the telltale rattle at the end. Dom’s right behind me, and we stop as it slides to the other side of the trailside bush and coils up, but doesn’t rattle. WAT DO. Apparently, it thought it was hidden enough, and we manage to slip by without incident. We wonder aloud how many we’ve passed unknowing. 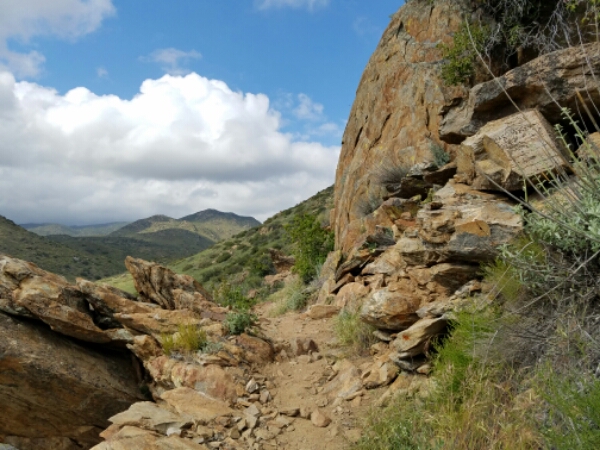 Up and around, through the Boulder Oaks Campground, across one highway and under another, all while going up up up. I’m singing the entirety of Aida the Musical to distract myself from the last of this 16-ish we’re trying for today,  since there’s a nice campspot at 32. We catch Katie and hit one last road before the last climb. 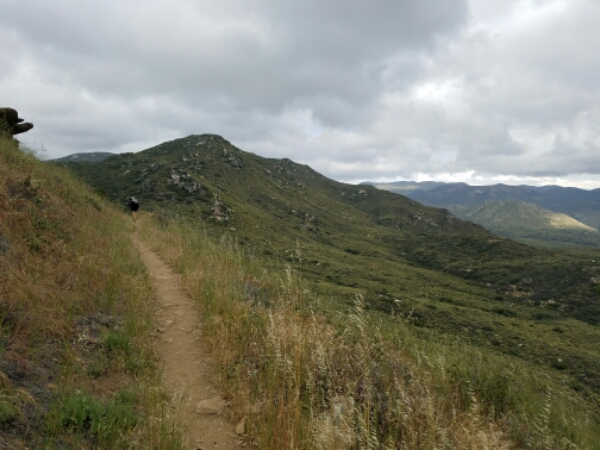 We pull in as I finish the last line of the last song of the musical. A little celebration is in order, so I have a nip of bourbon and offer it around, but no one wants it. It’s supposed to rain tonight, so priority one for most folks is getting their shelters set up, very srs business. But then that’s done and dinner’s ready and more and more people roll in, and once again we have ourselves a convivial evening atmosphere that it’s hard to retire from. We do though, hushing away at 9pm, hoping we don’t wake up wet in the morning.

[1] A Hiker Box is where folks dump stuff they don’t want and look through for stuff they do. Someone left a huge hardback moleskine in there.

[3] Sand is rapidly becoming my least favorite kind of tread. That or the mid-sized pointy rocks underfoot tread. The PCT overall so far has such good tread, though.