The shuttle back to the trail’s supposed to leave at 8am; someone’s alarm goes off and I’m about 1000% sure we’ve missed it. Still, nobody moves, so I’m sure as hell not gonna. I luxuriate in the bed and the pillow as long as I can before finally getting up, one of the first to do so. Turns out it’s only 7am.

As the first up, it’s me who starts the chain reaction that develops into a frenzy of eight hikers scurrying this way and that, gathering things and sorting out gear and using the last hour to get ready to go. It’s a photo finish as all of us pile into the van, and then we’re off, up the winding road back to the trail.

Having nothing in my stomach but coffee, I get carsick, so I sing softly to myself – my carsickness always improves when I control my breathing, and my struggle to remember lyrics from songs from my Singing Milkmaid days1 takes my mind off how much I want to hurl all over the place.

It feels like a long time coming, but the van finally rolls to a stop. We give our thanks to the shuttle driver, get all of our stuff and ourselves out, and then it’s off… to a laze in the morning sunshine. 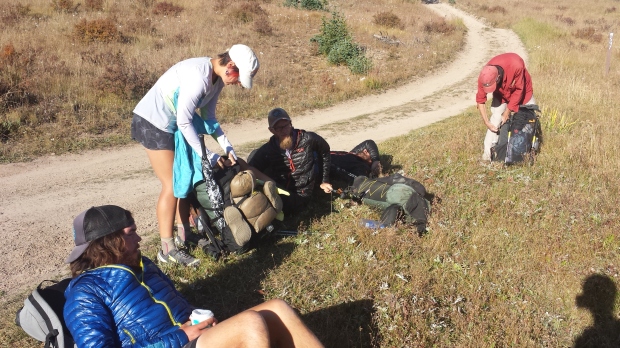 We’re all kind of  loathe to split up after the lovely time we’ve had. Kerry talks of going, but none of the rest of us particularly feel like moving. Plus, it’s early still, and Crankster and I aren’t looking to make but fifteen miles – NoDay’s gonna try to move it move it, make it to Stony Pass over the next couple of days, and the CDTers are probably gonna make it farther, what with their excellent conditioning and all, but none of us are in any rush.

So we laze. And laze. NomNom asks after the singing in the van; I sheepishly confess, and the group goads me into singing. I pick The Royal Oak – probably too slow for the morning, and too repetitive, but I think it’s a pretty one, even though I can’t do harmony with myself and my voice shakes the entire time. They all clap and grin at me, though, so at least I didn’t puncture any eardrums.

Then, one by one, folks trickle off. Kerry’s first, then BlueJay, then NoDay – she gets tight-tight hugs and well-wishes and “don’t die”s for her hitch back to her truck – then it’s me. It’s hugs all around with the others; I’ll see them at least one more time before they’re gone-gone. They’ll have to pass me, after all.

The thought, for once, holds some happiness.

I’m in a sing-songy mood. Another beautiful day on the trail.

I’m not paying too much attention to my volume as I’m sing-song-ing along, and I stop to take a picture and turn and jump to find Grim not ten paces behind me. Oops. So much for letting others enjoy the peace of the wilderness. He seems to be hiding a grin as he passes me, then NomNom, then MeHap, then Crankster. And then Crank I are alone again. 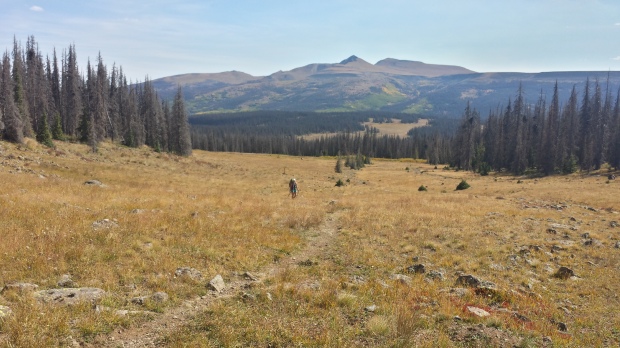 We climb Jarosa Mesa, then it’s down then up again, past the antennas on the hill. I’m sucking on Honey Stingers2 and making good-for-me time up the ups, even getting some time out front as Crankster calls to chat with her mom.

She catches me at the beginning of the down to the water source before the day’s up-ups, and we’re chatting about how much we’re going to miss everyone when we come up over a rise to a five-person full-moon salute. We practically fall over laughing; NoDay, NomNom, Grim, MeHap, and BlueJay’ve all stopped for lunch at the water source, and we skip down to meet them.

I go to grab some water, but they all stay standing, grabbing their things; MeHap stops me, claps me on the shoulder, tells me I’m going the wrong way. “See that yurt up there? It’s got heat. And running water. And a cooking stove. And we’re staying there tonight.”

We’ve only gone eight miles or so today, but who am I to argue with such decisiveness?

So I fetch some water and hike up the hill to join the others in the yurt, where we all spread out our things and enjoy each others’ company – telling stories and eating no-bake cheesecake3 and making phone calls home and playing euchre and talking about finishing; the end’s practically in sight, for everyone. NoDay talks about heading back down to Lake City, starting her hitch from there; the rest of us talk about the storms that are supposed to come in tomorrow, and our contingency plans for them. We’re all thoughtful this evening, but happy to be in the here and now, with these people, in this place, until the darkness chases us all to sleep.

[1] My very first job in high school was selling roses at a renaissance festival; there, I fell in with an acapella group who sang medieval/renaissance-era songs at various faires around the midwest. I’m pretty sure those songs are around on the internet, but I’m gonna make you work for this one.

[2] I am in love with these for climbing hills – they’re a lot easier not to chew than the Shot Bloks, as much as I love those. The Honey Stingers take my brain off of the pain and onto worrying the small-enough-to-breathe-around gummy into nothingness.

[3] NomNom is a goddess among hikers for both cooking and sharing this concoction of magical gooey-ness. I’ll have to keep it in mind if I decide to do something crazy like this again.