I wake relatively late today – it’s 7am – but I think my body needed it. I’m already more relaxed than yesterday; I’ve got today and tomorrow to make it 22-and-a-bit miles to Twin Lakes, and even though I was dragging yesterday, I managed to pull off 15. Should be fine.

Neither Trevor nor I are in any hurry to get out of the campsite. I cook and eat about half of a box of couscous while Trevor packs up, having done his due diligence re: food last night. We say our goodbyes, but we’re going the same way, and I wonder if I’ll see him again.

By the time I’m out of the campsite, it’s 9am, and I’m stuck between chiding myself and enjoying the morning. The up being less intimidating this morning than it was last night helps, and there’s a meander around two more lakes, both with campsites – did I camp where I think I camped mileage-wise last night?1 – before it tops out to Trevor sitting calmly to one side, checking his email.

Sure enough, I’ve got service, too, and I wonder at the egregious amount of access to the frontcountry in the backcountry. Still, I give into the urge to check my email as Trevor heads downhill, but there’s nothing pressing. I don’t know why I expect there will be. Everyone knows I’m out here, knows I’m basically indisposed for the next almost-month, so it’s all clothing ads and gear sales and offers for “$1” flights, nothing meaningful. I remind myself to send out thank-yous to the donors to my Big City Mountaineers fundraiser, and then I ease on down the hill towards the Timberline Lake Trailhead.

It’s a pretty hike, and I imagine, with little concern for my skeptical calves, going back up the hill at a later date to camp with a fire and friends and good whiskey in plastic bottles, a time that’ll probably be fraught with resurgent feels from this walk downhill and the rest of the walk to Durango.

I cross the boundary of the Holy Cross Wilderness, frolic down to the parking lot to finish Segment 9, and see a face I haven’t seen in 11 days – Cat, the first person I met on trail, is standing by the signage, with Molly, her pup, trotting around the parking lot in the various pieces of shade.

I’m happy to see her – it’s pretty cool to see someone from “so long ago” – but I’m also a little confused; she’d told me she was doing 8-ish mile days, to give Molly’s paws some chill time, and unless I can’t math more than I think I can’t math, something doesn’t add up. Turns out she’s skipped a couple of segments to hike this one, and Molly’s heart just wasn’t in it anymore – probably, Cat suggests, to do with her feet – so Cat’s done, too. She’s disappointed, but in good spirits for all that. She’s got a ride coming – there’s a gentleman out for a run that’s going to get her back to town – but she takes the time to show me the way to the single track from the parking lot; there’s a warren of campsites and trails and few confidence markers at the very beginning of Segment 10, but she leads me there expertly, gives me a hug and wishes me luck, and I’m on my way again.

I cross Glacier Creek and then Busk Creek, wondering at the amount of rain we’ve had this year, and wondering how I’ve managed, thus far, to have dry days.

Busk Creek: Singing for its Supper.

I run into Cat’s ride on my way to Hagerman Pass Road – he’s a 79 year old man from Mexico, who explains he’s out for a “short” run, about three hours in length. I’m floored that this is short, and he tells me it’s much shorter than the Leadville 100 he finished this past weekend. My feelings of inadequacy are squashed by feelings of awe, by feelings of hope for the future. He wishes me well on my hike before trotting on towards the trailhead.

I finally cross the road, then it’s up, not too rough, to the saddle of Sugarloaf Mountain, where I cross a logging road and hear a strange hissing and snapping. It takes me  a minute to comprehend that the noise is coming from the power lines overhead, that I can hear the electricity moving through them. It makes me move my step a little faster, and I come quite quickly to the flat spot before the down, where Trevor is having lunch.

We trade snacks – jerky for blueberry trail mix – and I talk about being excited for Twin Lakes tomorrow. He decides to stay too, and while he calls the Twin Lakes Inn to secure lodging – so much service – I call my mother to convince her I’m not dead, and I call Special to make sure he’s bringing what I need to make my resupply easier. Trevor’s moved on by the time I finish, and I follow him down into the Mount Massive Wilderness. 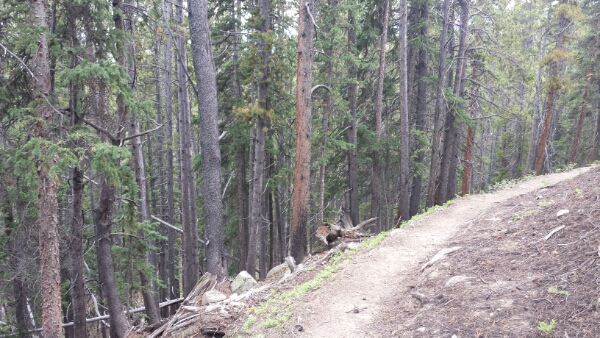 It winds along the forested mountainside, over beautiful small streams and past trails that I peek down, but I’m pretty focused today, thank goodness. A little annoyed that whenever I stop for water, I also need to find a space at least 100 feet from said water in which to relieve myself2, but focused.

North Willow Creek is the prettiest water source I’ve come across thus far, and while I don’t need water, I spend several minutes taking pictures and cooing over it.

I catch Trevor again around the Mount Massive summit trail junction, just before the final down. Both of us had gotten there and kind of laughed off the thought of summiting – I don’t really feel like an extra seven miles and 3,350 feet of elevation gain, and the trailhead’s close enough for me to come back and do it another time.  Then it’s down down down, on nicely graded trail with a little bear poo on the side for authenticity, and while he’s much faster than me along the way, he stops a couple of times to munch on rosehips and berries and waits for me near the bottom, where we decide to camp together for another night.

It’s kind of wet-ish, but Trevor builds a fire anyway, boss-style, and our talks get deeper, more philosophical, so I have a reason to only occasionally glance at my food in mild disgust instead of eating it. We’ll be in Twin Lakes early-ish tomorrow anyway; the thought of town food plus the taste of Trevor’s magical rehydrated spicy lime beef soup whets my appetite enough to put some more goldfish in my face before the sun goes down.

[1] I went back and estimated, and the starting mileage for the day reflects that.

[2] Stupid psychological associations. The sight of aspens makes my bowels rumble; the sound of water and I have to drop pack and run for the bushes.