I sleep alright after I put my earplugs in, dull the edges of the sounds around me. I wake a couple of times given that, with earplugs in, there’s no really localizing sound, and there are a couple of sounds in the night that could be… well, could be whatever; my brain doesn’t care about them, and puts me back to sleep. When my alarm goes off, all it cares about is coffee and food, and I’m the first up and first out, grabbing water at Lava Spring before I head northward into the morning.

That water is cool and crisp, and while I enjoy it, the coffee’s making my brain go a mile a minute – I’m analyzing last night, analyzing myself, thinking about the future, about people, about how strange we are as creatures. Of course, this makes me want to write stuff down, and the trail is conducive to  me having my head in my phone – all tight-knit forest with no views – so I start writing. It’s a distraction from the uphill I’m climbing.

I finish on the top of the morning’s ups, try to send a couple of blog posts off to civilization, but Washington doesn’t cooperate. I’ve been told that it remains uncooperative all the way to the border, but at least they’re in my outbox now, and they’ll send as soon as I get to civilization.

Then, there starts to be something to see:

ahead – those fall colors though.

And then it’s back down into the trees, where there’s water and plenty of shade for a lunch break. Two hikers roll in about a half an hour after I do; they nod at me, but set up kind of far away, so I shrug and set off when the timing feels right.

I try to be careful – I know there are tiny friends about.

Down and up and down and up, to more delightful views of the afternoon.

I’m on a particularly sharp uphill, and suddenly, there are grasshoppers, grasshoppers everywhere, fleeing from me every time I take a step. I’m reminded of a similar day on the Colorado Trail, where one managed to leap its way into my bra, and immediately history repeats itself and I’m stuck between abject panic and trying to stand still so it doesn’t freak out and tickle me before I get it out of there and laughing my ass off anyway. I manage to release it from its bra prison with no harm done to either of us.

I stop at Walupt Creek, which is barely running at the crossing; I go upstream to try to collect, but the flow is tiny; I have to lean way, way over to collect, and my phone falls out of my bra while I’m doing so. I’m interrupted by who I learn to be Dart and Ambulance hollering a greeting, and I take what water I’ve collected over to them to chat with them a bit while I treat. I say goodbye soon enough, head up the hill, make it a quarter of a mile or more before I want to take a picture – aaand my phone is not in my bra. My phone is back where I left it fallen at the side of the creek. I made it a full 2200 miles without losing my phone. Weeell, without “losing” my phone, anyway. At least I know exactly where it is. I drop my pack and run down the hill to go grab it.

Dart and Ambulance seem a little confused when I first arrive, but I tell them what’s up, and they’re glad I remembered. I joke with them, tell them there have to be a few things that happen at least once on every long trip, right? Losing your phone has to be one of them. Or something.

So it’s back up to my pack to take the picture: 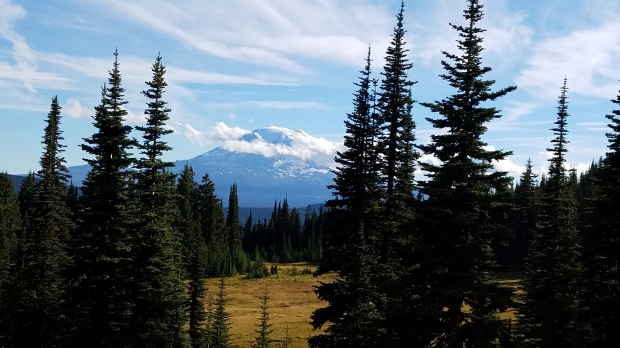 thanks for looking so stunning, Adams

And then up more, sharply up, into the Yakima Indian Reservation, where things start to get gorgeous and stay that way, all the way up to Cispus Pass. 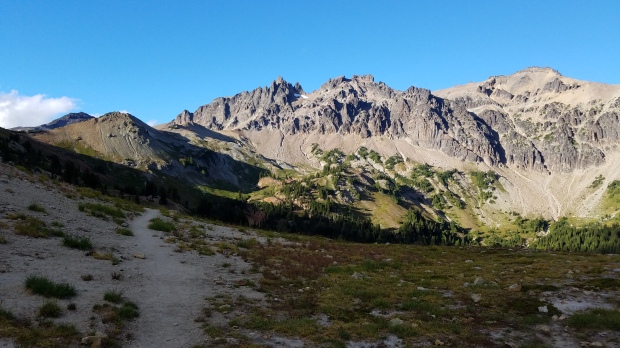 At Cispus Pass, there are a couple of dayhikers returning from exploring a nearby peak; I get updated weather information from them, and Dart catches up and starts chatting, too. Then it’s over the pass and down the hill, into the Goat Rocks Wilderness.

I round a corner and the land starts to flatten out, become more open, more meadowy. I don’t think it’s smart to approach the Knife’s Edge in the dark – it’s supposed to be pretty exposed, and also gorgeous, why would you do it when you can’t see – so I start looking for a place to camp. I come across Dart sitting with MAGA and Donger, who are camped already and cooking. I’m ready for that conversation with MAGA, so I go to see if there’s anything nearby, anything that isn’t just in the meadow on top of the grasses. There are huge tents in the trees – weekenders, probably, certainly not thruhikers – and they’re all set up such that nobody can squeeze in without literally squeezing in. Well then. I hang around for a while to chat and change into warmer clothes – the sun’s dropping and the temperature’s dropping – and I plant the seed for a conversation should I see MAGA tomorrow. Then its onward in the dusk, to find an empty campspot.

I’m worried that the last campsite at the turnoff towards Old Snowy is going to be full, what with all the people I’ve seen around, so I decide to stop at the second to last site – which is less than optimal, super windy and just open. There are some trees, but camping where they break the wind would mean camping on top of a bunch of roots, and I’m worried for the integrity of my inflatable sleeping pad. I consider camping out in the open, but the soil’s so hard-packed, it’s gonna be hard to get my tent stakes in, and I definitely want everything tied down to prevent the flap-flap-flapping all night. If I backtrack downhill a little, there’s a stand of trees that could provide some shelter, so I wander over there, see what’s what.

That stand of trees is beleaguered by exposed roots, too, but there’s a sandy patch nearby that’s just big enough for my tent, and it’s slightly less windy here. I manage to find some rocks to hold my tent stakes in, and decide that’s good enough, start to settle in. Since I’m camped alone, and I’m exhausted, I decide not to cook1 – the wind will be annoying enough without me having to deal with animals interested in my food smells, too.

Dart goes by – maybe I’ll see him again, maybe I won’t. I hope he likes the Knife’s edge, though. I still don’t really know what I’m in for tomorrow, which is kind of a nice change. I’m worried, given that the last time I approached something relatively unknown, I took a food-and-gear-laden pack up Half Dome, but this is the trail. This is doable with a pack. And it’s up, so it should be beautiful. As the wind shakes the tent occasionally, I settle into sleep conjecturing on tomorrow.

[1] This is pretty much the opposite of what you probably should do. Kind of. I think it’s pretty useful to let your body repair muscles and suchlike overnight, so eating something full of protein before bed is nice, but I prefer to use my calories to walk with. The way I did things made it harder to sleep, but the mornings were really nice, even if it took me longer to get out.