I wake several times in the night to particularly loud droplets splattering on my rain fly and the snores of my compatriots. Once, I even think I hear something moving out there, and when I fall back asleep I continue a murder mystery dream I’ve been having on and off again on trail where my two next door neighbors die and I look culpable. I wake up at 6 and peer out, happy to hear Zippee’s call and Sleepy’s response about the dark and the cold and the wet. We hold out as long as we can before it starts to get ridiculous, and I’m out and moving by 7:45.

There’s a hill to start that makes me feel like a Katy Perry song – I’m hot then I’m cold, I’m yes about my rain jacket then I’m no1. The closer we get to Washington, the harder the ups are getting mentally and the more shrouded in forests we are. Still, we get to see these rad old school PCT signs hanging about.

I’m bored, and decide to distract myself with more writing – writing and walking is risky, what with my clumsiness and the not-low chance of tripping, but the trail is mostly flat here, and I have pretty great peripheral vision, so I get 10 miles in relatively unscathed. I almost step on a lizard making its slow way across the trail, take pictures as it ambles on its way.

Just down the trail, a couple of hikers are taking a break, tell me it’s a rough-skinned newt – and that I probably shouldn’t touch them because they’re poisonous. At least, if you eat them. I accept this as fact, move on down the trail.

A stark reminder of the coming season.

I find Timothy Lake bathed in some rare sunlight, sit to dry my things and eat. I have a weird, hypochondriac moment where I wonder if the newt’s toxins have somehow magically migrated to my hands, but that’s ridiculous – I didn’t touch the thing. Just sit and enjoy the sunshine, silly. It won’t be here forever.

It goes away less than a mile down the trail, but I run into Zippee and Sleepy Andy, having a meal in a great spot. I sit for a while; Zippee invites me to her friend’s place, where she’ll be staying the night indoors. It’s tempting, but so is the Timberline Lodge breakfast – I want to make it for the best meal of the day, so I say I’ll think about it.

From here it’s up, up to the side of a hill, where there’s easy trail and a great view into the valley below. 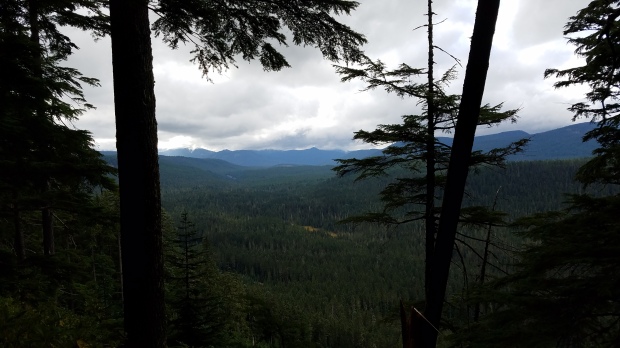 I run into the two taking a break again, looking for new leggings. Apparently Lisa Frank makes leggings now, and they’re joking-not-joking about ordering some for Washington. They’re in front of me as we head down, down the hill to Highway 26.

Zippee and Sleepy Andy are utilizing the pit toilet facilities while waiting for their friends when I arrive; said friends pull up shortly after, but I opt to walk. It’s a nice enough day, if it’s still super grey out. Of course, as soon as they pull away and I start walking again, it starts to rain, but that’s the way of things.

Rain, rain, go away – I’m dodging puddles as much as is LNT-friendly and taking off my gloves once they soak through and generally regretting my decision not to sleep indoors. I cross Mount Hood Highway, decide to sleep in the last tentsite before the Timberline Lodge – at my current pace, I should make it there by 7:15. Not bad.

Suddenly, screeching pain in my left calf, lots of cursing as the Zuul train grinds to a halt. I feel like I’ve been bitten stung breached, and I look around for the culprit unsuccessfully. It’s getting darker, but I use my phone’s flashlight and can’t find the puncture wound(s) – it’s only slightly swollen near where the pain’s coming from, and kind of vaguely hard. I have internet, so I check on snakes in Oregon – only the Western Rattlesnake is venomous – and then on symptoms of snakebite. I’m nearly three miles from a road at this point, and if I need to turn around now, I need to know. It’s a tough call, though – it’s raining and cold, so I’m not a good judge of numbness; it doesn’t seem super swollen, but the cold could be keeping that under control; lastly, I don’t know how long it takes symptoms like nausea and vomiting to set in.

I call Spesh, but he’s clearly at work, so he can’t pick up the phone. I finally have the presence of mind to find the number to my doctor and call him2. I’m initially a bit distraught on the phone, but once he starts asking me questions, I get my shit together. Based on what I tell him, he thinks I’ve been stung by an insect or, less likely, bitten by a spider – likely worst case is the threat of infection. He tells me to take some vitamin I, get to camp before it gets dark, then get to civilization and see how things go. If things change, I’m supposed to call, but he thinks I’ll be just fine. I’m satisfied with this, and while I’m grouchy about losing more light I’m happy I can continue on instead of turning back for the road.

It’s another mile and a third to the stream/camp I’ve decided to aim for after the delay, and the whole way I’m praying there’ll be something there. I come across a pretty not great site and stream, but just a bit after, things improve. There’s no one really camped here – one more person set up in a solo spot far away – but at least there are spots that aren’t puddles. It’s nearly 8pm anyway, so there’s not really time to be super choosy. I set up and throw stuff under the vestibule and pee elsewhere – my second least favorite thing to do in the rain3 – before setting up and trying to get dry, cooking with my vestibule vented, and generally lamenting the fact I didn’t go with Zippee and Sleepy Andy. I pray I won’t be cold and wet the entire night, and figure I’d settle for only the first as I try to find sleep.

[2] So this is actually why I kept my “insurance” current back in Mammoth – I say “insurance” because it doesn’t count as insurance for the purposes of hospital visits, but it gives me the ability to call my doctor at 8pm MST on a weekend to freak out about what might be a snakebite.

[3] The first is in a similar vein, but takes longer.

One thought on “Day 122 – Poisonous and Venomous”