The first thing brought viscerally to my attention in the morning is how goddamn cold it is outside the safety of my sleeping bag1. Inside, it’s warmer, but not as warm as I would like it to be – my body wants to retreat into the safety of sleep, but ’tis time, ’tis time to get moving. Pineapple starting to shuffle around makes it easier to get motivated, so it’s reluctantly emerging from my cocoon to get ready for the day.

I’ve decided that I’m going to do today up right – I’m carrying too much food, as per usual, but I am going to eat an appropriate amount of calories today, goshdarn it. I explode my food bag inside my tent and start counting calories; it makes me late for my out-time, but Pineapple is patiently waiting for me, ready to walk. I huddle in my puffy and scuttle my camp, and then I’m ready to go, too. I stuff food in my face, and feel a little like Fry from Futurama on his quest to drink 100 cups of coffee. 400 calories down, 3100 to go. It’s 6:30.

Fifteen minutes in, we get a glimpse of what our morning’s going to be like. 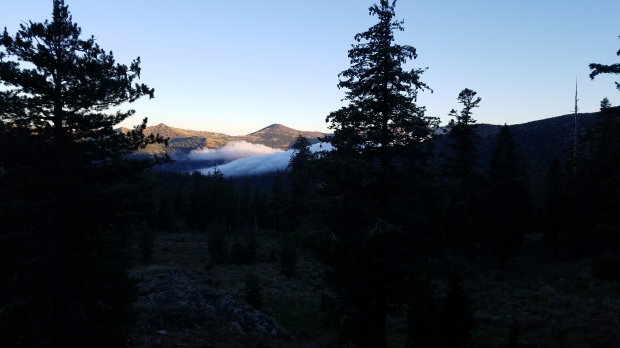 ICEBERG ROIGHT AHEAD. Or clouds. Whatever. 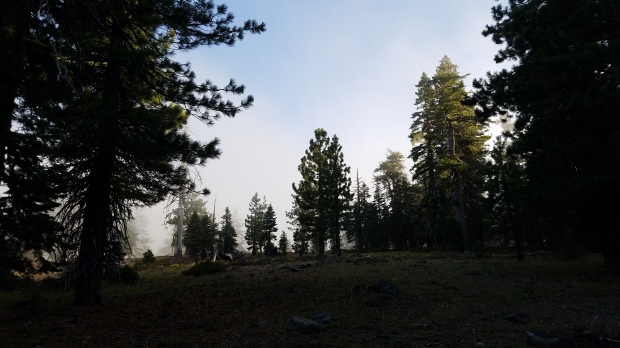 The PCT’s become a magical fairy land, swirling with clouds. Suddenly, trail I wouldn’t have looked twice at yesterday becomes fascinating, as the clouds eddying in the slight breeze try to trick my eyes into thinking the forest is alive with movement. Maybe it is. 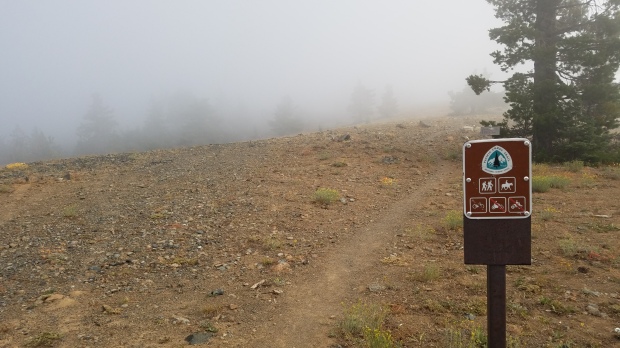 We hit cloudwall pretty soon, which is rad, meet McGuyver not too far into our trek; I’m all a-grin about the weather. Pineapple says it’s nothing we haven’t seen before, which is true, but Mount Laguna was probably the last time I’ve walked through the clouds, and that seems like a lifetime ago. It’s nice to know – particularly after yesterday – that I can still be awed by nature. Pretty rad. 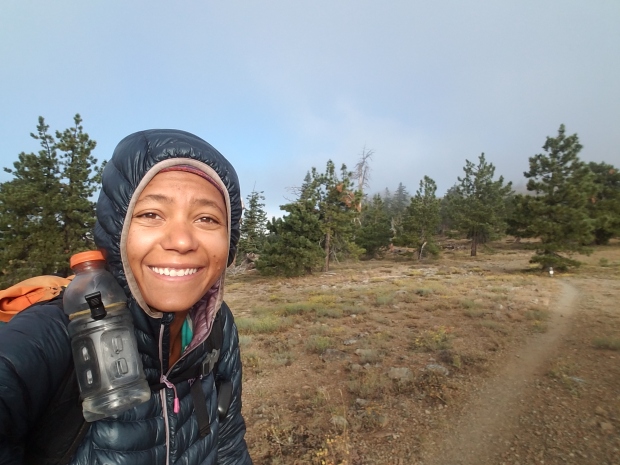 Sure, I’m tired, but there wasn’t even a semblance of this expression on my face yesterday.

I pass a couple of people, and everyone’s entranced with the weather. The sun starts to break up the party, soon enough, though. 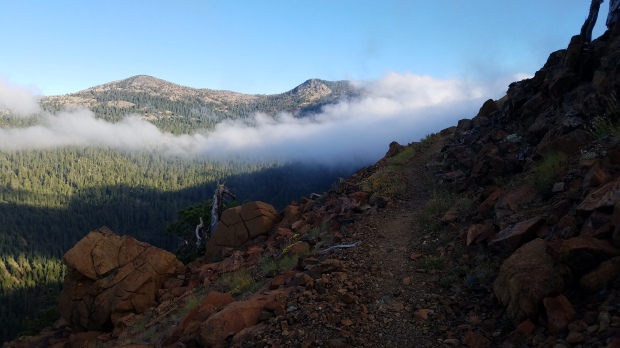 And then the sun touches my puffy and OH GOD GET IT OFF GET IT OFF I’M MELTING MELTING OH WHAT A WORLD WHAT A WORLD. I have to wrestle both my pack and my puffy off; not even a couple of minutes, and the latter’s basically stuck to me with sweat. Well then. Back to our regularly scheduled weather programming, I guess.

I’m in my head today – there’s lots of cogitating going on in there; I’m refining ideas about what I want to do when I get back, how I want to make a living from here on out, whether or not those things are feasible, all that. I’m also counting the days to Ashland in my head – it’ll be my first zero since South Lake Tahoe and maybe my last zero until Canada. I’m looking forward to resting up, even if I only have a vague idea of what  that’ll look like when I get there. 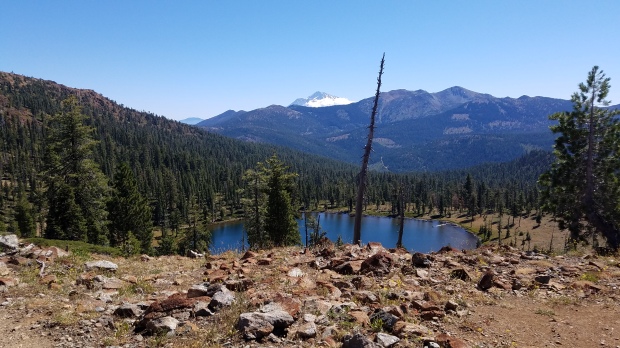 The profile is so gentle today! Such a change from yesterday. I’m feeling grand, finally like someone who’s been on trail for over three months; I mostly attribute this to the PacMan-like eating I’ve been doing all day. Wokkawokkawokka SnickersPopTartsGoldfishM&Ms Wokkawokka. All of it down the hatch in the name of continuing to move. I stop for water at a pitcher-plant-populated spring where Butterscotch is hanging out, get to chat with him for a little while before taking my leave of him. I wanna walk. I feel good. 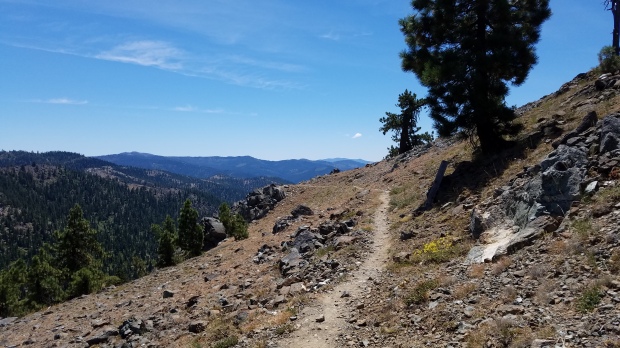 The trail starts to meander down and around, and I look down and I’m doing 3mph – I never do 3mph, even downhill. I get close – I average about 2.8 – but never 3. I feel like I can do anything if I keep shoveling food into my body.

I get to the spot where Pineapple said she was gonna have lunch, and there’s no Pineapple – I decide to go to the stream up ahead before I stop, just to make sure I don’t miss her. Plus, it’s 21 miles from where I started this morning, and I want to try to make 20 miles by 2:30, which is 8 hours of hiking for today2.

I end up making 19.2 miles by 2p, and I’m satisfied with that, particularly when, after passing my second bunch of southbound thruhikers, I make 20.7 miles in 8 hours. Rad. It’s only a little further on to the stream/spring/thing, where Pineapple is hovering over her feet. They’re showing some signs of heat rash or something like it, and she’s concerned about them. She soaks them downstream while I munch away on more food, chat with her.

There are Germans at the spring, too, and they’ve got a much much tighter schedule than we do. They’re trying to make the border by a certain date, and they’ve figured out that it’s going to take them 34 miles a day – no neros, no zeros – to get to Canada before their visas expire and their flights depart. They ask us if we think it’s possible. I resist the urge to look at Pineapple incredulously – if they’re asking that question, the answer is probably no, but I don’t know them, so… Maybe? They then inform us that they’re injured. I haven’t even made a 34-mile day uninjured, but again, who am I to say? I do mention that maybe they should think about flipping up to Ashland – I’m told Oregon and Washington are prettier than NorCal, at any rate – but they brush that aside, and it’s not my place to insist. They bid us farewell, off to try to hit that 34-mile goal of theirs. Best of luck.

Pineapple and I loiter at the stream a while longer, while she stares dolefully at her feet. I need a zero, she says. And then she starts to sing it. “I need a zeroooooo! I’m holding out for a zero til the end of the niiiiight!” We fall over laughing, and the song echoes in my head long after we’ve left the stream.

The day continues to be nice, at least until we hit Highway 3, the first highway to Etna – we’ve decided to hitch down at Etna summit, so we’ve got another day and a bit before we reach our turnoff. But after the highway, it’s up up up – and after the gentleness of the first nine hours or so of the day, I find myself woefully unprepared for just how up this up is. 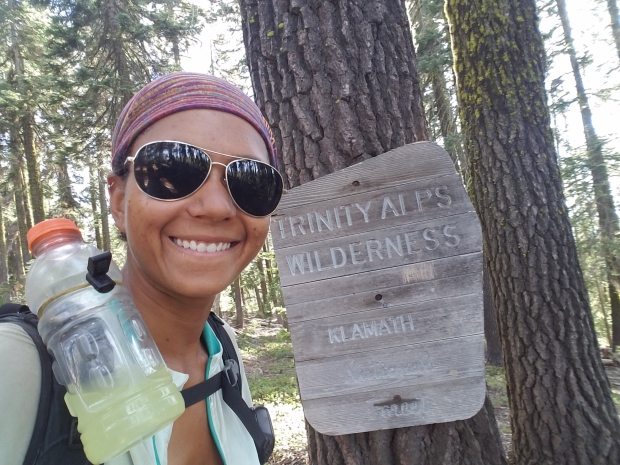 But hey, at least there’s a landmark to mark the tiny accomplishments.

I rejoin forces with Pineapple to talk the rest of the day away, and we agree that right around 30 is a better place to stop than 32 – 32 would require even more up, and this up is kicking our asses as it is, so right around the Mosquito Lake Outlet it is.

For as concerning a name as it has, the outlet’s actually a really nice watersource, and the campsite – though not right on top of the outlet like Guthook suggested – is pretty close by. We’re in just after 7 – what a novelty, to have time to relax in camp! Also, to be able to be as picky about my tentsite as I want to be, moving every single pointy rock that might cause me or my sleeping pad some discomfort. I get to eat more, too – I’m definitely close to, if not right around, 3500-4000 calories, which is what a growing thruhiker needs. I should really do this more often.

I take advantage of the extra time before 9 to write write write, and actually close my eyes just a little after hiker midnight. A good night sleep should do this body good.