I’ve left the fly off my tent, so I wake in the morning staring at the tree-mottled sky. I’m a little spooked at first – one of the trees is leaning RIGHT OVER ME HOW DID I NOT SEE THIS BEFoh it’s just the seam in the mesh. I take some time breathing, relaxing, soaking it all in. A brief moment sans anxiety; I’m just an animal, man. An animal breathing deep under the trees and the mesh and the down of my bag.

Welp, that’s about enough of that. I’ve got a town to get to.

Pineapple’s running a bit behind, but I’m sure she’ll catch me before town. I follow Milton Creek down, down, down, starting to see signs of civilization like dirt roads and dams and bridges. 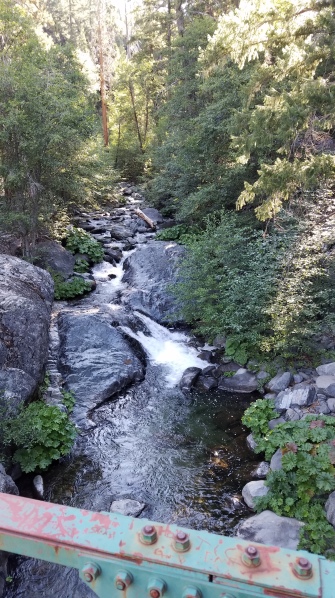 Then it’s one last up, showcasing what I’ll have to do later today:

And then down again, towards Highway 49 and Sierra City.

I’m being a bit of a purist, trying to make it to the proper road crossing and not just the road to hitch, when the trail starts to fade, fade, and suddenly I’m standing on an old access road that doesn’t seem to provide access to much of anything. I’m not lost-lost – the road’s right uphill from where I am – but I don’t know where the trail could’ve gone. While I’m retracing my steps, Pineapple catches me, and together we manage to find the sneaky PCT.

We try to get a hitch as we walk downhill towards town, and end up walking straight into town.

We also try to get a picture, and I end up looking like a crazy person.

The first order of business is breakfast at the Red Moose Cafe, where our server gets left in charge of the restaurant when all the other employees – who are also volunteer firefighters – go rushing off to check out reports of smoke in a nearby town. Everyone does double duty here, I guess. They come back saying that it’s smoke from a fire a long ways away – nothing they can do about it up here.

Then it’s off to the Sierra Country Store, to find our packages in the mass of packages lurking in the back of the store, and out to the side of the building to actually do our resupply. The sun is brutal today – it’s not even noon, and I’m pretty sure I can hear my skin popping and frying in the direct light. All the hikers squish each other for space in the shade. We’re all one big, hikertrashy family, right?

Two of those hikers, Popeye and his daughter Peru, are worried about time – it’s late July, and Peru has to go back to school in, well, Peru, later in the fall, so they’re hitching up a little further north. Popeye tells me about his hiking philosophy – they’re traveling from Mexico to Canada utilizing large portions of the PCT, not thruhiking. He’s looking to get to know his daughter, who he feels like he’s meeting for the first time1. They make a sign with a dry erase marker, and I ask to borrow it – maybe it’ll work on my tyvek. It does, and it looks waaaaaay better than the permanent marker scrawl I’ve got on there from Kennedy Meadows North. Well then. Dry erase for the future it is.

Pineapple takes a shower, and then we loiter and eat ice cream until 1 or so, when it’s finally time to hitch. My sign makes it easy, and we chat with our ride about hikers and the season for the short-but-steep trip back to the trail.

I’m particularly glad we didn’t have to walk the road back up to the trail, because we’ve got an 8-mile, 3000-foot climb ahead of us, and the day hasn’t gotten any cooler. Luckily, it starts by switchbacking us up through a heavily-wooded area, and I zoom through it, maybe too quickly – the next section, while beautiful, is mightily exposed to the sun.

Exposed to the sun and overgrown with stabby bushes and made of stabby rocks that want to not only get through your shoes to the meat of you, but also turn your ankle at any opportunity. It makes for slow going and a lot of cursing as I swelter in the heat. I’m in the middle of one such stream of expletives when I spy the body of a snake going across the trail – followed by the obligatory rattles at the end of the tail. So now I have to worry about rattlesnakes hiding in all this mess, too. GREAT. JUST GREAT. 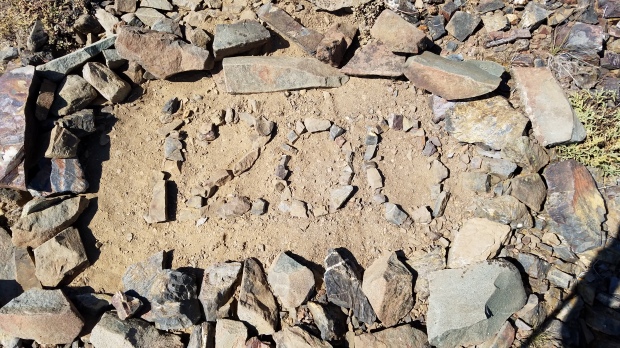 Mozart catches me at the marker, and we take pictures and chat about More Perfect; he tells me he’s interested in my thoughts on an episode about jury selection. He also tells me about seeing MAGA, and how the trail rumor is two of us are gonna “throw down/rumble” when we next meet. Yeah, I want to ask the guy some questions, see how he justifies being an enthusiastic Trump supporter, but I’ve been in enough arguments about politics to know not to hold my breath about changing his mind.

It is warm out, so, so warm – I’m drinking a lot of water, maybe too much water; I don’t know how I’m going to cook this evening. I find a trickle and sit there until one of my bottles is full to the top, stare into nothingness towards the colorful rock shards around me until Sterling interrupts me, and we chat for a bit before he passes me.

Finally, the top, and sweet respite.

I  wind my way onto and off of roads and around bike paths, looking at the mountains both ahead of me and behind me. It’s a view-filled evening, and even the sinking sun isn’t making it any less unbearably hot.

It’s pretty obvious, looking around, that there’s a fire somewhere “close by”, close enough for the wind to blow the smoke this way. Everything’s visibly duller and harder to see through the smoke. 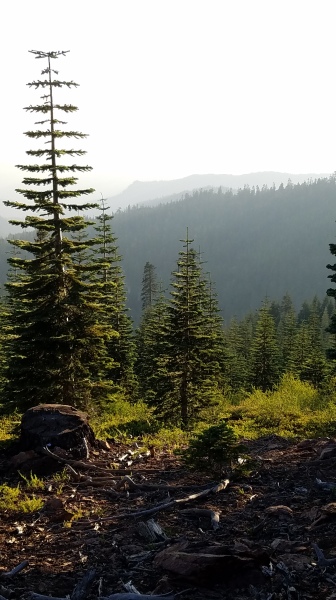 We’re on and off roads, and finally there’s one last perch that gives us a nice lake view. 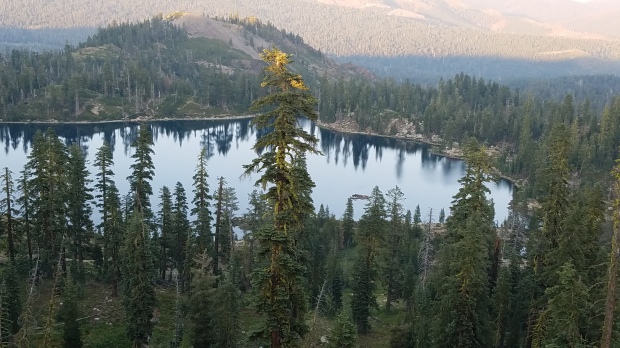 Then it’s down, down past signs that foreshadow fun things for tomorrow.

Wait, didn’t I see A Tree a while ago? Or was that simply a tree?

I roll up onto the campsite that I was aiming for, near the tiny Summit Lake – Mozart’s there, and I need water, and it’s getting late, but I feel good about having made it this far. He points out this tiny little mock-campsite that looks vaguely voodoo doll-ish, or at the very least set up for the faeries, and I’m not really sure what to do about it. There isn’t enough light to take a picture of it now, so I guess I’ll do it tomorrow, if this place isn’t cursed or something.

go get water; when I get back, I set up and we talk jury selection and race in America until Pineapple and Sterling roll in, and we all gather around a fire to talk and eat and chill. I enjoy these gentlemen’s company, and I’m glad Pineapple and I aren’t alone tonight. It’s strangely silent, eerily so, and the presence of that tiny campsite-within-a-campsite isn’t doing much to help set a positive tone. I write for a while, write until I’m so exhausted that the silence doesn’t really bother me anymore and I sleep.

[1] It’s pretty cool, actually – they’re keeping a record of their hike here, but each of them is doing so separately – Popeye in English and Peru in Spanish, and they won’t read each others’ thoughts until after the hike. Rad concept, and it also lets each of them be honest and/or write cheesy stuff without having to deal with the consequences of that while they’re spending all of their waking hours together.