I’m up early, apparently – it’s 6 by the time I rouse myself, but the other two gents aren’t moving. The two girls in the tents are eating breakfast, barely finish before I’ve eaten and packed and am moving. My friends are waiting in Tuolumne Meadows, and I’m so excited to meet them.

I force myself to pay attention today, keep my headphones out of my ears – I don’t want to not be able to walk without podcasts, so I’m depriving myself, in essence, to prove a point. The forested walk is pretty, but nothing like I’ve seen in the past or even yesterday. Maybe I’m a bad candidate for hiking the AT, if this is how I react to forested meadows.

I pass Noah and his dad and friend from VVR, say hello, chat for a bit. He’s almost done with the JMT – so strange for someone to be almost done with their whole trip! – but he’s feeling good and strong, and will likely finish in style. Rad. I wish him well, and continue down the trail.

Shortly after, at the 2.5-miles-to-go mark, I give in to my inner learner and go to stick my headphones in – but my headphones are missing from my bra. Apparently, in pulling out my phone, I deposited my headphones directly onto the ground somewhere. I’m distraught, so I drop pack and rush backwards, scanning the ground frantically. I run into Noah and crew, ask about my headphones, but to no avail. I’m not going back any further. Another thing bites the dust. 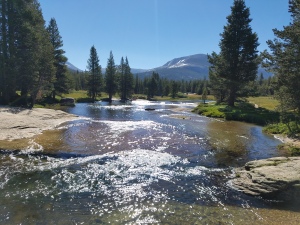 Then it’s navigating the Day Use areas around Tuolumne, and so many day hikers – more than one of which doesn’t believe I’m a thru because I’m too clean. It’s only been three full days, I guess, but I’m weirdly embarrassed not to be dirty. Gotta keep that trail cred, or something.

Then it’s the home stretch!

I stop at a Ranger Station that looks closed to ask about permits for finishing the JMT; they direct me to the on-trail permit station, where there’s a first-come, first-serve line for next-day permits, which I need – my PCT permit’s no good for hiking down into the Valley. I’m stuck waiting around for an hour, but at least there’s service, so I check to see if anyone wants to join me. No one responds, but Outro said maybe in Mammoth – better safe than sorry.

When I’m called in, the Ranger is quite helpful, not only getting me the permits I need, but asking me if I want Half Dome permits, too. Yes? I guess? Yoda had mentioned wanting to do it for sunrise, and also having to get into a two-person-a-day lottery to get permits for it, but apparently starting at a different trailhead and spending at least one night out means you can just buy one. So sure, why not, and after checking with Yoda and rolling the dice on Outro, we can all finish the JMT and go up Half Dome tomorrow. Rad.

Then it’s a nice trail along the road, an awesome chat with a load of black folk from SoCal, and, finally, the store!

There are a load of hikers outside, including Pineapple! ZOMG! She’s got her dad and stepmom with her, and it’s lovely to meet the both of them; I thank her stepmom for the tooth advice all those miles ago – it’s indeed holding fast. She’s staying one more night and heading out tomorrow, so I’m excited to visit with her, catch up on everything. She trots off to the campsite; I’ll see her later.

A lot of hikers sitting around are opening packages, even though the post office is supposed to be closed; I try to get mine, but the guy has apparently just stepped out. Womp womp. Yoda’s nerding out with Wired, who’s hiking the Sierra High Route, and I nod hello to both of them and briefly tell Yoda about the successful permit-getting. Then it’s letting things charge and heading to the campground to meet Sprinkles, Homegrown, and Sprinkles’s family.

I visit and chat with the growing family, hiker and non-hiker alike, then go set up in the backpacker’s campground before it fills up; by the time I come back, Shaka’s there, with his package, so I head back to the store to be told the guy’s not there. Again. Check back in a couple of hours.

I come back to an amazing meal prepared by Sprinkles’s dad, then head back to the store before it closes for my battery pack and one last package try, the latter to no avail. The evening and the company is a palliative, though, and it’s not until the cold and the dark chase me to bed that I’m able to let go of such a lovely day.