While it’s pretty cool to look back and see all the stats and improvements and things that went well with a hike, I think it’s also super useful to take a look at the things that didn’t work as well. If I’ve learned anything from reading other blogs, it’s that a long-distance backpacking kit is an ever-evolving thing, changing from hike to hike (or even day to day) based on the climate you’re expecting, the length of your hike, and your goals for the trip. I learned a lot on the Colorado Trail, not only about myself, but also about the way I thruhike; knowing what I know now, I’m thinking about making some adjustments that’ll work better for the way I do things and which’ll hopefully get some weight off my hips.

Cook System
Eating was my least favorite part of my hike – cooking was a chore, the thought of food made me (sometimes physically) ill, and actually consuming even a modicum of calories was a huge pain in the ass – but since I’m looking to hike the Pacific Crest Trail starting in 2017, that’s a bit of a problem. Sure, I can get by mostly avoiding food for a little over a month and 500-ish miles, but trying to pull that shit over 5+ times both the length and the mileage… yeah, not going to work so well.

An egregious amount of pizza in town only gets you so far.

I found it a lot easier to eat on trail, however, when  I was handed food; when all I had to do was chew and swallow, caloric intake didn’t seem so bad. So over the next year, I’m gonna try going stoveless. That gets the practically-useless weight of my pot, lid, mug, stove, and fuel out of my pack, and, since “cooking” will turn into “pouring water over dehydrated food that’ll be ready to eat when I am”, I’m hoping that will help the eating situation. I’m probably gonna miss the occasional hot meal, but then I didn’t cook that much on this trail anyway. I really, really, REALLY hope going stoveless works for me, because if it doesn’t, I’m not really sure what to do.

Shelter
So I wasn’t displeased with my Tarptent Rainbow – it offered plenty of space to settle all my things in and sit up with my tall self – but I wasn’t exactly pleased with it, either. I think I was particularly enamored of a tent-tent to begin with mostly because, well, privacy is a thing I like, and because bugs and other critters seem to love me for some reason. After hiking, though, I don’t know that a tent’s particularly necessary for me. 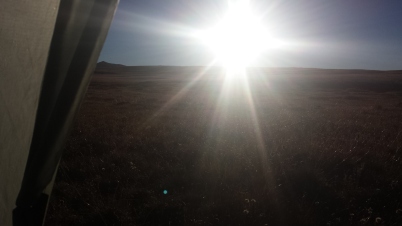 Provided pretty solid protection from being blinded in the morning, though. At least, until I opened the flap.

I’m going to try experimenting with a friend’s tarp for future hikes, just because I’d like to be able to cut some weight and space in my pack; if I end up hating it, I’ll probably go back to my Tarptent or something like the Big Agnes Fly Creek UL 1 that Crankster carried, though I don’t know that I’m so invested in changing my shelter as to buy a different one.

Sleeping Bag
Don’t get me wrong: I love my Marmot Plasma 15. Bag is love, bag is life. Still, by the end of my hike, I was sleeping in my down jacket, just because I found it to be warmer than my sleeping bag, and if I’m gonna do that, I should probably think about a quilt. It’d be lighter weight, and help me mentally justify the weight of my egregiously heavy coat1. It’s a nebulous thought at the moment – I’m not sure it’s worth the investment just to get something without a hood – but it’s something I intend to look into for 2017.

Sleeping Pad
I carried a full-length Thermarest Zlite Sol, and I kind of feel like it was overkill. I mean, I was able to fold it in half at night to give extra cushion to my hips (I start my nights on my side and sleep with my legs on my pack),  and I was able to offer other hikers space to sit on it, but at nearly a pound (14 oz), I’m not sure it was worth the weight. I’m thinking of switching to a small Neoair Xlite (8 oz), and then maybe carrying a section or two of a Zlite for solo sitting purposes. It’ll still probably weigh less.

Leggings
Soooo the Patagonia Capilene 3s I wore were warm, but not exactly accommodating of the junketh in mine trunketh. I’d like to get some leggings that are just as warm but have a little more room in the hip,  but I have no idea where to begin that search, as hiking companies apparently believe that women with butts are unicorns or some other similarly rare and/or mythical creature. 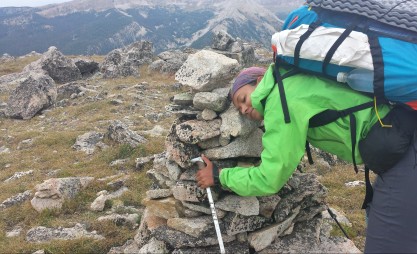 Cropped out: Me, channeling a plumber

The only vaguely outdoorsy company that seems to think that women might possibly have butts is Prana, but to my knowledge, they don’t make anything warm like that. So I’ll keep my eye out, but I won’t hold my breath.

Hiking Shorts
I was gifted, and am thinking about permanently switching to, a Purple Rain Hiking Skirt. I’m a little worried about both cold and chafe; still, it’s more than worth a try. My only other lament would be the loss of a zip pocket for trash, but I’m sure I could find a way to make one of the skirt’s many pockets work.

My Shoes
I chose the Salomon Mission XRs for their wide toebox but narrow heel, and while they were fine – though I’d go with a wide fit next time – I’m wondering if there’s a better shoe out there for me.

I was told to look into Altras, but I’m a little worried about my left arch flipping out on me again; I’m also working on my stride to try to fix the problem at the root rather than treating the symptoms. If that fails, I’ll definitely be getting Superfeet, or at least a Superfoot, to address that issue.

External Battery
I took an Anker Astro E1 5200 mAh External Battery with me on the Colorado Trail, and while it held up just fine and charged relatively quickly, it didn’t have enough juice to let me take pictures *and* check my Guthook app *and* blog on my sometimes-seven-day resupplies. I thought I was saving weight by taking a smaller one, but this is weight I’d absolutely rather carry – it’s so much easier (and more expedient!) to write in the moment than it is to try to piece together things months later. This is actually a pretty easy fix for me, since I’d bought the 16000 mAh one, and then chickened out because of the weight at the last moment. The 5200 is fine for weekend trips, but if I’m out for longer, I’ll be taking the 16000.

Everything else, I was actually pretty happy with. Prolly wouldn’t carry bear spray again, though2.

I’m not 100% sure I’m going to be making all/many of these changes, particularly since I’m, y’know, trying to save up to do the actual hiking/resupply part of hiking the PCT in 2017. I don’t know how much “extra” money I’m going to want to throw towards gear that I’m not going to want to allocate for things like hotel rooms, guilt-free town meals, and the like. But it’s good to at least be thinking about these things – the more tinkering and experimentation I do now, the less second-guessing I’ll do when I actually hit the Mexican border and squint up the dusty trail to Canada.

[1] Kidding. I don’t need to justify being warm and cozy.

[2] Unless I was on the CDT. I’d carry it in Grizz country. Otherwise, nah.