I wake feeling unsettled. Something’s wrong in my abdominal region, but I’m able to pack up camp while it figures out what it wants: sick or not sick, and if sick, up or down. Speshul tells me it was probably a bear checking us out last night, what with the heavy footfalls and the lumbering off begrudgingly rather than spooking; I feel like I should be more perturbed by the notion, but really, the slowly-exhibiting pain in my gut’s occupying most of my early-morning brain capacity. It feels like I’ve got an alien in there trying to get out, and we don’t quite make it out of camp before I have to limp my way to a place where I can be sick out of eyeshot, not once, but twice.

I’m still hurting when I come back, know the cramps1 are going to haunt me all day, and sure enough, they’re still echoing around in there when we finally set off. We find a campsite that’s about a quarter mile further on down the path, not a tenth of a mile like the guidebook’d said, but it’s comforting to know the guidebook knew what it was talking about. Sort of.

We follow the path uppish around rutted-out single track; I’m going slow today, but at least I have a reason for it. I’m still in pain, my farts are at DEFCON 3, and while we’re not sure what’s going on in there, it seems like a moot point: it’s something to deal with, not necessarily to name, since it’s going to work its way out of my system over the course of what should be a relatively flat day, at least after a time.

The Timberline Trail likes to hug the side of cliffs, with basically no room on either side between in and quite sharp inclines/declines. Perhaps it’s thrilling for motorcyclists, but it’s a bit disconcerting for me as a hiker. It’s my problem that I always feel drawn to open, downward voids, but it’s taking a lot of my mental energy today to try to ignore it, mental energy I have little and less of at present. We stop relatively early for our first break, consult our maps and the app, when Speshul remarks on something more disconcerting.

We have at our disposal technically four different map sources, of varying quality: the Colorado Trail Official Guidebook, the NatGeo Trails Illustrated maps for the section, the Colorado Trail Foundation Collegiate West maps Spesh found in the Twin Lakes Hiker Box, and the Colorado Trail Android App. The Guidebook and Trails Illustrated Maps, published in 2013, say exactly what I expect for the next bit of trail, given that I’ve been prepping mostly out of the guidebook. The App and the CTF maps say something different, to the tune of a shitload more elevation gain and loss than we were expecting.

I fight down the urge to panic, berate myself, cry: the only thing to do is hike on, see what happens at South Texas Creek, the supposed junction. Where, of course, the trail that once bore right along the Forest Service Road now goes left, on trail opened in 2014, up all those ups and down all those downs. I feel tired, empty, queasy, but I put it aside to chat with Natty, a CDT hiker, who has done some wicked flip-flopping and is headed up to the Wind River Range to finish his hike. He talks about how beautiful the next section is, while my abdomen stages a full on, silent revolt. At this point, though, I don’t know if the sickness is from whatever’s happening to make me gassy or from my utter disappointment in my unpreparedness.

I tell Spesh the four scenarios I’ve been floating around in my head:

Numbers 2 and 4 have Cottonwood Pass Road in common, so that’s what I decide to take. “I”, because it’s my hike; Spesh wants little part in this decision, but advises that it’s a smart choice: I’ll get to see how I’m feeling about the whole thing when we get there, make a decision as to whether or not I want to stay on the West side then. So it’s right on the Forest Service Road,  walking it Old School Style, as unhappy as I am about it. At least there are cows to distract me.

Spesh’s nearly gotten me out of my funk about the whole thing, when he raises a question that takes my mind off my walking for literally a half-second. Turns out, that’s long enough to twist my ankle. My left ankle, specifically: the one I almost broke as a teenager and then twisted near to breaking twice more over the following year. Terror followed by a blooming of pain followed by more terror: I’m an idiot, and this cannot be how it ends. Not like this, not in front of him. I test it; it fucking hurts, it can barely stand any weight. So I stand in the middle of the road, forget about the cows, and sob.

I regain outer awareness, and Spesh’s already by my side, trying to help, sort through my blubbering to figure out what happened when I hardly even know, all I know is how it feels. I know I’m going to have to limp/shuffle/hop/walk to at least get off the road, so I test it again; still shitty, but it’s bearing more weight this time. Thank fuck. The sobs slow, and I wander off slowly, becoming more confident, more convinced I just scared myself more than I actually hurt myself, but it makes me feel like more of an idiot, and after the last few days, all of my inadequacies, all of my everything, just come crashing in. Again.

I’m disgusted with my defeatist/perfectionist attitude, but I keep feeling all these feels, and I talk about it when we stop for lunch. About how I felt I had something to prove to him, wanted to show off what he taught me, show that he shouldn’t be worried about me out here. I talk about my concerns about being disowned for being a terrible, slow hiker, about every day having something else go by the wayside, or at least, just wrong. I talk about my upbringing being chock-full of negative reinforcement and, not finding it in him, doing it to myself. Results of a misspent youth.

It’s hard for my mind to process such things, though it replaces the sadness with a sort of emptiness; maybe it’ll sink in later. I joke, though, that I should’ve known he wasn’t going to leave me over this if he could hike behind my DEFCON 3-ranked farts without choosing his sense of smell/taste2 over me. I’m happy that he refuses to give me my trail name, though, as it would almost certainly be DEFCON.

So we follow Texas Creek for a while, go by the Texas Lakes: 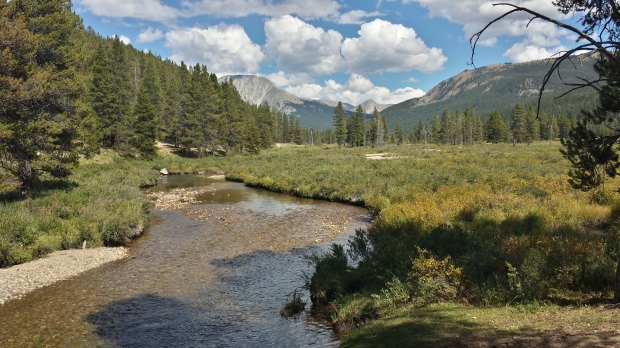 And while there isn’t much signage, a few miles up towards the road we spot an old CDT/CT marker. On the right trail, then. We hope, aloud, that the rest of the trail will be as decently marked as this.

We make it to Cottonwood Pass Road, and it’s buzzing – we could absolutely get a ride if I wanted to, but I don’t. I’ve settled on one continuous footpath from Denver to Durango as the metric for the hike, and I am gonna lay down one continuous footpath, dammit. The trail leads us around and about near the road for a while, dumps us into some roadside camp spots before taking us back into the woods towards the Sanford Creek Trail.

Sanford Creek is pretty, mostly because there’s supposed to be camping within a tenth of a mile of the trail junction – but that’s according to the guidebook that’s burned us twice today. We find some spots that’d be… alright, I guess, but I got my Goldilocks tendencies from Spesh, and we’re not that desperate yet. Spesh goes ahead to scout, and I’m plodding my way uphill when I hear his okay; there’s a beautiful campsite at the creek crossing, about half a mile after the guidebook suggested.

We set up and I get water from the creek, farting all the way, but at least I’m feeling a little better. Spesh introduces me to trail burritos, made even better by the chili pepper paste I’ve carried the last 200-odd miles. I nestle in with a full belly and the gentle rain outside lulls me to sleep.

Oh, by the way, clicking on the numbers down here will take you back to the appropriate number in the post. They’re tagged for your convenience.

One thought on “Day Sixteen: Breaking the Perfectionist”